JOE SATRIANI Announces “What Happens Next” Australian Tour This November 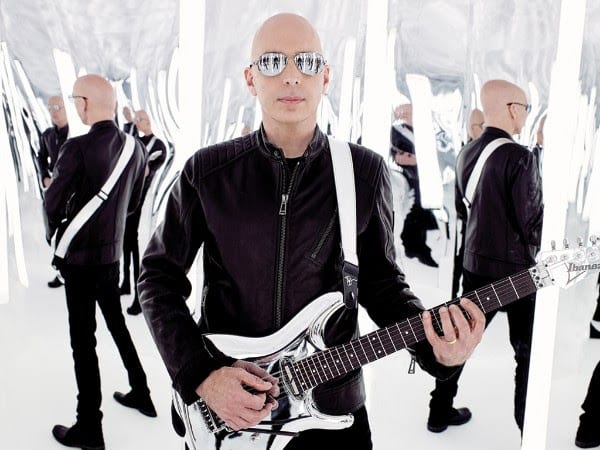 JOE SATRIANI. The legendary guitarist returns to Australia this November, thirty years after his first tour here in 1988, with Mick Jagger, bringing his latest album and world tour What Happens Next to Australian fans.

Tickets for all shows go on sale at midday Wednesday August 1. My Live Nation members can secure tickets first during the exclusive pre-sale beginning 10am Monday, 30 July.

Joining Joe Satriani on stage for his Australian tour are:

Inspired to pick up the guitar by Jimi Hendrix, Satriani, an Italian-American native of New York state, has released a staggering 16 solo albums over his career – earning him six gold and platinum discs, 15 Grammy nominations, and album sales in excess of 10 million units worldwide – whilst never losing his focus on dedicating himself to the artistry of his instrument, the guitar.

His new album “What Happens Next” is the most accessible, straightforward rock album he’s ever made.

To create this next stage in his musical evolution Joe Satriani enlisted the help of Red Hot Chili Peppers’ drummer Chad Smith, Chickenfoot bandmate, Deep Purple bassist and longtime friend Glenn Hughes and producer Mike Fraser to write a fresh, immediate and lively rock n’ roll record. Its set pulses with a vibrant drive from the dynamic opening track ‘Energy,’ to the stomp of ‘Catbot,’ the majestic crunch of ‘Thunder High On The Mountain,’ and spiritual grace of ‘Righteous’. Shedding the protective veneer and personas found in “Shockwave Supernova” provided clarity and confidence for Satriani to simply write about bare feelings – representing a person living and breathing in the world today.

While still a teenager, Satriani taught other budding six-string hopefuls including Steve Vai, Metallica’s Kirk Hammett and Larry Lalonde from Primus. Since his 1986 debut release “Not Of This Earth” and the breakthrough follow up, “Surfing With The Alien,” Satriani’s legendary status has been firmly cemented in rock ‘n’ roll fame for more than four decades.

His early beginnings in San Francisco groups, The Squares and The Greg Kihn Band, gained him an ever-growing reputation that caught the attention of Mick Jagger – who invited Joe to be his lead guitarist on his first-ever solo tour in 1988 – Joe’s first tour of Australia.

He is featured on albums by everyone; from Spinal Tap, The Yardbirds, even Alice Cooper, and has toured the world with his own band, with Deep Purple, and with his the all-star band, Chickenfoot – made up of bandmates such as former Van Halen bassist Michael Anthony, Red Hot Chili Peppers drummer Chad Smith and singer Sammy Hagar. Then there is his group tour project, G3, long one of the most anticipated guitar events on the world touring calendar.

Beyond the stage and out of the studio, Satriani’s credits include features on the big screen, first in the 2006 release “For Your Consideration” by Christopher Guest and 2011’s “Moneyball” starring Brad Pitt. Not to mention designing and endorsing guitars, amplifiers and effect pedals for Marshall, Vox and Ibanez – his signature JS Series becoming one of Ibanez’ most popular and consistent sellers.

Satriani’s return to Australia is expected to be nothing short of epic. This is Joe’s first Australian tour since 2014 and a rare chance to experience one of the world’s greatest guitarists beginning the next chapter of his legendary career – whilst also marking 30-years since his first visit down under.

JOE SATRIANI
WHERE TO NEXT AUSTRALIA TOUR