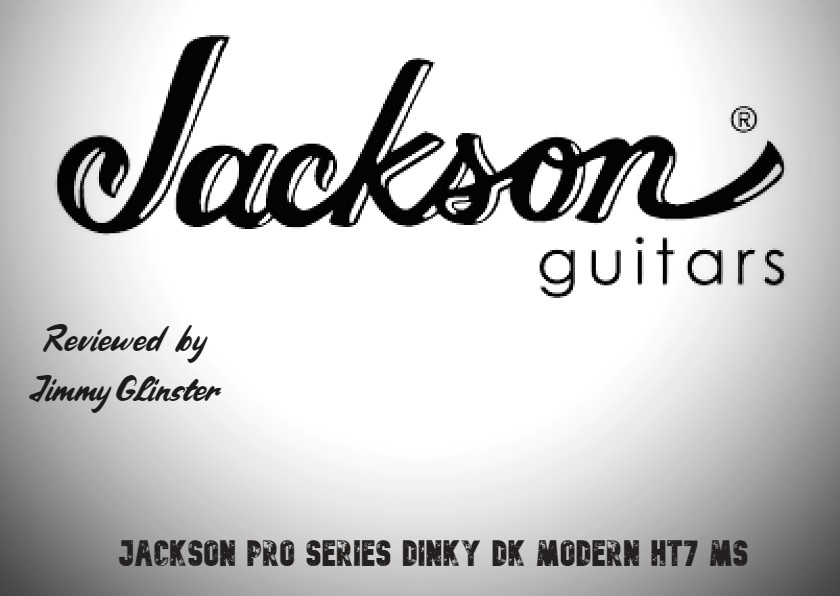 After checking out the Jackson Pro Series DK Modern EverTune 6 and being quite impressed with the instrument’s high-quality build and ridiculously comfortable playability, it’s time to switch my focus to its big brother, the Pro Series Dinky™ DK Modern HT7 MS.

If you haven’t already figured it out by the 7 and the MS, this is the DK6’s 7 string multi-Scale counterpart.

Straight out of the box this an exceptional looking guitar with its unique and flamboyant Eureka Mist paintjob which at first looks like a sparkling gold until I lift it out and the colour changes and fades into a deep glimmering purple, and even the odd hit of green as it picks up some darker shadows within the room.

This is a sexy looking guitar with its sleek Dinky Basswood body, and although a little glam, it’s just dark enough to fit in the hands of a metal guitarist dressed purely in black. Hey, we all need a bit of colour on stage, or three of them depending on where you are standing and what colour the stage lights are at the time.

I pick this bad boy up and sit down to have my first little twiddle, and I’m instantly confused as to what to do with this extra string, so I just chug on it for a while like I’m in some kind of Djent band. Then I start to play up and down the fretboard, and although I’m not used to the shifting angles of the multiscale jumbo frets, I find that my fingers just kind of hit where they need to without having to focus too much on having them in the exact position to nail each individual note, it kind of just happens naturally.

Now, I’m not saying I sounded good, or played well, but for my first time on a multiscale guitar it was a really comfortable experience.

The three-piece maple/wenge/maple satin finished neck only added to its playability and comfort.

Next step, plug this beast in and see how it sounds. Clear, crystal clear, that how it sounds plugged into a tube amp on the clean channel with a flat EQ. Shifting between the 3- position pick-up switch to position two where it utilises both the Fishman® Fluence® Modern PRF-MH8 humbucking bridge and neck pickups, it adds a little more bottom end and tones back the high-end response in this position. Switching to the neck pickup in position 3 produces a smooth rhythm tone, just as you’d expect from a neck pickup.

The guitar is also fitted with a push/pull tone knob, which allows you to switch from active to passive tones when the knob is pulled out. This is a nice touch for fans of passive pick-ups.

How will it sound with some classic crunch, you ask? Yeah, it sounds good, quite full and not quite AC/DC punchy and bright but closer to that classic 90s grunge tone. Let’s be honest, though, this guitar isn’t built for rock. It’s a 7 string multiscale tuned to B, so it’s either going to be belted on the low B for some ridiculously heavy breakdowns, or it’s going to be sweep picked like crazy by some 16yo YouTube virtuoso, which I clearly am not.

So, I throw some high gain through the amp and do the only thing I know how to do on a seven string, or at least pretend to … I play some Korn. And wow, this thing has some serious balls with its super heavy bottom end response and tight attack. Now, all I need to do is to learn how to play a chord when I have that extra string floating around up there.

Maybe Fender Play’s online lessons could teach me a thing or two?

A quick flick through the pick-up position switch just gives the guitar more bottom end flavour as I switch to combined pick-ups and the neck pick-up. At the neck position, the guitar gets its doom on. How low can you go though? Well, I guess that’s all up to you with the 25.5”-27” multiscale neck, Gotoh Locking Tuners and Hipshot 7 Fixed Bridge. I really
don’t see too many limitations with this guitar and any alternative tunings with the variations of tone that it can produce with its 3 pick-up positions as well as its ability to switch those 3 positions back to a passive voice. I could play this guitar for hours and not get bored with it … I just need to learn how to play it properly first.

This is an absolutely stunning instrument, both visually and sonically. Get down to your local dealer and check out one of these bad boys. Maybe even get ‘em to turn the lights off to give you some atmosphere and a chance to check out those Luminlay glow-in-the-dark side dots just like the ones I talked about on its little sister, the DK Modern Evertune 6.

Give one of them a play while you are there too, I’m sure between the pair of them, that at least one of them will raise your action!

I can tell you one thing, it’s sure going to be tough having to give this thing back to the nice people over at Fender Australia.