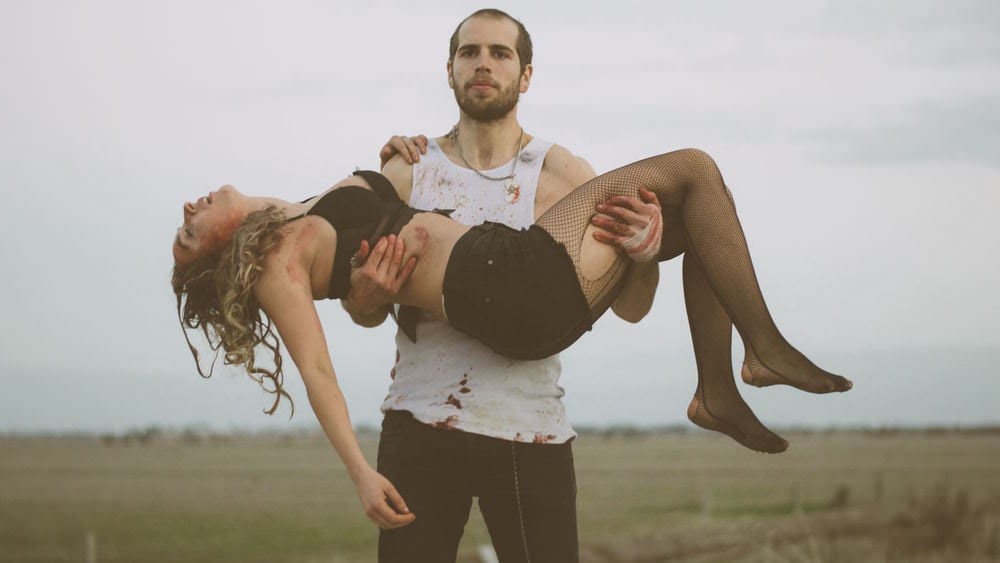 Australia be prepared for one of the best films that this country has ever produced. When you hear a description of the plot behind this crime thriller you could be forgiven for thinking the film will play out like an episode of Underbelly, but there is so much more to this film than that.

Under The Sunset is the kind of movie that you will be talking about months, even years, after the final credits role – not just because of the brilliant acting and fascinating storyline but because directors Tristan Barr and Michael Gosden have created a film that involved multiple locations and stunts but is shot entirely in one-take. Even the idea of doing that sounds crazy but somehow these talented directors have managed to pull it off so well that if this film doesn’t feature in the AACTA or even Oscar nominations this year then something is very wrong with the voting processes.

Heavy Mag sat down with Michael Gosden and also one of the stars of the film Chelsea Zeller to find out just how this spectacular feat was produced.

Gosden beings the interview by explaining the plot of the film. “It’s about a bikie, played by Tristan Barr who is the other director, and we meet him as he is entering the town. He is on the run after dramatically escaping from this bikie gang and he is trying to get to his estranged family, which is played by Chelsea and a young girl called Annabelle Williamson and he is trying to get to them before the bikies catch up and of course like most good times they eventually do and that is where the rollercoaster really begins. My character is the biggest mongrel out of the whole thing, he is a bit of a loose cannon and is the second-in-charge from the main bad guy (played by Aaron Walton). So he does the bidding of the leader of the gang. The main theme of this film is the strong effect that the drug ice has in Country Australia at the moment and my character has a tinge of that, so he has that unpredictable energy and veracity, he is the one that will get it down when nobody else will. It was fun to play.”

“As for Sally she’s come from a very rough background,” adds Zeller. “She is now trying to start this new life in this country town with her young daughter. She is a young single mother, she’s estranged from the father of her daughter but she still has a strong connection to him so that past is just continuing to follow her wherever she goes and she is getting caught in this cycle of abuse and love… so yeah it is quite painful.”

“Originally it started with Tristan as the brainchild,” explains Gosden. “He had the idea of it being a one-shot prospect and he approached me to be the co-director and writer to try and extrapolate this. Then Chelsea came on board probably about two weeks after we had started the ground work for what we wanted to do and it just kind of ran from there. We utilised our theatre training to work out exactly how we were going to sustain the acting and also the momentum of how it would go and it kind of just snowballed from there.”

Michael says that the theatre training that they had all been through proved to be very beneficial for the one-take nature of Watch The Sunset. “Well we all studied at the Victoria College Of The Arts and we were all in the same year there,” he says. “We’ve pretty much been doing it for fifty hours a week for three years so by being able to go to the town, and we shot in a town called Kerang which is up in the north-west of Victoria, and that was kind of incredible because the whole town opened up their arms to us and allowed us to be able to pretty much fulfil what our idea was. We were going across nine locations so the entire town pretty much became our stage in a way where we could pretty much just keep going and just keep progressing through that. So, for the rehearsals we used the theatre training and just allowed ourselves to walk through this town and go with the pace of it.”

When I ask how you go about planning a one-shot movie when it involves stunts and an entire town Zeller is quick to add that it took a lot of planning. “It took months and months of preparation,” she says. “So we would head up to Kerang, I think we headed up three times before we shot, to rehearse in the sequence that we ended up shooting in. We kind of just ran the sequence we shot in over and over and the week that we were shooting we actually shot it all four times over one week and I believe we ended up going with the fourth days take. It was hard to know when you were inside it, it was just like when you’re on you’re on, but it was really thrilling in the sense that you know that there were people waiting on you. There were little scenes that had to happen at certain times so when it was on it was on. As soon as that person would walk through that room it would just rollercoaster from there. There was also a lot of preparation outside of the actors just rehearsing as well, obviously Damien and Jessie with the camera had a lot of work to do, to choreograph essentially. There were a lot of shots for them, but yeah it was really awesome.”

That of course leads me to asking just how difficult it was to shoot the stunts all in one take. “I think the rehearsal and the lead-up to it was probably the most important thing for that,” says Gosden after thinking for a moment. “For instance there is one where Tristan gets out of the car and the camera follows and it was probably about a week or two until we realised that, actually it was Damien the DOP that realised, that there was more that could be achieved if the camera was on the outside of that. So that was not a cog in the wheel but we had been rehearsing for weeks like Chelsea said and then something better came up. I think they were actually the more difficult moments to try and implement, but everybody was just on the same page.”

For Chelsea though the hardest parts were when she had to drive through Kerang while the camera were rolling and then had to wait for traffic. “Those moments were the most interesting,” she says laughing. “They had to be filled with tension and dialogue. Of course the tension was already there, but there wasn’t much room to move around some of that dialogue there. There would be a short time frame that we had to get from Place A to Place B but sometimes there would unforeseen circumstances, like waiting for traffic, so you just had to keep alive in the scene but without over thinking what was going to come next… so it was a real test but very exciting.”

The most surprising thing that comes out in the interview is that while some town members of Kerang knew that the film was being shot… others did not. “We were lucky that some of Damian’s family were originally from Kerang so we had between sixty and ninety extras that could help us on any given day – they knew what was going on. But as Chelsea said we did have to get ourselves from one location to the other by driving through the town so there were a lot of  background artists that could be in this film that don’t necessarily know that they are. But when we hit our locations, like when we were inside a house or inside a church, everybody one we were in that scene or on that property or environment knew they were involved. But yeah there a lot of people that just opened up their arms and allowed us to pretty much do what we wanted. There was a lot of trust from that town. Some that didn’t know I think figured it out on the third or fourth day.”

Watch The Sunset will premiere at the Revelation Perth International Film Festival and some of the cast and crew will be available for Q&A sessions at the Festival.