The Bronx is back. With the release of their fifth album The Bronx V, the first in four years, vocalist Matt Caughtran can’t quite believe it’s been so long. “Oh man, it always freaks me out when you realise how long it’s been. Time flies so fast nowadays; it’s insane.”

It’s not like the pivotal punk-rockers haven’t been busy since 2013. They’ve been writing, working and touring and keeping busy, though that time hasn’t been without its ups and downs. “The last couple of years with the band have been super stressful, to be honest with you. We had to go through a lot of different changes and focus on what we wanted to do – it took a long road to get here, and now it’s [the new album] coming out and we’re so stoked.

“We always work hard and tour pretty much non-stop but there’s something pretty special about this record, we’ve worked hard to get here. The last four years have been great but also incredibly frustrating at times and extremely trying.”

Trying as this time may have been, Caughtran sounds blissfully happy. “I am!” he agrees, “I love the record, a rebirth is a good thing! I feel revitalised for the next decade after this record; we’re ready to go! We have a new lease on life; everything is feeling good right now.”

Indeed, there are tracks on the new album that will stand the test of time, insertions into the archives of punk-rock staples if you will. The Bronx V is still The Bronx that fans have always known, and yet it’s a culminated album of maturity and aggression, and of pain and uncertainty. Happy as he is now, it’s clear on the album that Caughtran has taken no prisoners as he sings his story. “To be quite honest, I was a little-pissed off – it’s an angry record, it’s a mean record, but it’s a smart record – there’s a lot of aggression, but personally, I didn’t want to get too personal on this record. I wanted to try to write about other things.

“Certain songs on the record deal with me coming out of a three-year depression funk that was something I had to deal with, but I’m a better person because of it. Then you have songs about just how fucked up things are in the States right now, nothing gets done to improve the state of everyone’s well-being, then you have songs about just being fucking pissed. Then you’ve got songs about fucking World War Three and shit like that – it’s all over the place, but it’s one of my favourite records we’ve ever done.”

It might seem like The Bronx have something to prove to themselves with the new album, but that’s a stance whose interpretation Caughtran contests and varies. “Having something to prove to yourself doesn’t mean you’re not satisfied with what you’ve done so far,” he says. “It just means that, like, you know there’s more to come, and it’s like, I feel like this album opened up a whole new kind of life for us, you know?

“It was a long road, but now it feels like the possibilities are limitless. In that respect, I always want to have a lot to prove. So for us, it’s always about living in that spot and being proud of what you’re doing, always trying to push forward, always trying to get better.”

Listening to Caughtran’s self-reflection, it seems like it’s not so much a question of The Bronx are having to prove something to themselves, more they are saying they have so much more to experience, and indeed, they do. The Bronx is psyched for the release of the new album and is looking forward to touring a whole host of countries in support of the release. Ultimately, when Caughtran pulls back the curtain, it’s all about looking forward to new experiences. “One hundred percent,” Caughtran agrees. “Life, in general, is crazy, but at the end, all that stuff is a microcosm – you can have super high highs, you can have super low lows, but you press on and navigate through it. For us, to be able to keep this going is a testament to all our hard work.

“It’s the most rewarding thing; I never want to this to stop. I always want to be able to create and learn and write and tour and play, and just be able to affect people positively, and have the outlet for everything that drives me crazy and weighs me down as an individual.

“The feeling of getting that record out, there’s nothing like it, it feels so fucking good. It’s almost like when you do drugs for the first time, the first time you experience that high, you wanna do it again. I mean, we’re ready to write another record, you know what I mean?”

Let’s be clear. Music is the drug here, kids. All these positive feelings and how the new music makes Caughtran feel will culminate when The Bronx tour Australia with Pennywise in October. “Oh yeah, those shows are gonna be complete chaos!” laughs Caughtran. “We’re at a point now in the band where we just wanna have some fun – it’s like, we’ve been having fun for 15 years, but this time, it’s a little bit different. We’re a little bit more relaxed, as far as what we do and who we work with and how we approach the integrity of the band, but it’s also about wanting to go out and have some fun, play some shows.

As an afterthought to this zealous statement, revealing a pensive and experienced man, Caughtran adds, “I gotta be honest with you, life as a fucking musician is complete insanity: it’s great, it’s beautiful, it’s creative, it’s amazing and hard work – everything you’d expect and more. But I think now more than ever; it’s just the time to not to detach from things but to enjoy your life. It’s so easy to get bogged down and get too attached to this stuff.

“You have the weight of the world on your back, and before you know it, you’re fucking dead. You have to take time to enjoy shit, and that is something I will always try to achieve with music, art, conversation; to let people know there’s good stuff out there as well. By all means, come to The Bronx show; let’s get crazy and celebrate. You have to take time to do that in life, or you’ll be fucking miserable.” 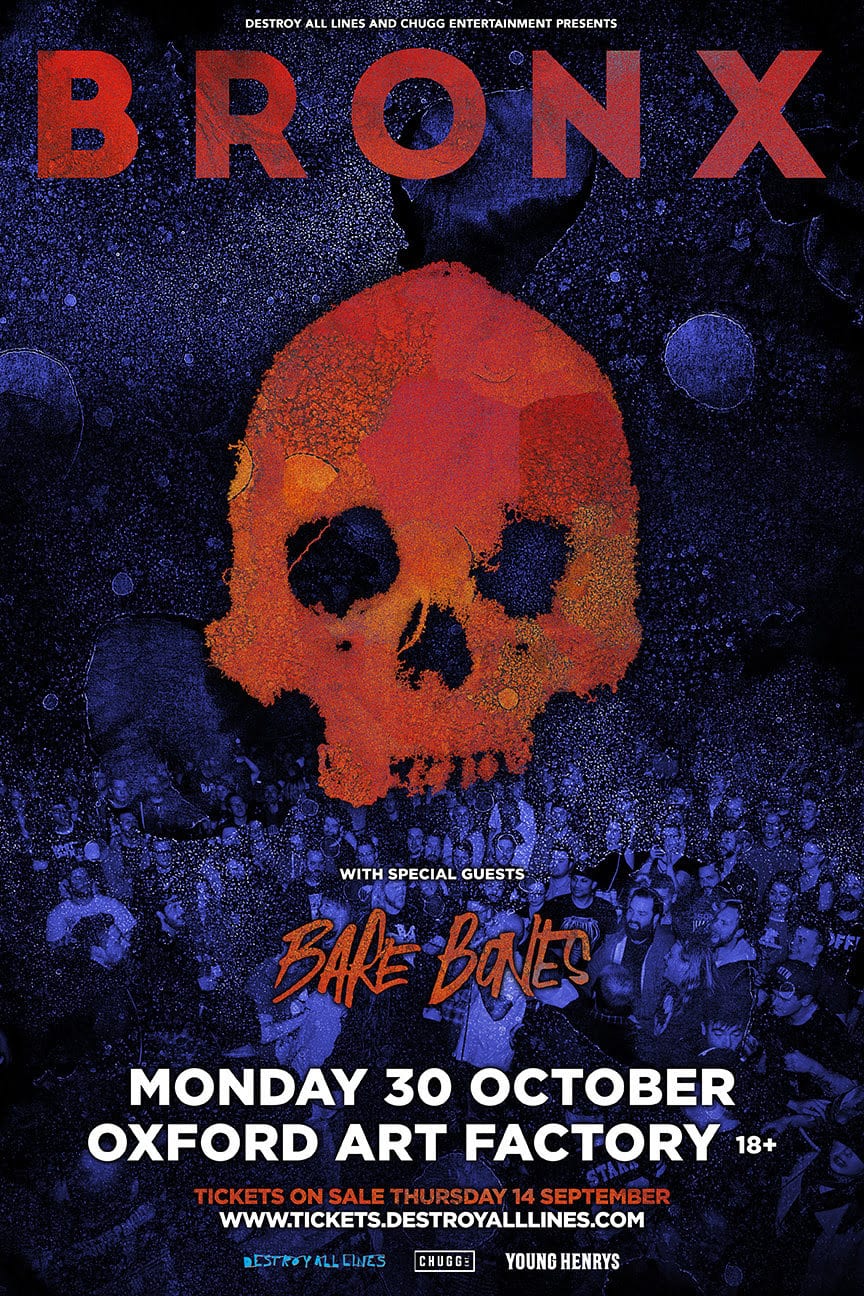