Iconic hardcore punkers SICK OF IT ALL are on their way from New York to Australia! This visit is a finale to their touring the world for their 30-year anniversary, and to be part of a mega line-up to support the legends REFUSED, sandwiched by Melbourne’s HIGH TENSION.

I spoke with singer Lou Koller about the Australian tour, longevity, energy and heads in a bag! That’s right – head in a bag but more about that later.

I’ve been a fan of SICK OF IT ALL for most of their 30-year. They’ve released over eleven albums, and just released a killer four-track EP (10 inch on vinyl with a book) to celebrate the milestone. The energy they expel in their tunes and onstage is relentless seems endless, and would shame many ways younger bands. I asked where do they get all this energy?!

Lou Laughs “We just keep going! And don’t stop. Sometimes we take a little time off but then we get bored. Keeping moving keeps us energised and young. And always a little attitude.” He discussed the city and bands they modelled themselves on. “Where, we grew up in New York City where there’s all this energy and amazing, not just hardcore but punk bands, and rock n roll bands, and they all had great reputations of being great live acts… like you said, AGNOSTIC FRONT, CRO-MAGS and MURPHY’S LAW. When I was young, those were the three bands of New York and when you went to see them live they were just a ball of energy! And that’s where we learned how to play, watching them.”

Brothers Pete (guitarist) and Lou Koller have been in the band since its 1986 start, Armand Majidi (drummer) and Craig Setari (bass) joined in 1994. The secret to their endurance is a mix of tension, insanity, and compromise. Lou explained. “A lot of great bands made great music because of the tension and insanity (between members), as the BAD BRAINS. …(In) rock ‘n roll look at the Black Crowes – the two brothers hated each other, but they made great music. With us, though, you don’t let your ego get out of control. You might think you’re right and the other guy thinks he’s right, but we have to come to a compromise sooner or later or else it’s done. That and we constantly make fun of each other, so you’re never offended about anything.”

Taking the piss out of each other – we’re great fans of that over here, I told him.

We discussed the tour, and he said SICK OF IT ALL would be giving 150% in their shows! “I never knew who HIGH TENSION was and looked them up online, ” said Lou, “and I was like ‘Wow! They’re pretty heavy and intense!!’ and that’s gonna make us want to… not that we’d come with anything less than 100% but when you’ve got a band that’s that young and energetic you wanna lik to prove to… We’re sandwiched between these guys and REFUSED, who are a great live band, we’ve got be at our… be beyond our best! We’re gonna be giving our 150 percent (laughs)!”

I asked if they have any downtime this tour in Australia? And having been here several times, likely cuddled enough koalas, what will the guys be up to?

“Hanging out, talking to people, we know spots we like going to, or see friends, we have a lot there now, who’ll want to take us out. We’ve made friends with a band called the Crowned Kings. They’ve promised to show us, Melbourne, like we’ve never seen before so we’ll see.”

I asked how they met and toured with Aussies CROWNED KINGS. “Yeah, it’s funny… they played with us in Melbourne and my brother Pete liked them …” He asked them to open as support on their tour in Europe since they both planned to be there at the same time. “ They supported SICK OF IT ALL again on the part of their European 30th Anniversary tour with other friends WISDOM IN CHAINS.

I asked how long is left in the band –  what did he see is the future of the band?

Lou responded “It’s the same as its always been, we just sit there and if we’re inspired to write good music, and we’re still having fun then we’re gonna keep going. When it starts to suck, we’re probably gonna stop” He shared that it’s a bit harder now as they all live in different states, and most have families now, but when they are back together, it’s like they were when the band began. “When we go on tour it’s like we’re 16 again! The second we are in the same room, the same plane, the jokes are flying – that’s beautiful! I still love that about the band.”

I asked about 2017 for SOIA because I didn’t see any dates for their Australian tour on their website, and asked what they had planned. I asked if time off was booked? I think they deserve it.

“(Laughing) We’re going to figure it out. In 2017 we’re trying to stay off the road, and write a little bit. And we’re also going to tour the States (USA) for like two months. Which we haven’t done in a long time! So hopefully that works out.“

“Thanks to everyone, even if they’ve not been with us for the full thirty years, for coming and joining in on the ride and like keeping us going and that’s another reason we are still going is people still want us to be around!”

To close, I asked of a Spinal Tap moment that he could share and was told of “not Spinal Tap – but the weirdest and scariest story that happened to SICK OF IT ALL. “We were in Pennsylvania (USA) and as we were loading out these kids came running around the side yelling ‘there’s a homeless guy out there who’s got a gun in his belt yelling he’s got a head in the bag and he ‘killed the bitch’. We thought ‘yeah he’s just crazy he’s probably got nothing.’ All of a sudden, the guy comes around the back to where we are. We’re all about to get in the van, and he starts screaming all that stuff, so me Pete and Armand (drummer) walk over and say ‘What’s the matter, mate?’ And he’s like ‘I killed her!’ He opens the bag, and there was a head in-the-bag! We jumped in the van, and he starts going for his waist! We’re like ‘Go, go!’ As we’re tearing out of the carpark, about 25 cop cars tear in! We thought ‘he’s just a crazy homeless guy, he doesn’t have a head in the bag’, and then ‘oh my god, he’s got a head in the bag!’” Wow!!

Go and see them if you can, and if you’ve not seen SICK OF IT ALL before, witness the sheer awesomeness of these still vital hardcore legends!

“SICK OF IT ALL Tour Dates”

SICK OF IT ALL “Road Less Travelled” 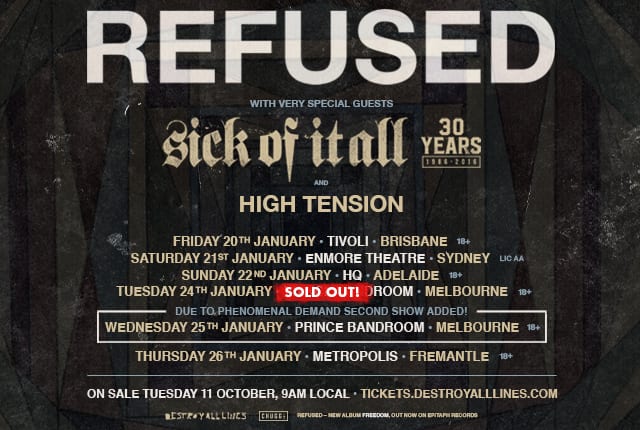 High TensionRefusedSick Of It All

Derek J. Huckel is an amalgam of live gigs and concerts since about 1989. Hard-Ons, Hellmen, Mass Appeal were the bill of a first show he attended and it all changed from there really. Joan Jett and the Blackhearts, Sex Pistols and Chipmunk Punk were early childhood faves. Mix that with these Sydney bands mentioned, and a steady diet of the Trade Union Club, Evil Star, Hopetoun Hotels and the St James Tavern who served a feast of other audio morsels ranging from those above, King Snake Roost, Roddy Radaj, and the Southern Fried Kidneys. Space Juniors and the Falling Joys. An eclectic mix of aural pleasures became his delectation. The 90's saw an addition of hardcore like Toe to Toe, and the like. London called for several years, a second home, and tastes thus broadened to include world music, and blues, also electronica, as new influences... It hasn't stopped.