Pustulus Maximus of GWAR and the ‘The Blood of Gods’ 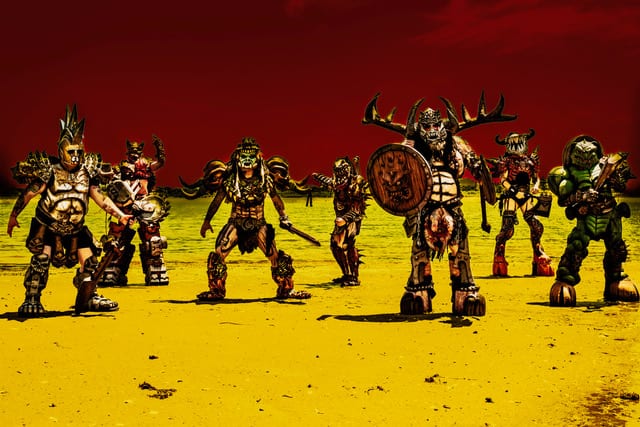 “The last time someone tried to put on their own GWAR show was in Jonestown, and that didn’t turn out well for anybody.”

Off the back of their latest album – The Blood of Gods, GWAR guitarist Pustulus Maximus caught up with Heavy Mag and spoke about the process of making a new album without Oderus Urungus, their experience with Warped Tour and the APMA’s, as well as shedding some insight on how to transport barrels of blood and semen across the country. Regarding a tour? It is very likely the band will be hitting our shores (and killing some people) in 2018. “There’s an offer on the table, and we’re going through the inner workings of it right now.”

GWAR’s recently released album has Pustulus hailing it as one of the best records in their career. Despite the pressure of releasing the first record since the passing of lead singer (and final active founding member) Oderus Urungus, Pustulus doesn’t care about the reaction from fans towards the album. “I don’t care if you like it or hate it because the record is important to me and I’m my own worst critic, so if I can make myself happy that’s a feat

“It’s different, and it’s something that came naturally. We have forced a lot of records out before, we have made a lot of records, and this is the one I am most proud of in my career. I’m just happy that we got to do what we wanted to do, take time to construct the songs to have melody and sound good. I think we did it justice, we did a GWAR record without Oderus, and that was no easy feat. There was a lot of apprehension about doing it. The main thing was to write what came naturally and wrote songs that only GWAR could write.”

“The biggest pressure was that we didn’t want to sound like a cheap imitation of ourselves. It’s kind of like when you have to replace a frontman of such notoriety and such infamy you can’t create a carbon copy of that. Anything else is going to fall short and be awful. We had to do the record that we could as the band that we are now, and I think we did that. We utilised Blothar‘s voice; we brought back some of the other characters on vocals. I got to sing on Crushed by the Cross. We were able to touch on that eclectic sound that GWAR had back in the day.”

The decision to continue touring without Urungus, and to create another record, came with pushback from some fans and critics, who believed that GWAR shouldn’t continue without Urungus’ presence. When asked about his reaction to that, Pustulus was – in true GWAR fashion – blunt.

“Well, they can fuck right off for one. It is insulting in a way when you hear all that kind of shit. It’s not even that I fucking give a shit, but the gall of people to even think they can tell GWAR what to do. But the biggest part is how do you fucking tell someone that you need to stop doing what you’ve done for your entire life? You need to stop doing something that you’ve worked on for thirty years because someone else didn’t care enough to stick around and make it happen with us? None of us wanted to lose Oderus, but there were some drugged out groupies here literally within the first few days [of Urungus’ passing] telling us that we should break the band up. Its like, I got habits to support man, I can’t stop working, I have to. This is what I do. I create, I maim, and I murder, and I’m not going to stop for anyone.”

When choosing victims, GWAR’s criteria is pretty simple: “With people like Donald Trump, it doesn’t take a surgeon to know that that’s who we want to dispose of. Typically, anyone who wants to try to take the spotlight away from us, we make sure that they die as well.”

When pressed about Australian victims for future tours – and upon finding out that Tony Abbott is no longer Australia’s Prime Minister – Pustulus’ attention turned to Andrew Bolt, who called GWAR’s decapitation of Abbott in 2014 “horrific abuse” and “not a joke.”

“We were always looking for that person! We never knew where that came from, but we liked the publicity, so we need to thank him before we chop his dick off. When we get word that we are coming back, you guys need to tell us who you want us to kill.”

Crowds for their next shows can “expect to be wowed. There’s no other show on earth like what we put on, and anything else is just a poor imitation.”

“I mean, I’m doing it right now. I can squeeze it at any time, no pun intended. You gotta find something in life that you enjoy, and that you’re good at, and quite frankly, I enjoy and am very good at pleasuring myself so why would I stop for anything or anyone?”

A GWAR show is a big production. There is a lot of blood and bodily fluids that need to be trucked around. Elephant semen (“ideally straight from a tap”) being Pustulus’ favourite. For those worried about border control – or fancy running some blood across US state lines themselves – Pustulus’ advice is simple: “Usually what you do is you leave a bag of oranges in the front seat so when they confiscate your oranges they say ‘Oh that’s all I had!’ We usually cross out semen on the barrels and write y’know, wheatgrass, or silica gel. Lie, we just lie.”

And in the worst case? “Sometimes you’ve got to swallow all of it and just hold it in your body until you get across the border.”

We were also given some insight into GWAR’s experience on the recent Vans Warped Tour, as well as Pustulus’ feelings about the APMA’s they attended.

“The exposing [ourselves to a younger crowd] part was the best. If you can expose yourself to people younger than you, then you’re helping people come of age. It was great, nobody would believe them, we told them not to tell their parents, and hopefully, they’ll [Warped Tour] ask us back. I probably won’t do it again though. Because its called the Vans Warped Tour but they didn’t give me a van. I thought it was free vans involved.

“I’d murder half [of the bands on the Warped Tour line up]. There was some fucking contrived bullshit on that tour. There was also a lot of cool shit, a lot of bands I didn’t like before that I walked away from actually enjoying. But for the most part, there’s a lot of artists out there obsessed with some fucking weird backwards Hollywood/LA image. Everyone out there wants to look like Nikki Sixx, and I think that’s weak.

“[The APMA’s is] the epitome of a self-congratulatory event. I don’t have anything in common with those people period. I don’t like the style of music, I don’t like the worthless accolades bestowed on them for their meagre achievements, and I hope I don’t have to take part in another one. I’m not into music for popularity or money, and I feel like that’s all any those people want. It’s just a bunch of fucking rats clawing all over each other to get to the top, but if you get to the top, you’re still just a rat on top of a pile of rats. It’s meaningless.”

You can read more about it here: https://getinvolved.dkms.org/fundraiser/1163832