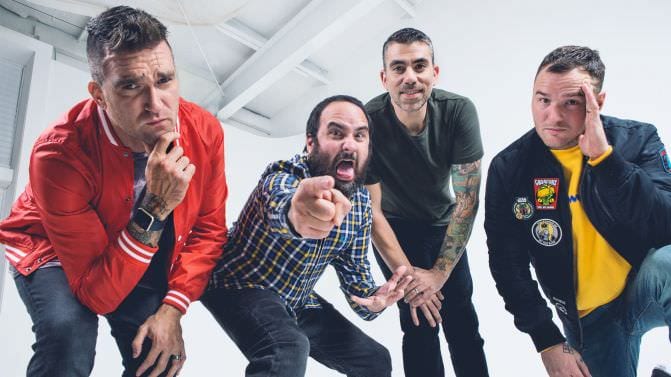 “We knew that the twenty years was coming up and it’s kind of a weird time because we had a new record coming out at the same time, so we were like, ‘Shit, what are we going to do?'” laughed Jordan Pundik, vocalist for New Found Glory. “We really wanted to do something special for the twenty years but there was the new record too, so we decided, ‘screw it’. It would be awesome fun to just re-learn all these old records and play them for everybody. That idea turned into reality, and it’s been awesome. The shows have been insane, and to be doing this for so long and still play shows… and the people coming out to these shows have been insane too. It’s a really cool thing, and when we’re playing certain records, it feels like I’m in 2005. We play Coming Home, and I feel like I’m in 2007. It’s surreal. It’s not like all these nostalgic thoughts come to mind when I’m on stage, like when I’m singing a song, it’s not reminding me of sleeping in my parent’s house still (laughs). That doesn’t come into my mind until later on when I’m talking about it afterwards, but when I’m on stage, I feel like I’m still in that time. It’s a really cool thing.”

Not only will they be playing some of their older albums on tour, but New Found Glory will also be changing it up every night – playing a select two albums out of their first six, with all of the options from albums that were released prior to 2010.

“I think we just wanted to play the most important records for a lot of people,” Pundik confirmed. “We have our ear to the ground, and I know for me, I like talking to people and meeting people. I like going out and trying new places and talking to and meeting whoever is around. Even when we do our meet and greets – we do them every night before the show and sign stuff and meet people – even before the twenty-year tour and people were always like, ‘Are you guys gonna do something special for the twenty year anniversary, like play your old records?’ and we decided to go with the ones we think are the most important to people and the most important for us. Those first few records are what made us who we are now, and there were so many ups and downs, and there was a lot going on in our personal lives and band world back then, so that was the biggest reason.”

Six albums in their entirety are a significant amount of songs to learn on demand and Pundik admits that the task is a little more daunting than he anticipated.

“Yeah, it is,” he laughed. “Dude, let me tell you, I have a hard time remembering songs that we do every night so having to re-remember all the later songs – the deeper tracks on the albums that we never play live – is hard! I kind of made it a point before the tour started to every night listen to one of the records. So for the first two nights, I would listen to Nothing Gold Can Stay for two nights. I listened to it before bed all the way through. For the next few nights, I would listen to the self-titled album and so on and so on, and once I was done. I started at the beginning again up until the time I left for the tour. So doing that really helped, but you know what? My brain is so fucken stupid that I still forgot lyrics and fucked up (laughs). Hopefully by the time I get to Australia, and because I just did it for nine weeks, I will be fine. I will do a little refresher on the air plane, but I think I will be right (laughs).”

Not only does the music of that era hold fond memories for fans, but Pundik argues that playing these tunes is also emotional for the band themselves, taking them back to a time and place they have long since moved on from.

“It’s super exciting!” he enthused. “Those were pivotal moments in the lifespan of the band. It got us to where we are now and made us who we are. It’s really cool to play Coming Home. In the grand scheme of things, that wasn’t our biggest record, but to me, it’s one of my favourite records that we’ve ever done. And playing these last shows, it’s surprising because that’s a lot of people’s favourite record and it’s been really cool to see that and play the songs and have people singing along, even to tracks ten and eleven. The fact that people still love these records that I didn’t think were that much of success is really cool.”

Pundik was still in High School when he started New Found Glory, and as such, says that the early days of the band weren’t so much about making it so much as simply having something out and having a good time.”

“Oh man, I’m just speaking for myself, and Ian probably has a whole different answer than I do,” he teased, “but Ian just wanted to be in a hair metal band and play arena’s with spandex on when we first met (laughs,  but for me… I dunno, man… it’s just weird to look back and be in a band for this long. A lot of our peers, and a lot of bands that have been around for as long as we have, either no-one really cares about anymore, or they have broken up or something, so I just find the whole thing pretty unreal.”

Such was their youth in the beginning. The first E.P. released by New Found Glory was titled All About the Girls – a freshening indictment on the priorities of the future pop-punk grandfathers. In the ensuing years, Pundik admits that not much has changed.”

“Um… no,” he laughed. “Up until recently, yeah, but shit, man, we put that out… I think I was sixteen at the time so I do remember when we finally got the copies. I had a couple of boxes of twenty in my house, and my mum would take them to the office and say: ‘My sons in a band, buy this’. It was pretty funny.”

Since then, as happens, New Found Glory have made changes musically, although their content matter is still based in the headspace from those high school days.

“I think we know who we are as a band now, where, when we first started out, we were still trying to find our voice and figure shit out and figure out how to be living on the road and figuring out each other,” Pundik mused. “And now, it’s kind of like we know all of that shit, and it’s almost an organic progression where we have this way we write songs, and we have this way we communicate with each other, and it just all has worked. And so… it took a long time to figure out, and we’ve always tried to make the best records we can make and do what we know how to do at the time, but now we’ve been a band for twenty years, and there’s a lot more at stake in our lives. There’s a lot that has happened over the years. Especially with the way the music industry goes, and the way records are made and all that B.S. stuff. Now, we just do what we wanna do and if people like it great and if not that’s fine too.”

With age comes responsibility or something like that, but Pundik shrugs off the notion that he and his fellow band mates feel an obligation to grow up musically.”

“Not in a sense where it’s like, ‘Okay, now we’re in our thirties we have to grow up now,'” he laughed. “We’re a band who has always been about the human experience and things that have been real in our lives, so we’ll always stand by that. We’ll always be that band. We’ll always be a band where people can just put on our record and have a good time and reflect on their own lives. To think about the time they had when they dated that one person in high school or the time that they lost somebody and put on our record and it really made a difference for them. We’ll always be that band, and I don’t think… there’s a lot of times where people think that maturity is having weird sounds on the record and slowing down and stuff, but for us, it’s always been about putting out the best record we can make if that makes sense.”

New Found Glory have been labelled the Godfathers of pop-punk, which is not such a compliment when you consider none of the band has hit forty years of age yet.

“It’s definitely flattering,” Pundik laughed. “I’ll always stand by that. It’s a flattering thing to see bands come up and do well and their band is named after one of our songs, and for us too… I love finding out about new bands and taking out cool new bands and finding out about stuff. I’ve always got my ear to the ground, but it’s definitely weird when people call us that (laughs). Mainly because I never set out to do that, you know? When we first started, there was nothing really in the style that we were playing – especially growing up in South Florida, there wasn’t really anything going on, and all of us were into hardcore and a lot of Revolution Records and stuff like that. So we just took something that we knew and put it into something that was fun for us. Then it became this sound where you mix chugging guitars that were kind of influenced by New York hardcore, but then we also loved the West Coast pop-punk bands like Lagwagon. We never dreamed we would be in this position we are today.”

After twenty years in the industry, it would be easy to begin to feel jaded, but Pundik argues that every time things start to get too much, it’s not easy to refocus on the things that are important.

“I think just being appreciative of where we are, and being on this last tour and seeing the excitement in people and meeting people keeps things real,” he offered. “Hearing people say, ‘Man, I grew up with you guys. This is my little brother, and he just got into you and bought your new record, and he loves you guys’. Knowing that’s still happening and it’s being passed down… It’s pretty special. It’s interesting seeing a New Found Glory show because you have people from all walks of life, but then it’s like, you have… you expect to see just older people in the crowd but it’s not. You look at the front row, and it’s all young kids. And then you get the older people at the back drinking beer and waiting for “My Friend’s Over You” to come on, so it’s a really cool thing to see. I think it all comes down to being appreciative and remembering where we come from and keeping a level head.”

New Found Glory are on tour in Australia this August for the ’20 Years of Pop-Punk’ tour. Presented by Live Nation.

THE METRO THEATRE, SYDNEY – FRIDAY AUGUST 11**
Catalyst / Not Without a Fight

THE CORNER HOTEL, MELBOURNE – TUESDAY AUGUST 15* SOLD OUT
Catalyst / Not Without A Fight