“For starters, we know how to play our instruments now,” laughed Luca Brasi‘s guitarist Thomas Busby when asked how they are different now musically to when they released their debut album, Extended Family in 2011. “When we started, we didn’t know shit from shine. I didn’t even own a guitar tuner! It was humble beginnings for sure, but at the start, it was just about paying homage to the music that we loved listening to a lot as a group of friends throughout that summer. All through the back end of 2008 to 2009, the band started working on things but towards the end of 2009, we kind of got stuck into it properly leading into 2010. We were into all that Australian punk thing that was getting around, like The Gift Horse, Paper Arms and The Scandal – all that stuff – and it was just about having some fun and just paying tribute to our favourite bands. And then after a while, I guess trying to carve our own path, really: just try and do our own thing and work out what that is. I think that was our second album, really trying to work out what we could do that would just be us.

“With the stuff we’re working on now, it’s sort of… not really worrying what other people will think or what fits into the genre – the loose term I’m using is ‘punk rock’. A lot of people roll their eyes when we say we’re a punk rock band, but that’s okay; it doesn’t matter. Now we’re just trying to work out what’s our sound? We had times in the past when it was like; I don’t know: that’s a bit weird, that’s a bit fruity, or we’d say things like this guitar part sound like Luca Brasi or this bit is a short, fast punk solo. It’s typical Luca Brasi, but we realised maybe six months ago, hang on, WE get to decide what Luca Brasi sounds like, we ARE Luca Brasi – it’s so weird. At the moment, we’re having heaps of fun, we’re using all these weird tones and different effects but still keeping it the same. It started out as paying tribute to our favourite bands to now just trying to carve our path and work out what that is which is exciting in its own. It’s our own little adventure, really.”

Luca Brasi is about to embark on their biggest headlining Australian tour yet, playing at venues that are much bigger than they are used to, and in the process, finally getting to do things their way.

“We’re pretty fired up,” Busby enthused of the tour. “We’ve had a few good jams the last couple of weeks, and the last few days it’s really started to sink in. Some of those venues are massive! We’ve had a bit of a break but we’re keen to get back out there.” 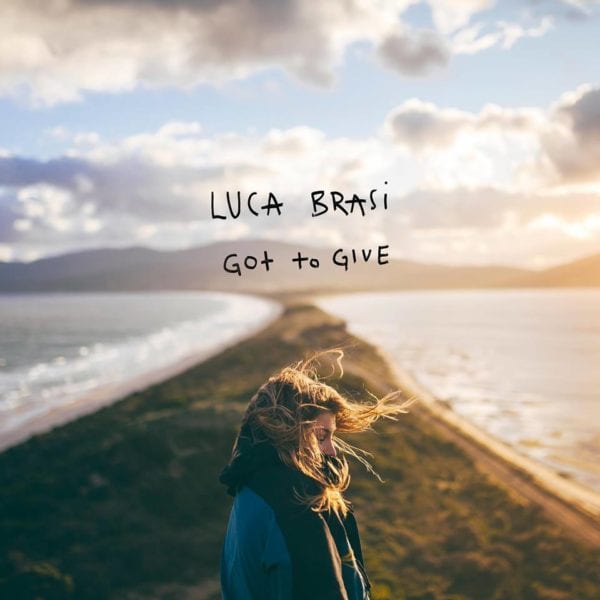 Through recent supporting tours both here and overseas, Busby says he feels the band are in the prime of their career and will certainly be putting into effect lessons learnt from their European tour supporting Moose Blood last year.

“I think that tour made us a heap’s better band,” he stated matter of factly, “because we were playing 29 shows in 30 something days, so it was the most consistent tour we have done day in, day out.  We’ve been touring together for a lot of years now and have known each other for a lot of years as well. For me, I’ve got to learn just to be quiet a little bit if someone’s having a crappy day or they’ve got a headache or maybe they don’t wanna listen to me make bad jokes all day (laughs). As far as playing goes you just get so much more locked in together. Little things, little details about the way you play a certain song or part or do certain segues you just get to tidy it up every night. If you have a particularly loose night or something doesn’t go quite right, the good thing is we’ve got another 22 shows in 24 days coming up, so you get plenty of practice (laughs). When we got back I think two weeks later, we did the Violent Soho tour, and I was really stoked at how well we were playing on that tour, and that’s purely because we were in Europe for a month playing gigs day in, day out; which you don’t really do here. On this next tour, we leave Thursday, get back Monday morning, and then start Wednesday again and get back Sunday, and that’s the tour.”Last year was Luca Brasi’s most successful twelve months as a band, gaining chart success and ARIA success as well as having the hugely successful album

Last year was Luca Brasi’s most successful twelve months as a band, gaining chart success and ARIA success, as well as having the hugely successful album If This Is All We’re Going To Be. According to Busby, that was a touch of luck, but more a culmination of the work put in over the last few years.

“I think last year we made our best record to date by a long shot,” he agreed. “That’s the first thing. We spent more time and more money, and we sort of… I guess we took it a bit more seriously. We took the others seriously but it was fitting in around our lives. On this one, it was still the same – the boys all still had to go to work every day, and I had Uni. But we had an extra week in the studio than we normally would have and the record came out heaps better than the others, and then there was just good timing for certain opportunities. The record came out and was played on the radio which was awesome, then we did a tour with The Smith Street Band which was crazy and such a good opportunity, and then at the back end of the year touring with Violent Soho – that was massive. It was just a bunch of stuff that lined up perfectly, and then obviously, our own headline tour in August, which sold out. Last year was just so good to us.”

It is never a fluke when an album does better than its predecessors, and the fact that If This Is All We’re Going To Be was so much better received by their fans shows that things more than just fell into place.

“I think we tried to play to our strengths a little more,” Busby reflected. “Looking back over the first two albums, enough time has passed so that we can listen to them a little more objectively maybe, and we can say: ‘I think we did this well, but we fell a little flat here’, and learn what songs went down better live than others. Then we could ask: what are we good at? What did we try to do that we didn’t manage to pull off and how can we improve upon that? If you listen to the first few tunes on our last album, it’s just punchy, poppy, upbeat punk stuff in a similar vein to Bodyjar, and that’s what we’re good at. We’re good at playing fast and banging our heads. I think the original mission statement was just: let’s do that ten times. Let’s make an album in a similar theme to where you press play and blast along at the one pace and don’t let up, and then it’s over before you get your head around it. That was the mission statement, but it didn’t really come out like that because we had a few slower jams like “The Cascade Blues” and “Count Me Out” that just sort of happened by accident. But the thing with those tunes is we spent so much more time on them than any of the others. It was like we could go into these different sorts of vibes, but we had to work really hard at them because it’s not really coming out naturally. [With] “Count Me Out”, I don’t think we’ve ever spent so long on the one song and it’s one of our favourites songs. I’m so proud of that one and playing it live is so sick. You’d think that the slow, sad song would be the boring one to play live, but no, it’s got such a sick vibe when we play that. I think just acknowledging what our strengths are, and if we wanted to stretch our wings a little and really pay attention to what’s coming out, and work really hard at it, was a big difference. Whereas in the past it was like, ‘I’ve got a riff, you’ve got some vocals. Here’s a song done, let’s do it’ (laughs)”.

Perhaps one of Luca Brasi’s biggest hits isn’t even one of their own, but rather a cover of Paul Kelly‘s “How to Make Gravy”, which was recorded for Triple J’s Like a Version.

“It’s a great tune for starters,” Busby affirmed as one of the reasons for choosing that particular song. “Paul Kelly is an absolute classic! It was hard coming up with what song we were going to do. We really didn’t know… well, I certainly had no idea (laughs). I think the closest we got was Everclear‘s “Santa Monica”.  We’ve talked about covering that since about 2012, but Pat just came out one day and said, I reckon we should do “How to Make Gravy”, and me and Tyler (Richardson) talked about it and said, how are we going to do that (laughs)? But Pat said we could and just to put my guitar in weird tuning and just play something pretty around the chords, and I was just dicking around at practice, and eventually, I chose that tuning, slapped the capo on and played. We jammed around and winged it a bit until we got something semi-cool, and we were like, ‘Alright, this could work’. It was all Pat Marshall‘s idea. The rest of us were doubting, but there’s something to learn there. Always listen to Pat (laughs). That was another thing. So many bands get absolutely roasted when they do Like A Version – even the ones that don’t deserve it – so we were like, ‘We’re gonna cop it here’. Paul Kelly is a national treasure, we’re setting ourselves up for a bit of a pasting here, but we came out alright. I think one negative comment I saw that cracked me up was ‘I prefer how the original had the fade out’ and I was like, ‘How are we gonna do a fade out at a live recording!’ (laughs).”

Catch Luca Brasi on tour this June/July with Pianos Become the Teeth, Maddy Jane, and Speech Patterns. Presented by The Music and New World Artists.