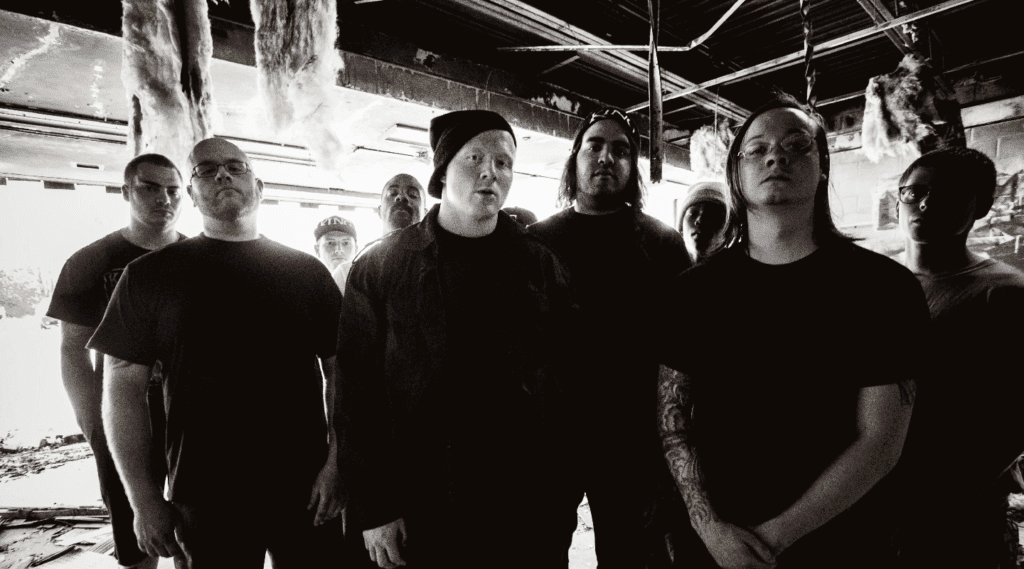 Flint, Michigan – America’s most dangerous city is also home to one of the most dangerous groups in today’s scene. King 810, the quartet responsible for excreting the horrors and trepidation that’s represented in their hometown through their music, have returned with the follow-up to their debut Memoirs of a Murderer entitled La Petite Mort or a Conversation with God.  I had the pleasure of speaking with the band’s menacing poet David Gunn about the process of their sophomoric effort, the environment surrounding them in their city and the effects it’s had on their opaque compositions.

“It was basically, the same as it always is” Gunn says. “We developed the songs as much as we possibly could and we used our own equipment, because we don’t like to waste time, I guess. The first record has two spoken words, about four or five programmed with electronics and moody atmospheric tracks along with six or seven heavy tracks. But with this new one, the difference between La Petite Mort and Memoirs would be how concise, comprehensive and cohesive the piece is. It’s a little less when you’re fragmented, as far as the last disc goes and you’ve got a couple of boosted songs on there with spoken words and songs with heavy distorted guitars. The newer one has all of these things rolled into every song.”

“So, it’s a little more cohesive as far as the piece being as a whole melded together tastefully. But as far as introducing new elements is concerned, I don’t think it’s possible. There’s always a filter there. Anyone who thinks that something is outlandish has got the blinder’s eye. But there’s a lot going on here. Even on the old record, there’s a lot more of it. I think if people read into it, they’ll realise that someone’s own stuff has a quadruple entendre. It doesn’t really get deeper, but I haven’t found a writer that can sum something up in three words.”

In reference to the album’s title La Petite Mort or a ‘Conversation with God’, Gunn states that there’s more than just one simple meaning behind the name of the record. For King 810, there are several different implications behind its moniker that can be translated in many ways to the listener. Even David himself believes there’s something more to it than just the signature of La Petite Mort.

“We have a way of using different words, like memoire is a French word, so it could be developed into something else. You could take the sexual meaning from the phrase of having an orgasm, or you could take the more censored version and put it with ‘a conversation with god’ to reference the physical and sexual communion in reference to having a conversation with god. It could mean hundreds of different things. But basically, it’s the best title to fit the whole album and it fits a lot of different things to us as a band. We don’t ever have one thing that’s going to have one simple meaning that could be easy to judge. It’s got a lot of palpitating themes and layers underneath all of these words.”

With King 810 representing Flint through each and every audible creation of theirs, it has gained them not just new fans, but also a lot of awareness from the metal community and those that have recently been familiarising themselves with the quartet about what the townspeople of Flint have been facing.

“I’m glad that there are people who more aware. I guess that’s a small victory. But, if anything changes or not, I’m glad that people are interested to look into it a little bit more. As far as anything goes, whether it’s Flint or where we’re from, the lyrics and what the words mean and the messages behind it, they inspect it, and that’s a good thing for us.”

Last year, Flint’s water system became contaminated with THMs, lead and coliform bacteria, with the outcome of over 6,000 children being exposed to lead and countless other conundrums. This inkling made King 810 make the move on raising money to donate gallons of clean drinking water to the citizens of Flint, with the proceeds going directly to the Community Foundation of Greater Flint’s Flint Child & Health and Development fund. According to Gunn, nothing has changed in the last handful of months, and that people have been paying less attention to the situation them and the people of Flint have been facing.

“There was a hot topic about it on CNN a year and a half ago when it happened. Now, everyone wants to talk about building a wall between Mexico and the US or some stupid bitch’s email or whatever is referencing politics and things like that. I’m not trying to buzz for it anymore, it’s not a hot topic. I mean, it’s not anything we’re not used to, whether people are doing anything or not, I mean, it’s just where we live.”

With King 810’s ongoing concepts of Flint’s history of violence, crime rate, their own personal life stories, the contaminated water and every other reoccurring theme in their lyrics for La Petite Mort or a Conversation with God, Gunn feels that nothing else needs to be cited in their music, other than the struggles they and everyone in Flint has faced for a long time, which eventually leads to the media conferencing with the world about the highlighted topics King 810 get asked about.

“There doesn’t really need to be anything else. There’s just a funny list aside than it being just a history of violence and everything else, but it’s just home. I mean, people try to get me to synopsize at an elevator pitch with the short one-sentenced clincher that everyone can hang onto and keep spitting out as the buzzword or the punchline of the catchphrase. Its home and its one good example of what people latch onto. But when you say you’ve been shot twice, they can gravitate towards it, so they hang onto it, then propagate and magnify it and blow it out of the water. And they act like you’re the one that went around screaming shit about you getting shot, when I just mention it a few times and I mentioned a lot of other things many times.”

“So, I guess it’s more than the poisonous water or the violence, it’s more about the combination and how every day, it’s consistent and it’s just something that’s attached to our home. You can’t walk a single block without remembering one certain thing from your childhood. It’s not a big town. So, I could drive fifteen minutes around the town and have thousands of different memories from the past.”

As far as King 810’s poetry goes, David Gunn takes the lead role as the band’s raconteur. Executing some of the most chilling and realistic anecdotes in their lyricism, Gunn states that it’s always been an aptitude of his when it boiled down to his penmanship and bio-graphing the nature of King 810. And he will continue to do so for every other album that the group intend to incarnate.

“I kind of always had a knack for storytelling. I have a lot of friends that knew a lot of shitty people and they always used to tell a good tale. We always had some experiences when it came down to telling a story, and I always had a knack for it. So, I was always the one that told the stories or almost kind of kept track of the folklore and the happenings of the group. I’ve had that gift since I was seven years old. So, it’s been a long time of telling stories the way they were.”

ONLY GHOSTS REMAIN Add Light to The Shade

THEREIN To Release “Aramitama” In Time For Halloween