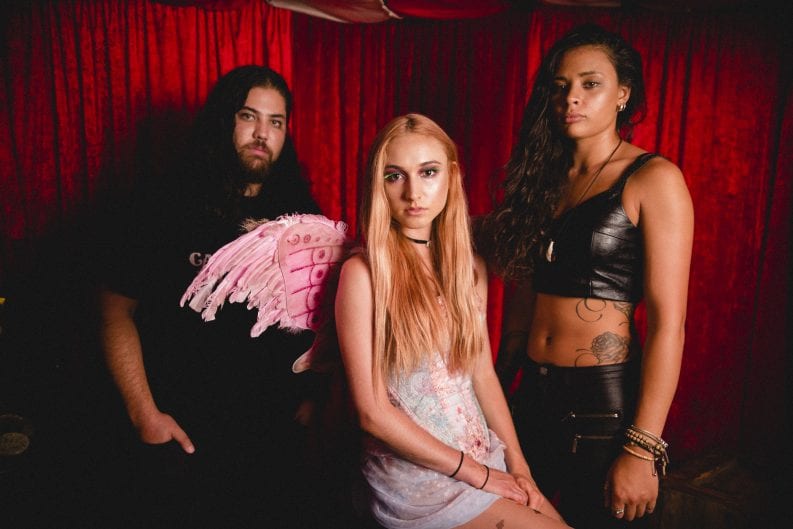 In the past couple of years Australia has produced some brilliant web-series that have captivated the world. Series like Bruce have received accolades both here and abroad. Now comes a brand new series, the supernatural thriller Jade Of Death and it already has international recognition.

Jade Of Death has already won awards at the web-series equivalent to the Academy Awards and tonight it gets its premiere at the Mardi Gras Film Festival in Sydney. We caught up with series writer/director Erin Good and producer Taylor Litton-Strain ahead of the premiere.

Erin tells me that Jade Of Death started while another project was in a stalemate. “It came about when I was wanting to do another project, I was in this terrible time of distribution for a short film,
she explains. “Any director will tell you that that is just a depressing time where you sit around waiting. So I decided that I wanted to do a web-series taking from an old TV series idea. So I approached Taylor about it and then we started developing it further and we started the production independently, so we didn’t have financing in the beginning but then we got financing in post-production . And in terms of how it has won awards already it was nominated by the International Academy of Web Television in L.A. which is like the Academy Awards for web-series.”

Taylor nods and then adds, “Erin and I have been working together for years now and she always knew I was keen to make a web-series so when she approached me with this idea we always knew that it was going to be something strong. So in terms of going for the awards we just wanted to submit it to award ceremonies before we released it so people would know how great it is basically.”

When asked to describe the series Erin says “Yes it is a supernatural thriller and it is a story of Jade and she can hear how and when people are going to die. And she works at this seedy carnival as the Fortune Teller Of Death and you basically learn that she is a character on the run, she is in hiding, she has a past that she has kept hidden and tried to brush away. There are people after her and throughout the season you learn that as these people follow her, you learn more about her past and how she got to where she is. That is the jist of the series and it is kinda very True Blood-esque in its tone so it’s kind of scary, and it’s sexy and there is humour as well.”

One of the things that really hits you when you sit down to watch an episode of Jade Of Death is not only the brilliant cast but the excellent production design as well. “So when it came to the cast Bernie who plays Jade she was actually one of my students,” explains Erin. “I teach at some film and acting schools. And I saw her in class when we were about to open auditions for Jade, and when I saw her I was like ‘yep she is Jade’ and then I was hoping that she could actually act so I asked her to come along for an audition and it turned out she could so that’s how we found her. Some of the actors we know and have worked with before, so Susan Prior for example Taylor and I have worked with her before. And Nicholas Hope who plays Wilkins we approached him because I had always imagined him in the role and he just happened to be keen which was great, and Jordan who plays Maya we found while we were auditioning for Jade. So we got the cast in all different ways really.

Taylor adds. “The thing about the series is that it has a big cast. The centre is Jade but then there are other characters around her that are important as well. So in order to get that high production value we knew we needed a great cast. Erin works really well with actors and gets great performances out of them and we knew that we wanted that. In terms of the look and feel of the series, we were obviously working with a small budget so we thought the best thing to do would be to put that budget towards buying a medium quality type of gear so that we had some consistency and really push that gear to its limits, that way we could use our money to instead of hiring gear, which can be really expensive in the end, we actually owned it and if we had to we could sell it off and make the money back that way.”

Erin is also quickly to tell us that in order to get the series made they had to shoot it in an unusual way. “We also broke up the shoot depending on location and cast as well,” she explains. “With every shoot block we weren’t entirely sure how we would manage the next shoot block, because we wanted this high quality thing but didn’t necessarily have the money to achieve it. We took it step by step, so the inside intense stuff we all filmed in one go and that was just in my parent’s garage so that didn’t cost much.”

Taylor adds. “And then we would use that footage to go on and raise more money. We did some crowd funding with that interior footage that we shot and so we just had to keep finding ways to pull it all together. It meant we didn’t have but money but we had the time and it was the time that gave us that high production value.”

So was there a reason why it was decided that Jade Of Death should be a web series and not a television show? “Yeah absolutely,” says Erin. “I mean pitching to television networks is a thing and we are doing that now but you are such at the mercy of the powers-that-be and it takes such a long time and you really have to prove yourself, so for me I just wanted to go and make my own mini television series – right now, right at that time – I didn’t want to have to wait around and have too many different voices in the mix for it – I just wanted to produce a proof of concept and have something to show.”

Taylor agrees.  “And that is why we wanted to keep the budget low as well so we could do it because pitching it for television takes a lot of time and puts you under a lot of scrutiny on that development basis but we just decided to go and make it and then we would use the quality and the story to generate a bigger television series version of the web series which is what Erin wanted from the start. It started as a television idea so what we did was make what then could be a larger television idea with the same characters.”

Erin says she also felt like this was a project that she really needed to work on. “I think creatively as well, and I think all directors will get this, sometimes you just need to do a project that will re-ignite your passion for directing,” she explains. “You have to be doing what excites you and knowing what you want to achieve, so just going and doing something will do that and then you have to go back into that process of applying for funding and all of those things and that’s great, you need to do that for your career, but there are times when you just need to do something… you just need to be working.”

When I ask Taylor how everybody can see Jade Of Death she sends an invite out to everyone.” We are premiering at the Sydney Mardi Gras Film Festival, it’s the twenty fifth anniversary of the festival and it coincides with the 40th anniversary of Mardi Gras and we are playing on the 23rd of Feb and Erin and I will be doing a Q&A at the screening with some of the cast. There is also an option to buy an after party ticket as well. So go out and buy your tickets.”

Tickets are on sale now: http://tix.queerscreen.org.au/session_mgff.asp?sn=Jade%20of%20Death