Getting Back to the ROOTS with Igor Cavalera 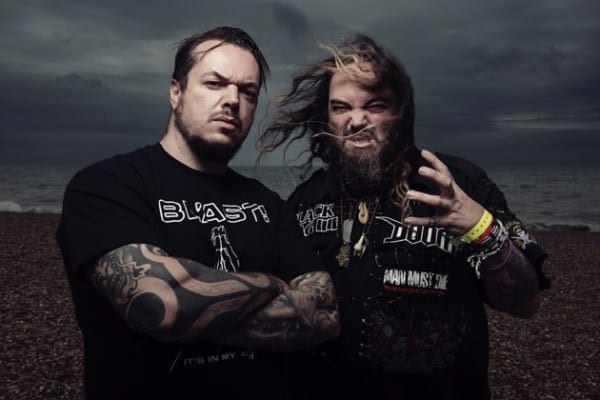 “It’s pretty cool to revisit in the sense that a lot of the stuff we have never played live,” enthused Igor Cavalera on their Return to Roots tour, which sees he and brother Max playing the classic Sepultura album Roots in its entirety for the first time. “Now we get to play the whole album from beginning to end, so it was quite a good challenge to go back to some of those ideas that I had twenty years ago and then replicate them live right now. It’s a really, really special challenge.”

At the time when Roots was released in 1996, it was a ground breaking album for many reasons. After experimenting with slower tempos and Latin-tinged rhythms on Chaos A.D., Sepultura pushed the boundaries like never before on Roots. It was here they fully utilised their Brazilian heritage and incorporated traditional instruments, infused by their metal leanings and whereby creating an album laced with music previously unheard of in the metal community.

It was ambitious and thought-provoking, an album that awakened a certain spirituality in the music of Sepultura that Max would go on to explore further with Soulfly.

“It was down to us experiencing our roots in music,” Igor said of the thought process behind the album. “The album pretty much tells what we were going through: which was experimenting with a lot of percussions and going back to the roots of Brazilian music to the fullest, which is what we did with “Itsari”, the track we recorded with native Indians. So all these things were important to have as part of the experience.”

To record the track “Itsari”, Igor and Max travelled deep into jungle territory to the ancestral home of the Xavante Indians to not only capture the music of the Indians but also immerse themselves in their culture.

“I think it was the coolest thing we did,” gushed Iggor, “as far as experimenting with music and recording. It’s probably one of the greatest things we have done in our history. It was a very special moment to collaborate with a Brazilian tribe and make music together. It was something that nobody had really done in that way, and for us to go all the way there and spend time with them, and to experience their ideas on how they made their music and then showing them how we made ours was something that was very, very special, and different at the time also. We didn’t know what to expect.”

Rather than just steal musical ideas from the Xavante, Igor says he and Max made a point of sharing their musical culture with the tribe in an attempt to not just use them for ideas, but also try to give them something they could potentially use for themselves.

“That was the cool thing about it,” he admitted. “A lot of people who visited the tribe before didn’t really exchange culture that much. It was just about going there and learning from them. This time we had something to show; something that was very different to usual. It was like, we’re not only taking stuff from you guys, we’re also bringing our music and turning it into something for you. So in that sense, they were already super open-minded about the process and it made things more interesting for both of us.”

The musical direction taken on Roots was risky, to say the least. Over five previous albums, Sepultura had set the benchmark for thrash metal and had made a name for themselves by experimenting slightly with each release, but until now, they had only sought to look outside of the square and not change the shape of it entirely.

“I have to say, it was a challenge,” Igor concurred. “At that time, not many bands – especially metal bands – were experimenting with bringing some of the heritage music mixed with what they were doing. So for us, it was something new in the sense that we didn’t know how people would react to it, so it was pretty exciting and a little nerve-wracking at the same time.”

Roots featured three instrumental tracks: “Jasco”, “Itsari”, and “Canyon Jam”; again, something unheard of in metal circles. It was a move which was to add a distinct flavour to the album, but one which Igor says was not premeditated.

“I don’t know why we did three instrumentals,” he laughed. “I would have to say everything was quite natural and quite organic from how we wrote it to how we recorded it so those ideas we never really had a plan behind it – it’s just how they came out. There were no big talks, it was just how we were going and how we thought certain songs should not have vocals on them and be more percussion orientated and everything was pretty much just at the moment.”

One thing that defied the experimental trend was the inclusion of Jonathon Davis, Mike Patton and DJ Lethal on the track “Lookaway”, with Igor saying that was more a case of timing rather than experimentation.

“It was just friends that were in the studio that we called in to do the collaboration,” he smiled. “That’s usually how we do things like that. It’s just people we admire – and eventually, they become friends – and we ask them as a friend to do something together. That’s how the whole “Lookaway” thing came together. It was just us at the moment thinking of who it would be cool to collaborate with.”

The choice of Davis, however, was not random, with Igor admitting early Korn work was influential in the sonic direction taken on Roots.

“Yeah, that was an influence,” he replied. “The first Deftones, and then the first Korn albums we were listening to them a lot at the time, so they were influential, but not only those bands. There was a lot of other stuff that we were into at the time that became a big part of what we were doing, but those two were right up there.”

Shortly after the release of Roots, Max announced he was leaving the band, but brother Igor elected to stay. Besides the obvious closeness as siblings, Max and Igor had played together in Sepultura from the ages of fourteen and thirteen respectively, which was particularly hard on Igor, the younger of the two.

“It was very difficult for me,” Igor remembered of playing on without Max, “to the point that I eventually decided it wasn’t worth doing anymore. I tried for so many years, and then I decided to stop with Sepultura and started doing things with Max again which is just such a natural thing for the both of us. He and I grew up together, so we fit well together, but those ten years without him were extremely hard.”

In 2008, the two brothers released Inflikted from their new collaboration Cavalera Conspiracy, a band that not only reunited two of the leading exponents of metal but also healed a fractured family relationship that had dragged on for too long.

“It was a good challenge for both of us,” Igor said of the new project. “Me and Max had talked about writing new music together, and for me, that was very important. That moment where we found something musically where we could move forward was a great moment for both of us. It’s cool to celebrate what we’ve done in the past with the Roots tour, but it is also important for me to be doing stuff for the future, and that’s what we are doing at this moment. We’re doing the Roots tour but we’ve just finished the new Cavalera Conspiracy record and it’s amazing to have those different things happening at the same time. It’s not only the past or not just the future; it’s a mix of both.”

With the Roots tour winding up after the upcoming Australian tour in September, Igor is excited about the release later this year of Cavalera Conspiracy’s third album.

“It’s pretty much done,” he says, excitedly. “I just received the masters and it sounds amazing. We’re pumped about it. It’s ten songs that are super powerful, and I think it’s gonna surprise a lot of our fans. I can’t wait to have it out. I haven’t been this excited about a record for a long time.”

While not wanting to give too much away, Igor concedes the album will take a slightly different direction to its two predecessors.

“I would have to say it’s quite different,” he offered. “It’s hard to put into words what we did musically with it, but it does sound different from the other Cavalera albums that we have done. The production is also different. We worked with a new producer that got a lot out of Max and I that we haven’t done in a long time, so I think it’s going to be quite surprising.”

While the album does have a tentative name, Igor says that fans shouldn’t become too accustomed to it just yet.”

“We have a working title, Psychosis, but it is only early days,” he laughed. “The album title is something we usually leave until the last minute. The more we listen to it the more we find new words and new ideas, so hopefully, that will be the title, but you never know. Until the last second when the label goes: ‘is this it?’ then Max and I will agree on it. Usually, it is the last thing we do.”