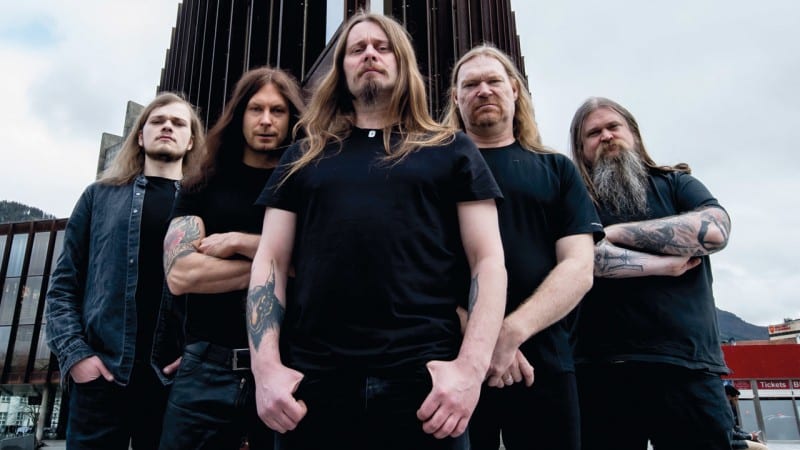 Fourteen albums and twenty-six years into their career, Norwegian band Enslaved is still very much a band that is evolving. The band could have rested on their laurels and celebrated the twenty-five years that they have been together, but instead, they embarked on a hectic tour schedule and then started work on their brand new album, simply titled E.

When Heavy Mag catches up with Enslaved’s guitarist, Ivar Bjørnson, our chat ranges from everything including mythology through to why he believes Enslaved’s sound has changed so much over the years.

“We are continuing our search for the essence of the band, really,” says Ivar. “That’s what we are trying to achieve when we are recording; we are trying to get that onto tape. For us, that is about getting the sound, on the first level we are trying to get the sound of our instruments and also what happens when we interact and perform together. With every album, we have gone more and more backwards into the live recording, and that’s basically what we want to do in the studio. So we go in there, and that’s how we start out. The first few weeks is just us in a big room, a room that has that room effect that we are looking for and then we record the songs as a band. Then we do a bit of layering and additions after that. I guess around 2008 or 2010; we decided that this whole studio style of recording just wasn’t for us, so we decided that we wanted to hear the instruments and we realised that we were losing a lot of interaction between the musicians. So we went back to the roots and started recording live in the studio.”

Ivar admits that when they first came up with the idea of searching for the essence of the band, it was a bit of a scary thing for them. “Yeah, it was a little intimidating,” he admits. “It sounds big and hard to find, but it actually turned out to be quite simple. It just required more work, I guess. With our long songs of ten or eleven minutes, and getting everybody to deliver their best performance at the same time, it took a lot, and it required more preparation. We find that we have to do more of the technical rehearsals before we head into the studio and it really puts the pressure on every band member to make sure that they are fully prepared. It’s kind of harder, but easier at the same time.”

We start talking about some of the longer tracks on this new album E, and while Ivar says it is hard to record them live, he also enjoys it. “It’s a lot of fun,” he says smiling. “It is very positive and very exciting to record those songs in the studio. It is, of course, a little bit nerve-racking because the longer the recording is going and the more it is nearing the ten-minute mark you don’t want that little mistake to make it go down the drain. But, I guess this is the third album where we have recorded like that, and we are getting a little bit more relaxed in terms of not getting so aggravated about making mistakes. We take our time more now with that stuff, and believe it or not, but it actually ends up saving us a lot of time in the studio. So it gives us a little bit more space in recording, so we use it.”

One of the things that fans have enjoyed about listening to Enslaved over the years has been the fact that the band has always been willing to try new things and we see that again on E where the band even recruited the help of a saxophone player on one of the tracks. “It’s kind of a natural development,” says Ivar. “I think our sound changes with songs, and I guess the songs change because of us as people and what we are listening to. There are always influences coming in from the outside world because we are listening to different kinds of music all the time, and then there is art, and there is life and all that stuff that influences us. So it all kind of happens just gradually, and I guess the organic way that we record helps with that – it just changes naturally with that… with the music. It’s all about the people in the band and their instruments. We’re not about being over-produced. And then with the saxophone, we’ve learnt that when we have an idea, we are pretty good at following up on that and working out how we can realise that. So pretty much through pre-production and demoing, somebody will say: “Hey, we should have a saxophone on there.” Then, instead of just moving forward, we actually go out and find someone that can do that and we invited them to go into the studio with us. I guess it is an advantage of being in a band that has been around for awhile because people tend to accept invitations to come into the studio and work with us. We found a great saxophone player, and he had never played with a metal band before, but he found that to be really exciting. He had done everything from electronic music through to children’s records and really crazy jazz, so we figured it was time he tried out metal, and he really enjoyed it.”

The big question on everybody’s lips is why Enslaved chose to call this album “E”, but Ivar says the idea was there from the very start. “It was there from the very start when I started to write the album,” he explains. “I started to get fascinated with the idea of the horse. How it plays in Norse mythology, and how it represents corporation and that positive dependence between two or more parties, so to speak. In this case, the relationship between Odin and his eight-legged horse. It’s more than a tale about how useful and nice a horse is it is about how a god and his people benefit from these relationships – both inside and outside his psyche. Then we looked at the rune that represents this concept, and that rune was the rune “E” used in the runic alphabet. The name of the rune itself is Ehwaz, and looking at that just opened up a whole new concept for us, and it felt like a good time to explore that.”

Ivar says he loves that moment when a concept comes to him that he just knows is going to end up as Enslaved’s next album. “It is a very positive moment,” he says. “That is the moment when you know that the album is starting to take shape. In this case, it happened before the music even started. It opened us up, I think. It’s liking seeing the contour of something; it’s like you’re in a dark room and then somebody turns on the light. You start to feel rushed in a positive sense and you sort of know where you want to go with it, and you start hearing abstract things, like how things will work and sound and song titles. It really is a glorious, glorious moment.”

E is out now through Nuclear Blast.

PrevPrevious.Saara And Brendan Drop By For Some Innuendo Interviews
Next.WINTERSUN Interview – ON AUS. TOUR NOW!Next