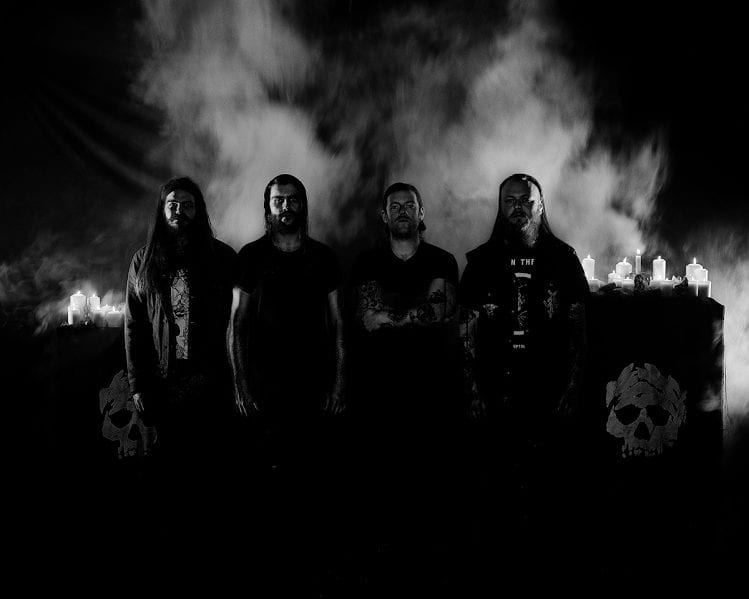 When you bring up Melbourne heavy hitters Colossvs to someone in the hardcore/metal scene, chances are they’ll respond with a remark resembling ‘what the fuck happened to those guys?’ After releasing their new track In The Absinthe of God and announcing another line-up change the other week, we caught up with drummer Ash Denman to clear up the story.

In case you missed it, the complications all started with former vocalist and scene kingpin Lochlan Watt defecting to fill in on pipes for Thy Art Is Murder, throwing the Melbourne metallers’ activity well and truly out of whack.

“We had a pretty solid line-up for the last sort of eighteen months”, Denman acknowledges. “And then all this stuff just started happening with the Thy Art Is Murder thing with Lochlan, and that sort of put us back to that same sort of feeling of uncertainty about the line-up and what was going to happen”. Smack bang in the middle of writing their new record, Watt was tempted away from the band, and this brought with it some real anxiety about the future of Colossvs.

“We were really stressed that it was going to delay that process for us and it was going to potentially even spell the end of the band,” he recalls, “And I think we were all pretty concerned about that. So I guess we tried to work with Lochlan on what the outcomes were going to be, and he didn’t know. In fairness to him, he was sort of up in the air as well”.

The solution to Watt’s conflicting responsibilities ended up being a severance of ties with Colossvs, enabling him to direct his focus to his touring obligations while his former band returned to the task of producing a follow-up to debut LP Unholy. To do so, they brought back their original vocalist Christopher Tew.

After two years away from Colossvs, bringing back Tew was, according to Denman, a “no-brainer”. “We’re back to where we started, with Tewy back in the band, and that feels really natural and really good. He’s pretty aggressive and a pretty angry dude, and that’s what we’re after. We’re pretty excited to see what happens next”.

Despite the awkwardness of the situation, Watt was more than willing to help the band get back on their feet, even premiering their latest single on his Triple J show The Racket. “The reason we did the single was because we felt like losing Lochlan, we had to make sure people knew who we were”, Denman notes. Despite Watt’s status in the scene, the move hasn’t lost Colossvs any fans. “For a lot of our fans who have been with us since we first started, I guess for them it’s just the band coming full circle. In the same way that Lochlan sort of became the face of Colossvs, it was definitely Tewy’s band before it was Lochlan’s”.

Looking to the future, Colossvs will induct Tew back into the squad by heading out on tour this month in support of the new single. With the revitalisation of the band comes a new ‘look and feel’, which manifests in activities that are a lot more streamlined’. That doesn’t mean the identity of the band is going to be lost in experimentation, though.  “We don’t wanna be one of those overly technical metal bands, we just wanna play music that we think is super dark and aggressive”.

If you’re keen to hear some more of it, hang tight. You can expect some new music from Colossvs mid-next year.