[INTERVIEW] Basking in ANOTHER LIGHT with RED VOX. 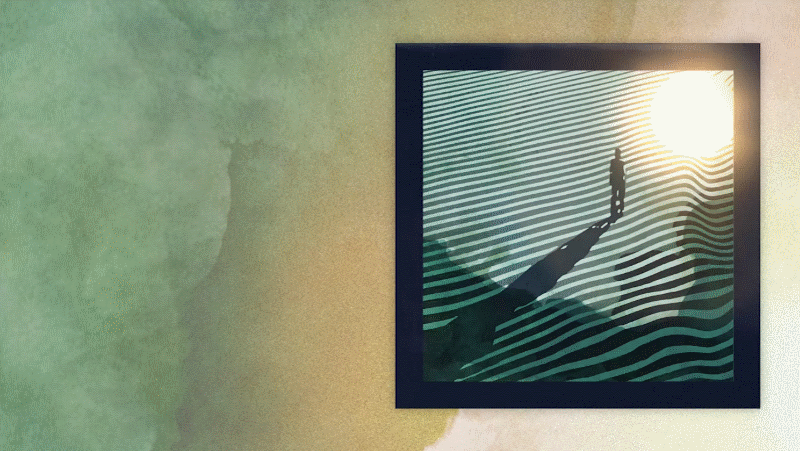 My last interview with self-professed binyot [Urban Dictionary: A idiot who plays baby games] Vinny Pizzapasta was a suitably weird mishmash – essentially two separate interviews: one about his Youtube channel and streaming group, the glorious mess that is Vinesauce; the other about his indie rock band Red Vox, whose subject matter ranges from melancholy introspection to PTSD caused by ball-pit clown vomit.

…That’s the way I used to describe Red Vox, in any case. I’m guilty of doing Vinny an injustice, relating Red Vox too closely to Vinesauce and its unique comic style. With the dawn of Another Light, the newest album from Red Vox, the difference couldn’t be clearer.

Another Light is a psychedelic trip that distinguishes itself from previous albums by its slow, often melancholy rhythms, much more attuned to the Bowie influence mentioned in the last interview. On the subject of influences and inspirations, though, one would need a map to keep track. Graciously agreeing to answer some of my burning questions about Another Light, Vinny had this to say:

‘Another Light draws from the numerous inspirations we all have as a band. The most obvious ones are The Pixies, Queens of The Stone Age, Tame Impala, Nirvana, Bowie, Floyd, etc. On this album, there’s a variety of different styles, so while ‘Reno’ sounds influenced by QoTSA, ‘Burn a Picture’ drew inspiration from Radiohead. Speaking of Radiohead, their album A Moon Shaped Pool came out halfway through us recording Another Light, so we were certainly in that headspace for some of the songs. After release, some drew comparisons to OK Computer, which I think I agree with, structurally at least. With rock music, we draw from decades of bands. It’s difficult to find something truly unique and new in the genre, so we wear our inspirations on our sleeves, but also try to introduce ourselves into the music. Finding interesting melodies and writing good songs is my ultimate goal.’

Another Light tells a story of love and loss, of an outsider looking in on the happiness of others and regretting all the could-have-beens. It invokes an emotional journey and invites the listener along for the ramble, intimate in its sadness, evocative in its imagery. I have a theory that Another Light is a clever, musical depiction of the Five Stages of Grief, but that’s just conjecture.

Asked about his favourite song in the album, Vinny again proved himself a true interviewer’s friend by offering a long, detailed discussion that makes my job far easier.

‘It’s hard to choose a favourite song because we spent a month or more on each. A song like ‘Burn a Picture’ started out as a demo on my computer, but was fleshed out further in the studio. In fact, we used my demo’s guitar and bassline because we couldn’t replicate the feel in the studio. It seems like a small detail, but I can easily obsess over stuff like that. Melodically, I think ‘Memories Lie’ might be my favourite. We ended up delaying the release of the album by a couple months to record it and I’m happy with how it turned out. Conceptually and lyrically it also really works for me. Also, I may be a bit biased, but I got to do some Brian Wilson–esque harmonies in the middle of the song, so any time I get to channel The Beach Boys, I’m happy.’

Red Vox is a relatively new, yet prolific band, having produced two albums (What Could Go Wrong and Another Light) and an EP (Blood Bagel) since 2014. Red Vox’s favourite subject matter seems to be loss, failed opportunities, and inner journeys – What Could Go Wrong chose a classical rock approach to this, while Another Light basks in a sombre, almost Jazzy tone. Intrigued, I asked Vinny why Red Vox chose to take this approach.

‘I think Another Light is a pretty naturally extension of what we were doing on the first album. The psychedelic stuff is in all of our wheelhouses, so it’s not too much of a stretch to go there. A lot of these songs were kind of written by accident in a jam or even weirder, came from a dream. ‘From The Stars’ was something I ripped almost directly from a dream I had, down to the mellotron and other arrangement stuff. Even some of the lyrics were pulled from the dream, so who knows where any of that comes from.

With this set of songs, experimentation felt easier. We played around with a lot of sounds until we found the right ones. Synthesizers, guitar pedals, keyboards and VSTs were all on hand after we laid down the basic song structures. ‘In The Garden’ actually started out as a guitar driven song, but Joe had the idea to take as many of the guitars out as possible and go full synth. I went home, programmed all the parts for a synth and it sounded way better. I don’t know if we’ll ever divorce ourselves from guitar-driven rock, but stripping some of that off and replacing it can be rewarding. I think we’d like to try some more rhythmically heavy songs next. On the flipside of that, I have a number of acoustic songs that I’d like to try out.’

Something I didn’t really cover in my last interview is the history of Red Vox – a subject Vinny was happy to elaborate upon.

Red Vox started in 2015 as an attempt to get Mike and I off our asses. We were in a band together in 2009 called Davy’s Grey, but after that fell apart I took a break from music for about 5 years. I still played the guitar and recorded an instrumental here and there, but nothing with any level of consistency. Those 5 years kind of sucked. I’d been playing and writing songs since I was 18 so it became a big part of my identity and even happiness. Stepping away from that had a greater effect on me than I realized. So, 2015 rolls around and Mike suggested we jam and see what happened. I had some recently written songs and they felt good play, so we kept jamming.

Eventually, we decided to record some songs. I had known of Joe through Billy, our future keyboardist. I knew he had a local studio and that he was good. His album Reset with Happy Anarchy is proof of that. In April 2015, we had our first recording session for the song There She Goes, an older song from the Davy’s Grey days. Joe played bass and lead guitar on the song and it instantly sounded so much better. Basically, every song we brought to him ended up sounding better. We needed keyboard parts for a few songs, so I called Bill and he was happy to join us. Like Joe, he elevated the songs to another level. It felt right to play music with these guys. The name Red Vox came from a dream I had in late 2015; it stuck. In early 2016 our first album, What Could Go Wrong, came out. The reception was surprisingly positive. I didn’t expect my audience from Vinesauce to even pay much attention to the album, but luckily they did. Usually, when someone in one field attempts to work in another art-form, it’s just something to shrug off. We wanted people to take us seriously and give us a shot…which is why we released Blood Bagel. Well, never-mind – we don’t talk about Blood Bagel.

(Interviewer’s note: ‘Vomit in the Ball Pit’ is a musical masterpiece.)

Even before Blood Bagel came out we were working on Another Light. By mid-2016 we had two of the Another Light songs already mostly recorded. The rest of 2016 and 2017 was dedicated to writing and recording the rest of the songs. It was a long process and one we’re not looking to repeat right away. At the moment we’re focusing on the vinyl which will have a 9-minute new song. We’re excited to get this done and maybe take a short break. After that, who knows: maybe a couple of live shows? I feel our strength is in the studio, but we’d all enjoy taking the songs to a live setting. It all depends on if I can get up off my ass again.’

You can listen to Another Light on Bandcamp or the Vinesauce channel. Please support Vinny so he gets off his ass again.