The Different Sounds of AZREAL 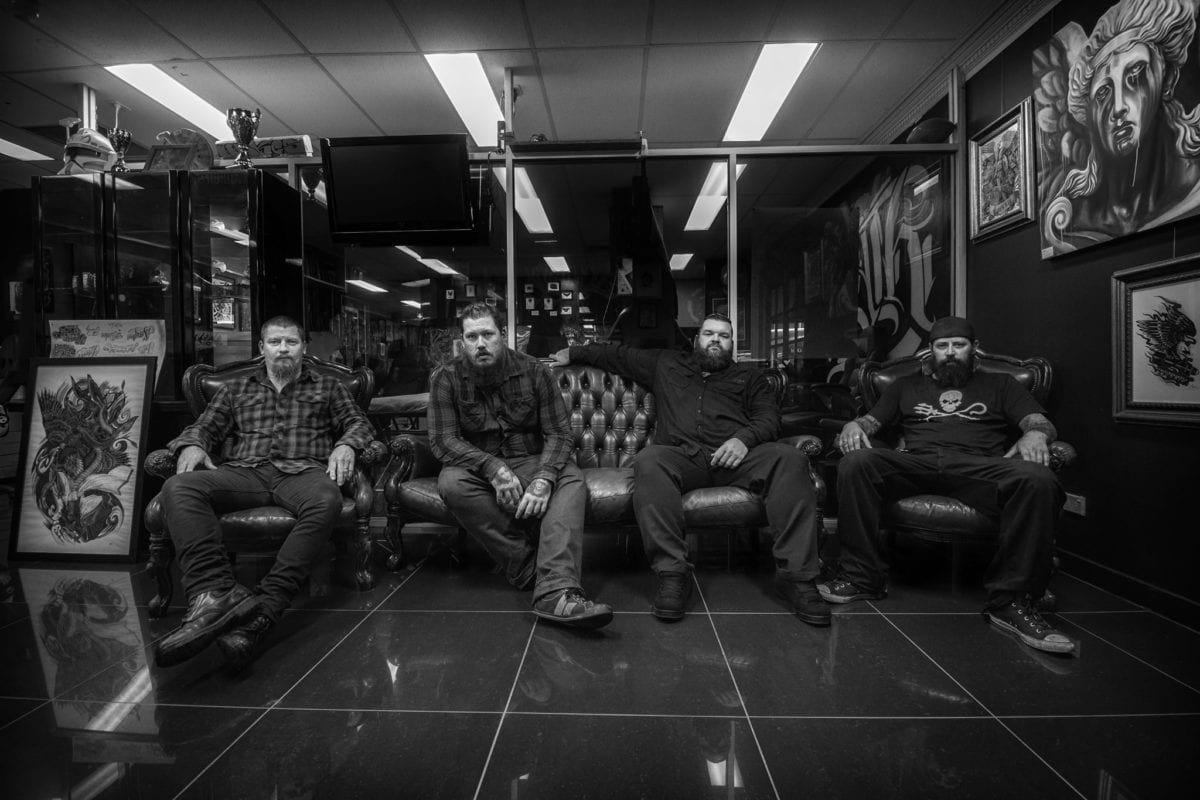 The members of Gold Coast thrash/groove metal band Azreal allowed me into their inner sanctum recently to have a chat and listen to some songs from their next album in the rehearsal room. It is a privilege not often bestowed upon music journalists because far too many bands either don’t trust them or don’t want wind of anything new coming out too early, but kudos to Azreal for opening their doors and my ears for a little insight into what makes the band tick.

After forming in 2007 with vocalist Luke Hosking and bass player Scott Campbell, Azreal struggled to find consistency and longevity in a guitarist and drummer, with Jimmy Glinster and Chris Dennis finally rounding out the four piece in 2013.

After slugging away on the local and national circuit for ten years, Azreal finally got their big break earlier this year when they were selected to open for Devildriver and Death Angel across the United States. In a move that had seen the boys return even more focused than they were before, they ventured outside of their comfort zone.

“It was fucken insane,” Glinster enthused. “Yeah, we had a lot of fun. It was pretty special,” Campbell confirmed.

“It was a massive undertaking,” added Hosking, bringing a touch of reality to the conversation. “The logistics of getting that tour to happen… firstly getting on that tour and then actually achieving it. We didn’t know if we were gonna survive it or pull it off until we did. It was us just figuring it out as we went along sort of thing. The pieces would fall together as we went and then they’d fall apart, and it was a bit of a character building hell trip. We blew four of our six tyres while we were on the road which was testing.

“We started in Colorado at our manager’s place and headed out from there, and we didn’t even get out of Colorado before we did a thermostat (laughs). It was almost a case of ‘are we even gonna make the first show?’, But we got there and got through the rest of it.

“We’d never done more than four or five shows in a row,” Hosking picked up, “so to go out and do a run of eighteen shows nearly every night… you just didn’t know if you were gonna be sweet at it or if you were gonna do ten nights, then be dead. All in all, it was awesome.

“We were all dying of the flu by the second week as well,” Campbell added, “because we went from Summer here to Winter over there and it was close to zero degrees in places. We went something like Colorado, California, New York and then back down to Arizona, so it was cold, warm, cold, snow, warm, snow…”

To the average punter life in a band, in general, is an exciting way to spend your days, but the thought of touring internationally conjures all sorts of images of partying on the road and living life to excess which could not be further from the truth.

“There’s not much glamour about it,” rebuffed Glinster. “It’s hard, real hard. It is all self-funded and hopefully, you make enough in merchandise as you go around to keep the bus rolling. I think about the third week in it got to that point where if we weren’t selling enough merch every night then the bus would just stop but we got through it. I guess some of the biggest things to realise is it is a lot of hard work and sacrifice – more so than people realise because basically you just get to a venue about lunchtime then you set up and do sound check then you do the show which ends around midnight again then you jump on the bus and sleep and you wake up and you’re at the next show and you go again. There’s not much time in between. You just go, go, go constantly.

“You can’t get on it either,” Hosking interrupted. “People think it’s just one big party, and you’re just getting hammered but if you did you would only last the first two weeks, depending on your constitution. It’s also physical. We all got sick. I mean, we were having a drink and smoke along the way – because weed is legal in a lot of places over there – so we would divulge somewhat, but we were always focused on making sure that we did a good job of every show. That was our aim, not to have a party.

“That was our number one priority,” Campbell affirmed, “to keep it real for the shows. And making it through the tour (laughs).”
While treating an opportunity such as that as not only a great life achievement and chance to spread your music to a legion of new fans, Glinster also says you learn a lot about yourself and your music being away from home.

“Also how to maintain yourself throughout,” Hosking added, “and not blow out or go too hard in one night. If you do, you’re fucked for the next few nights – especially as a vocalist. If you go hard the first night, too hard, then you have to recover while you’re doing the next shows, so you learn to give enough but also keep enough so the next night you’re good again because the recovery time is short. For a show in Australia – like Shredfest we have coming up on August 26 at the Back Room in Brisbane- I can get drunk, do whatever I want, get hammered and scream my guts out and go nuts if I want because I’ve got all the time in the world to recover. You don’t have that when you’re playing night after night, so you have to balance what you eat, what you drink, how hard you go and all that sort of stuff.”

When Azreal first came to fruition a decade ago, Hosking says they didn’t have a vision or a mission statement other than a shared love of music and the desire to have fun with it.

“We just wanted to get out there and play some music,” he admitted. “I think originally I wanted to start a really heavy band. I was listening to Opeth and stuff like that so the idea at the start was just to play heavy, groove orientated music and it’s always – especially at the start – been limited to our skills. Whatever we could play would come out. It wouldn’t be super fast and thrashy because at that time our drummer would play at that certain rocking groove kind of way. If we had someone then who was crazy it would have been different, so it was always a case of whatever it was we could achieve is what we did and we just pushed as hard as we could. Early on, I feel like… I don’t really like listening to early music because it was part of our development. I guess we were just there to smash it out and have some fun. There wasn’t any long term goals or anything.

“And each time one of these two blokes respectively joined,” Campbell said, pointing at Glinster and Dennis, “it just seemed to step up a notch.”

Now Azreal has returned to their home country; the boys are keen to get to work on the follow up to 2014’s Premonition, with Glinster revealing the process is well and truly under way.

“We will have something new out in 2018,” he stressed. “We’re about half way through writing the album now. We’ve been playing some of the new songs in the last couple of shows.”

After releasing the behemoth of a single “Beast” recently, Azreal was kind enough to expose me to three other songs from the album, “The Mist”, “Infected” and “Lord of the Flies”, and I can tell you first-hand even at this early stage the songs are meatier and full of more venom than anything previously released. I loathe to use the word, but it represents the next step in the musical evolution of Azreal and should see them capitalise on their overseas venture and finally break out in Australia.

One of the strengths of these songs, and in fact anything put out by Azreal, is the diversity in sound, with their eclectic nature refusing to allow the band to be pigeon holed into a set genre nor allow fans the chance to grow tired of their music.

“I don’t think it’s an actual aim,” Campbell mused of the differing natures of their songs. “I think it just comes through naturally.

“It doesn’t happen on purpose,” Glinster seconded. “Say if I’m sitting there writing riffs… something there might be on purpose, or I might have heard a song I like, and I wouldn’t mind trying to write a song like that and I might start with that, but other times it is just random riffs that pop into my head. It’s not like there’s ever a case of us saying we’re gonna write an album that’s pure thrash because to tell you the truth that would bore the shit out of me (laughs). When I hear albums where every song sounds the same it does get boring. We’re not trying to make every song sound different; it’s just the way it works out. The riffs come out, and everyone throws in their little bit, and Chris might have a different drum groove to what I’m thinking for a riff, and that changes it again.

“It comes back to whatever comes out,” Hosking chimed in, “and all of our different skills combine and that’s what we’re capable of. We’re capable of thrashy stuff and groove stuff and the bits in between but that’s what a lot of people said about Premonition when it came out that it was varied and it just worked out that way. It surprised us all but it was a bit different, and I guess that’s just the sum of all our parts. We didn’t just think thrash or we didn’t just think groove; we don’t talk or think about any of it. We play, and it comes together which is good. I’m glad we can pull that off.”