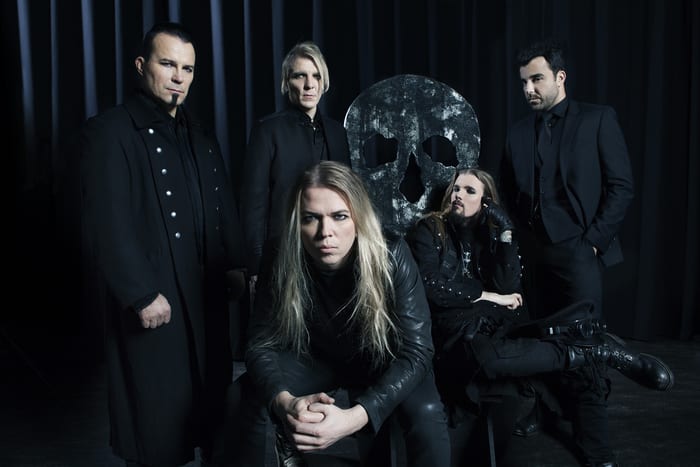 Apocalyptica is arguably one of the most unique metal bands you will ever come across. The Finnish cello veterans Eicca Toppinen, Perttu Kivilaakso and Paavo Lötjönen have been taking the world by storm ever since they recorded cover versions of Metallica classics twenty years ago. Having first played with the band in 2003, only to become a permanent member in 2005, Mikko Sirén has proved to be an important addition to the band’s classical-infused metal. It was a long time in the making, but ever since Apocalyptica’s first visit to Australia in 2012 they have started to gain more recognition here and they are now returning on a regular basis. This being said, there are still plenty of people who are yet to discover the wonders of cello metal.

“Apocalyptica started as a project of these guys who were training cellos at a university of classical music. The guys were open to every kind of music and they liked a bit of everything, they also loved metal music, they decided that they didn’t only want to listen to that music, but also play it,” says Sirén when asked how he would introduce the band to a random person in the street. “The only instrument they could really play was the cello, so they had no bigger plan, it was just a fun thing to do. But it just caught fire, then they started to do shows live and show people what they do with their instruments.

“And ever since then, it’s been an ongoing exploration. We don’t know where this train is going but we are enjoying the ride so much. Now, over 20 years later, we still feel like school boys. We get to see the world, we get to meet the people, just to get to play, I at least try myself to never take it for granted. We are blessed that we get to do something like that.”

For many years Apocalyptica invited some of the biggest names in the industry (Dave Lombardo, Corey Taylor, Till Lindemann just to name a few) to collaborate with them. But that changed last year as the band introduced fans to Franky Perez, an American singer who had previously released three solo albums and performed alongside Slash.

“While Franky is not a band member still, he’s the permanent guy to be with us at the moment,” Sirén states. “We went so many years, 15 years or something like that, we did songs with many artists, it’s wonderful where you get to meet wonderful musicians, you get to work and create music together with them. After we had done that for so long, we thought that ‘we could continue to do this to the end of the world’, but to have something else to kind of challenge ourselves. We wanted to see how it would feel to have one voice for us. Not to go in many directions, but choose one voice that could do it all.

“It was a great change for us, it made us feel alive in many ways. To have him on tour, he’s a wonderful singer with an amazing personality. He puts his whole heart into this band, it’s a great thing. He’s toured with us for two years exactly now and we are really looking forward to coming to Australia with him now. He was of course with us for Soundwave already, but now we get to do another tour where he can sing more, so that’s great!”

September 30 marks the 20 year anniversary of Apocalyptica’s debut album, Plays Metallica By Four Cellos, an occasion that was celebrated with a remastered release earlier this year. The band will also be heading on an anniversary tour in 2017.

“Next year will be dedicated to the anniversary tour of our first album,” asserts Sirén. “The first half is going to be the record played as it was played back in the day, four cellos, 43 minutes, played straight and that’s it. Then there will be an intermission and then I join the guys for the second half of the set where we will do some more Metallica tracks with drums included.” He then adds, “We’re still planning the next year and how we can fit everything into place. We’re coming to Australia in less than a month, it will be quite quick. Next year is completely dedicated to this Metallica thing.

“So, we will try to figure out a way to come back to Australia for sure. We will try to cover the whole world. Now when we go there, it will be a good time to feel the vibe, see how we could make it work and which cities that could be included on that tour.”

Founding member Antero Manninen will also be joining the band for the anniversary tour. However, it was never a question of him returning to the band on a permanent basis. “If you ask me, he would never come back for good! He loves his place in the Lahti Symphony Orchestra, it’s where his heart is. He likes to play with us of course and he’s a wonderful guy, but he wouldn’t ever change his life back for the craziness that we are doing. It is great to have him back, our fans love him, he has such an amazing personality and he is a strong guy on stage, it will be fun to have him back.”

Australia was one of the first countries to be introduced to Shadowmaker as the band performed a couple of songs from the album during their Soundwave run in 2015, a month before release. “When we went to Soundwave it was the very early stage, we only played two songs from the album. But now, of course, there is much more focus on the new album. But we will do Metallica songs from the first album, we will do songs from all the other albums in-between and Franky will sing the parts that has been sung on the albums by other artists. It will be great to get to go to clubs again.

“Soundwave was my favourite festival in the world, but the feeling to get to go close to the audience and to build a whole evening the way you like it is a wonderful thing for us. We hope that we can offer something for our fans that they couldn’t experience anywhere but in our shows.”

On the topic of Australia, Sirén recalls the first time the band set foot on this big island of ours. “The weather! It was during the winter of Finland when we got to there, it was so warm and beautiful. People were amazing, the sun was shining, the food was great and we played all the great gigs. The first ever gig we played was in Brisbane, we went for a long run along the river. Getting to see that and feel the warm air on your skin when running, it was really something to remember. We had long nights out and great gigs, it was fun!”

When asked to tell a random fact about each of his fellow band mates, Sirén laughs and says, “Now I have to try to be kind… Paavo is a qualified ski instructor. He is a passionate skier! Eicca loves to play with chainsaws. That sounds really bad. He really loves chainsaws and that’s no joke. He loves to take a man day out where he will go to the woods and cut some trees. Perttu, oh my goodness. Perttu has got over two thousand rare recordings of classical operas in his home. He is the most passionate opera enthusiast I ever met.”

Before our talk was done, Siren had one last message for the Australian fans. “Please come to check us out. For those who haven’t ever seen us, I guarantee you can’t imagine how it is live even though you know the basic concept of what Apocalyptica is. For those who have seen us, please come to see us again, come to say hi when you see us, whether we are by the venue, in a café, or in the street, come and say hi! It’s a wonderful thing to get to meet all our fans and we are really looking forward to coming over there.”