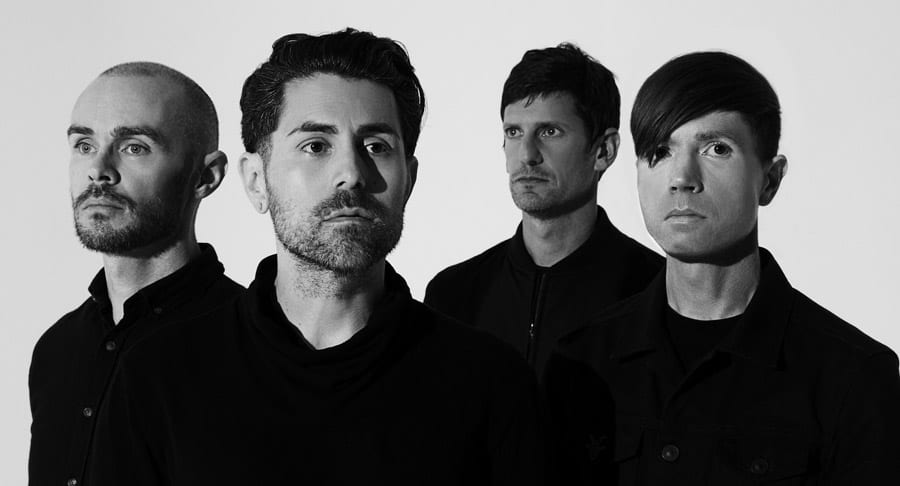 As was revealed last night, American rockers AFI are on the return to Australia for their first headlining tour in ten years. Shrouded with a colourful cape of secrecy, this announcement has been under heavy guard though it’s not an unusual move for the band. In recent years AFI has taken to suddenly changing gears in their style, blacking out their social media and suspending album announcements and combining visual aids with snippets of new music to grab attention. Frontman Davey Havok was oblivious to the element of surprise surrounding this tour, however. “Is it a secret?” Havok asks, “Oh that’s fantastic – that’s the general method of operation, I don’t know why, but that’s always been the case,” he giggles.

The assumption here behind the surprise tour announcement was that AFI wanted to tease and coax their fans in similar ways like they did with the revelation of current album “The Blood”. Fans were left in a panic when AFI blacked out their social media, there was confusion, there was excitement – but in using these sort of tactics, does Havok think they’ve been effective? “Certainly,” he says, “It’s getting people to pay attention to music as opposed to the way we used to work in getting people to pay attention, it’s completely different. With there being the Internet first of all, when we began there was very little to none of that… well, actually none of that! And so, the way that people become aware of music has changed so drastically, social media is a strong voice in sending messages these days, a lot of people who aren’t consumers and who are art aficionados look to social media for that information.

“In addition, the tool that we have, the resources that we have for expressing ourselves have grown by way of advances in technology that allow us to create different forms of media to present our music, to make little video clips and use those tools to spread the word in a very efficient way that is actually, with the help of our team, a somewhat streamlined way of reaching people directly. Whereas before it was a greater blanket, you didn’t know who you were reaching but now you know exactly who you’re reaching and now we can really hone our messaging and present it in a way that is congruous with the music that we create, actually expand and create a tone both visually and sonically for the presentation of what we have to come. That’s something we enjoy doing and from what we’ve seen, the fans appreciate that as well because it adds additional elements to what we’re putting out there.”

These elements of surprise were indeed appreciated by fans and the media alike, with critical acclaim for ‘The Blood’ returning overwhelmingly positive. “It’s been so great,” Havok gushes, “The reception has been so strong for this album people seemed very excited about its release before it actually happened. We saw so many ‘Blood’ tattoos before there was even one song released” he laughs, “Which is such a great display of faith. It continued after there were only one or two songs released, that was very touching.

“The real testament to the reaction was when we went on the first ‘Blood’ tour and saw the reaction to the songs when we were playing them live which were very strong, very fulfilling. To see people responding to the music that means the most to us, it was really great.”

On the scene since 1991, it’s a little surprising that Havok after all this time can indeed, be surprised. Though there’s certainly a deadest loyalty among fans, AFI has seen some real change throughout their career, both personally and within the industry, change over which Havok could easily spend an exuberant amount of time in deep reflection. “That discussion could be hours long in itself! There have been many changes for us over the years that have been very, very impactful.

“I think the most profound for us–I mean the industry is one thing and that really affects music, how music is distributed and how music is consumed. The inherent value of music and the perception of that has shifted since we began making music–but, the inherent value of music for us hasn’t changed at all and that is the reason we started a band, out of love for music and a passion for creating and being part of that form of art – as we grew as people and as we grew as songwriters and our abilities grew, our perspectives, so did our music and that allowed us to continue enjoying what we do in a very unique way that is also, at the same time being able to continue to reach people. That’s kind of a broad stroke to answer your question but it is one answer.”

Change though there may be both within the confines of the AFI camp and the higher powers in the business, it’s not ever been enough to put a halt on the longevity of creative ideas for the group. “There aren’t too many theatrics, it’s really an extension of a genuine expression of who we are and who we were at the time we were writing,” explains Havok. “Any one album is a representation of my sentiments or perspectives, as I’m given the luxury of writing the lyrics, usually socio-politically or internal at the time of the creation of that record. I’m very inspired by the music that gets presented to me, bodies of music may move me in one creative direction or another as well. As far as external influences, there aren’t many and there haven’t been for years, we’re all very big fans of many different types of music and all the music we’ve grown up loving very much is a part of us and imparts n our creativity in a subtle way rather than a direct way.”

And now that the Australian tour announcement has dropped, it will be interesting to follow any further theatrical outbursts from AFI, perhaps making yet another announcement that provides something special for Australian audiences on this great occasion. “It’s very common for us to slowly impart people with information to get their attention,” says Havok, “It is very difficult to get their attention for the same reasons that it easy to reach them with the amount of information that people are consuming at the time, it behoves anyone to continue to do so,” he laughs.

“To remind people of the information you’re giving them, if we can do so in a way that really furthers again the greater aesthetic of what we’ve created, then we certainly will.” 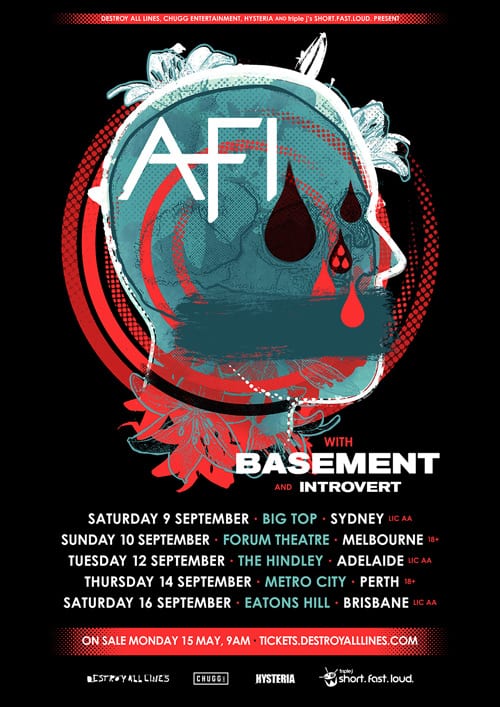