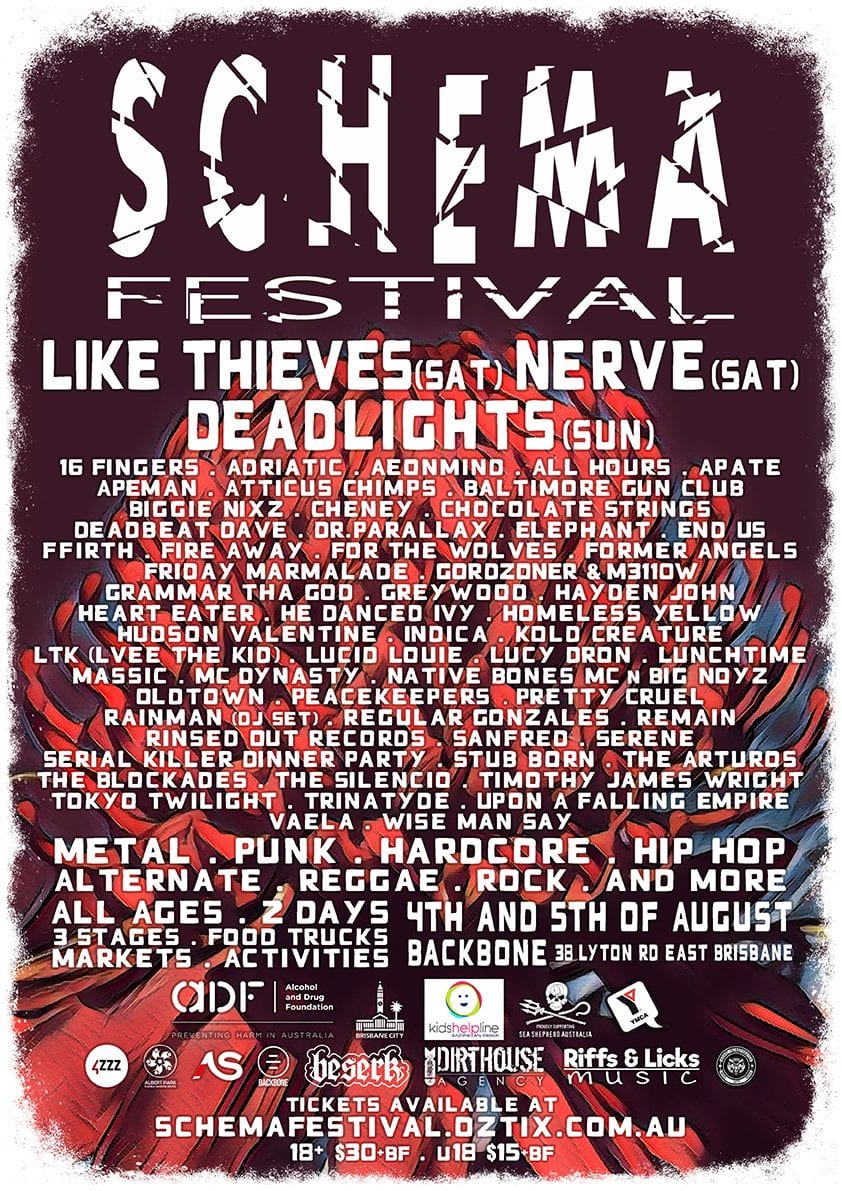 Share on facebook
Share on twitter
Share on reddit
Share on whatsapp
Share on email
The SCHEMA Festival is the first of a new series of yearly large-scale events for Brisbane. It will promote new and established musical acts while showcasing youth-relevant organisations and services. It is an all ages event, supported by the Alcohol and Drug Foundation, aiming to provide at-risk and low SES young people with an array of engagement opportunities, as engagement is one of the strongest protective factors against mental illness and substance abuse. The festival will be funded through support from the ADF, local businesses and donations. The cost of the tickets will be kept at a symbolic minimum rate with concessions for Under 18s, Students, 4ZZZ Subscribers, Members of Partner Organisations, and other Concession Card Holders. Attendees from schools with low SES will be granted free access via tickets donated to the schools.
The full line up for the inaugural SCHEMA Festival to be held at the East Brisbane Bowls Club on August 4 and 5 is designed to showcase and promote local bands and musicians. SCHEMA will be headlined by Like Thieves, Deadlights and Nerve and is made up of a further 50 + acts over two days covering all ends of the musical spectrum.
Tickets are available now from https://schemafestival.oztix.com.au/ for one or both days and is an all ages festival held over three stages.
Full line up:
Like Thieves, Deadlights, Nerve, 16 Fingers, Adriatic, Aeonmind, All Hours, Apate, APEman, Atticus Chimps, Baltimore Gun Club, Biggie Nixz, Cheney, Chocolate Strings, Deadbeat Dave, Dr. Parallax, Elephant, End Us, ffirth, Fire Away, For the Wolves, Former Angels, Friday Marmalade, GORDZONER & M3110W, Grammar tha God, Greywood, Hayden John, Heart Eater, He Danced Ivy, Homeless Yellow, Hudson Valentine, Indica, Kold Creature, LTK (Lvee the Kid), Lucid Louie, Lucy Dron, Lunchtime, Massic, MC Dynasty, Native Bones MC n Big Noyz, Oldtown, Peacekeepers, Pretty Cruel, Rainman (DJ set), Regular Gonzalez, Remain, Rinsed Out Records, Sanfred, Serene, Serial Killer Dinner Party, Stub born, The Arturos, The Blockades, The Silencio, Timothy James Wright, Tokyo Twilight, Trinatyde, Upon A Falling Empire, Vaela, Wise Man Say
The SCHEMA Collective is an alliance of musicians and artists in the Brisbane underground music and arts scene that create events that support deserving organisations and charities.
To date, they have organised successful events for groups such as 3rd Space, Sea Shepherd, #StopAdani, and several others. SCHEMA strives to cultivate an accessible and inclusive music and arts scene that is free from misogyny, homophobia, bigotry, racism, or any other prejudiced ways of thinking that slows the progress of acceptance and empowerment of fellow human beings.
The SCHEMA Collective can be found on Facebook!
A compilation album showcasing bands that have performed at SCHEMA Events can be heard here!