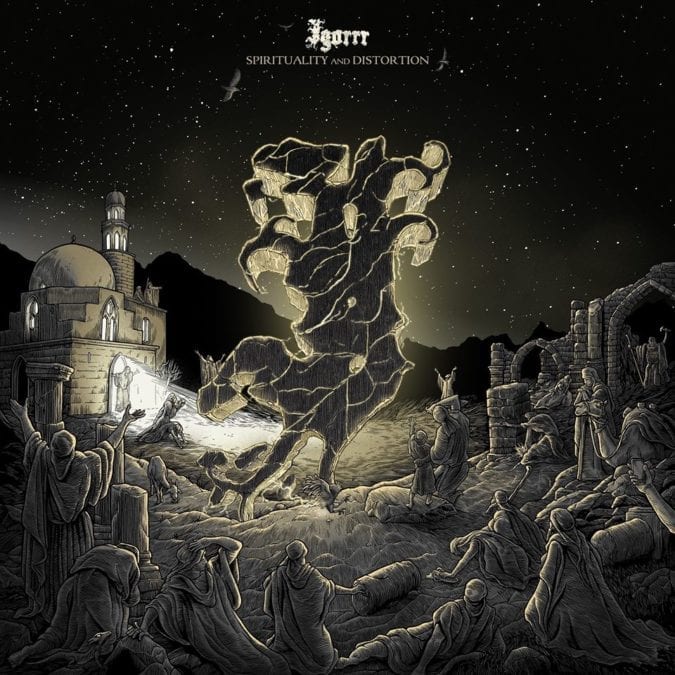 “My love affair with Igorrr was born of Gautier Serre’s ability to bend and mutate sounds and instruments to create meaningful, full of life pieces of art, disguised as songs. They are unapologetically jarring, discordant and confronting — yet beautiful, cohesive, perfectly formed and balanced. That is what makes it either hard or easy to listen to Igorrr; you get it or you don’t.”

Igorrr are so off-kilter, left of centre and discordant that every time I get word of something new from them my pulse quickens in anticipation. Their previous album, 2017’s Savage Sinusoid was my album of that year. My absolute adoration of Igorrr, more notably, the sonic creation and manipulation of sounds and noise to create magnificent beautifully brutal music courtesy of Gautier Serre, plus his many creative minds of collaborators whom collectively banded together to bring to life the crazy apocalyptic schizophrenic world that is France’s Igorrr and 2020’s incredible Spirituality And Distortion becomes even more evident!

If you are a virgin to the world of all of Igorrr intricacies and their genius malevolent ability to divide, splice and reanimate song structures, be forewarned you may well never want to listen to music again after encountering their art. Gautier disguised as Igorrr manages to create a picture-perfect image, reminiscent of Salvador Dali’s surrealism, through sounds morphed into music then albums and into video representations that is absolutely NOT everyone’s cup of tea; but should be!

The Introduction on track one “Downgrade Desert” could absolutely be the opening of a spaghetti western gun slingin’ showdown between John Wayne and some low life varment. Then unexpectedly yet expectedly the familiar drum slam of Sylvain Bouvier kicks in and the song morphs into a slow post-apocalyptic Mad Max theme tune featuring some of Gaultier’s familiar mind-altering electronic sampling. Even though at the point of 1 min 57 secs we have barely tasted a morsel of Spirituality And Distortion’s sumptuous menu as participants in its vast feast, we the listener are stuffed full thanks to hearing Igorrr’s permanent female vocalist Laure Le Prunenec and longtime contributor (also of Öxxö Xööx fame) Laurent Lunoir opening their vocal cords and adding their familiar and perfect Igorrrr encapsulating talents to the overall vast landscape that is Spirituality And Distortion. At this, the mere two-minute mark “Downgrade Desert” becomes an avant-garde middle eastern country death/black metal slow groove industrial mental asylum bursting forth from your stereo. The above description of the album’s opening talents can barely articulate with any degree of accuracy, the inner workings of what Gautier and his Igorrr beast is. I can only attempt to be a conduit for them and give you my honest response to what you’re about to hear.

So as abruptly as “Downgrade Desert” finishes a beautiful chamber orchestra introduces song two “Nervous Waltz”. Here we have a blend of industrial operatic noise incorporating an electronic groove and Ministry-esque blast beat-laden beast that hauntingly ebbs and flows in its schizophrenic bliss.

My love affair with Igorrr was born out of Gautier’s ability to bend and mutate sounds and instruments to create meaningful, full pieces of perfect art disguised as songs hence transforming music to far beyond places anybody could imagine it could go. They are unapologetically jarring, discordant, confronting yet all being beautiful, cohesive and perfectly formed and balanced. That is what makes it either hard or easy to listen to Igorrr. You get it or you don’t! Most of my friends don’t get it…But those that do are my closest friends.

These ideas and thought processes are perfectly visually represented on the three-part Youtube “Making Of Savage Sinusoid” mini doco; (Or any of their actually official film clips for that matter!) To prove the absolutely crazy chaotic mind as video form from Spirituality And Distortion look no further than the first clip Igorrrr released for song number three on the album “Very Noise”. This very short track is fucking nuts just like the obscure and WTF CGI visual video portrayal. You need to see it!

“Hollow Tree” is an early easily digestible haunting interlude featuring a harpsichord backed by a hypnotic straight-up drum beat and Laure singing and screaming at her absolute Diamanda Galás channelled best. Then follows the fucking magnificent “Camel Dancefloor”. If ever there was a song that could ease you into the genre-redefining Igorrr then “Camel Dancefloor” will be your best friend. This is Igorrr for the rave minded readers out there. Hypnotic and heavy with poise and discordance. “Camel Dancefloor” never strays from the middle eastern drum n’ bass rails it is firmly planted upon.

The last track I am going to review for Igorrrr’s incredible 2020 album known as Spirituality And Distortion is the song “Parpaing” featuring George “CORPSEGRINDER” Fisher who is the vocalist (for those that have been relaxing in COVID-19 insolation for the last 24 years) of Cannibal Corpse. “Parpaing” from the outset pulls no punches and is nothing but groove-driven death metal. Where it becomes true to Igorrr form featuring “Corpsegrinder” is at the one minute thirty mark and from brutal death metal spawn to 8bit SNES game soundtrack. Gautier is an absolute master at this ability to incorporate 80’s and 90’s gaming retro sounds into his plethora of music. If you don’t believe me at exactly 1 min 30 secs on the album version or 1 min 40 secs on the film clip (which you absolutely need to see!) watch how “Corpsegrinder” transforms from a beast in the vocal booth to 8bit Nintendo inspired building smashing super beast with the accompanying soundtrack of destruction authored and crafted by Gautier Serre. “Parpaing” fucking rules, just like the entire back and yet to be created catalogue of Igorrr.

Where the first half of Spirituality And Distortion presents an expressive open-world coloured canvas the second half grabs you by the ears and pulls you into the image laid before you and demands your most brutal and honest melancholic self to open yourself to manipulation, introspection and immerse yourself in the full creative excellence that is Gautier Serre, alternatively known as Igorrr.

Four months into 2020 and best release this year so far easily. Spirituality And Distortion is the musical journey you have to take that didn’t realise you needed to.