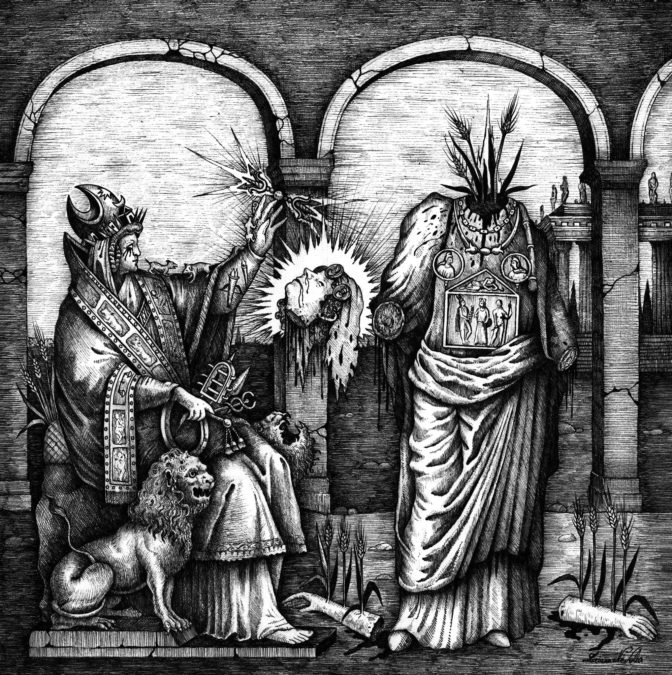 After a prolonged journey to get to this stage, Brisbane thrash outfit Odius are finally ready to unleash their monster EP Ignorance Paid In Violence this weekend with a launch party at the Brightside in Brisbane on April 16.

Vocalist/guitarist Lucas Blackburn and guitarist Sam Faggioni sat down with HEAVY during the week to detail the journey and the finished result.

“It’s like new school riffs with an old school vibe,” Faggioni said of the sound of the E.P. “Obviously everybody loves the 80s, 90s rawness and aggressive shit. Those guys are still playing and we’re still paying to see it. We wanted to capture that without sounding like ‘oh yeah, Odius is a local version or a less good version of this band’. Odius is always going to sound like Odius and maintain the rawness and the harshness of the older stuff but also having learnt from the present so we have that new school vibe covered too. It’s also a culmination of both of our writing as well. Out of all the songs we have, with the ones on the album, there’s a little bit of my stuff and there’s a little bit of Lucas’ stuff and there’s a bit of stuff that we worked on together. It’s more of a relationship and culmination.”

Odius began in Cairns, Far North Queensland over a decade ago, with more than half of the songs on the five-track EP being from earlier incarnations of the band. Two of the songs are written by the current line-up, with Blackburn admitting the difference between the old songs and the new ones is obvious to his ears.

“I definitely can,” he nodded.  “The old songs are about 6 years old, which are “R.T.S.M.K”, “Prophet of Extinction” and “John Doe”, and I have been playing those for years. With the new line up it’s added a bit of spice and new things that I didn’t have in the older versions.”

“I think it’s…,” Faggioni measured, “from a musicians point of view and a guitarists point of view all of the stuff I was learning before I joined the band was sick but every project I was involved with before this I was the primary writer. I enjoyed the music that Lucas had and I enjoyed the way he had written the songs. When you have so many songs from someone you can almost jump in their shoes a bit from an artists point of view. I really liked the songwriting. They are good riffs.”

In the full interview, the boys talk about tonight’s EP launch and what to expect, their new merchandise, the journey to releasing Ignorance Paid In Violence, the move for Lucas from Cairns to Brisbane and basically starting from scratch, the bands origins in thrash metal and finding their own niche and more.