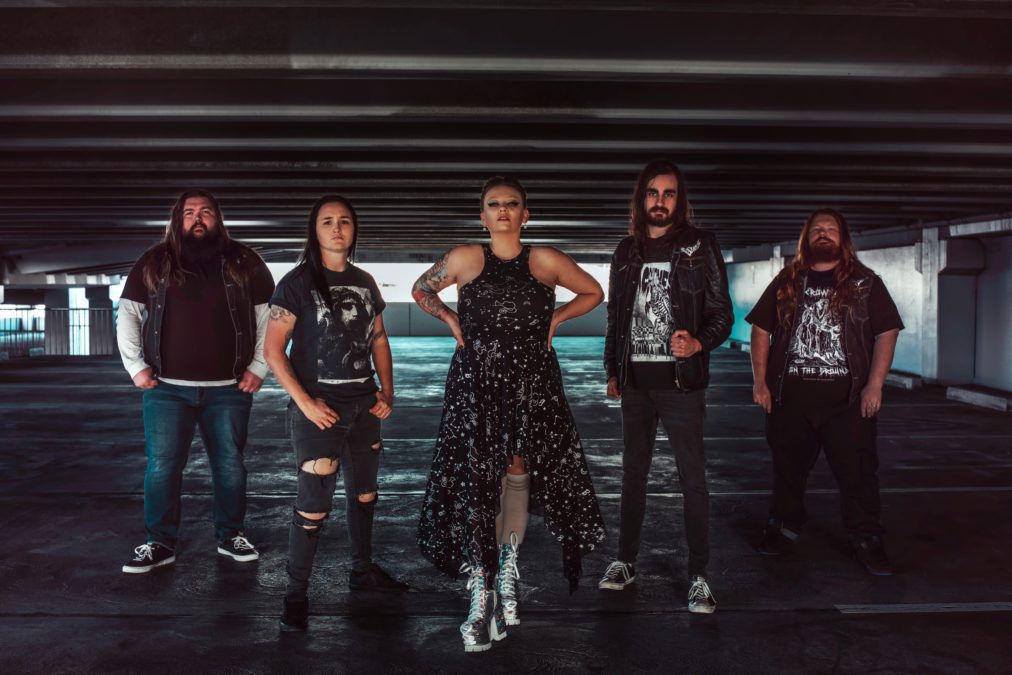 Following the recent release of their latest single Secret Keeper, Perth melodic metal outfit Icarus Lives sat down to answer a few questions and take us further behind their music.

HEAVY: What’s your name and position in the band?

Icarus Lives: My name is Aria Scarlett (She / Her) and I am the Lead Vocalist for Icarus Lives.

Which genre(s) do you feel best represents your band?

I’m not the biggest fan of putting genre boundaries on our music, or any music. I love how collaborative and cross genre Icarus Lives is. We play with metal, opera, folk, rock and cinematic soundscapes – how fun is that?! For ease, you’ll hear the term melodic metal when referring to our music.

What was your favourite thing about writing, recording and filming the latest release?

Honestly, being a part of a team! Everything I created up until this point was a solo effort, which, while super fulfilling, can be quite lonely. Every member of Icarus Lives, is a vibrant creative person and it was so invigorating to have these minds to bounce ideas off of.

Gosh, we are about to have so much luggage! Touring as a solo singer is as simple as a humidifier and a USB full of your tracks…I imagine a band will be much more complicated. My favourite part about touring has always been the people you get the privilege meeting and performing for and I’m excited to see all the awesome faces who come out for Icarus Lives.

In an alternate universe where you are not a musician, what kind of activities would you be interested in?

I’ve always wanted to be on stage, in whatever capacity that would take me, something about me has always been egged on by applause and I’ve sought it out in whatever form it came. Whether it was playing Augustus Gloop in a school play or forcing my brothers to join me in choreographed routines in the backyard, performing came naturally to me. I never questioned for a moment that I’d be in front of an audience, I just had to figure out what on earth I’d do for them… If it wasn’t as a musician, I’m sure the diva would have reared her head in some other capacity.

I initially played the violin in primary school; badly might I add. I’m convinced I was the reason the teacher quit and I was told by the school that I needed to pick a new instrument to study. I was too lazy to continue carting a music case to and from school every day so I chose singing. Fate or laziness, either way it was the beginning of my journey as a vocalist.

The short answer is no. Once I knew I wanted to study music in all its capacities, I was denied opportunities to learn music theory within school and in high school. I had to seek out external teachers to bridge the gap in my knowledge. I didn’t take an official theory class until university and struggled every day of the five years I spent there trying to make up ground, surrounded by people who spoke music theory as a second language.

I worked really hard and never failed a class, for that I have to thank my family. In school it was my dad, who found a teacher that aligned with my goals and mum who would pick me up from class early before making the dash to my private lessons (snack at the ready). Once I hit university, my boyfriend at the time (now husband) would make sure my car was full of fuel and coffee money was sneakily left in my wallet. These gestures allowed me to focus solely on my learning, I have been incredibly well supported.

Institutions don’t catch everyone and I was fortunate for the people who still allowed me to pursue singing, I wouldn’t be where I am without them.

I love a good breathing exercise and affirmation. I have to take a moment to switch into the character who goes on stage and I find a quite moment helps with that a lot. Quite and backstage don’t necessarily go hand in hand so don’t be surprised if you find me in the lane way behind the venue or the closest carpark doing breathwork and vocal warmups.

During the pandemic (here I was, hoping I wouldn’t mention it during this interview) we found that we needed to invest in local arts more. This of course is something the industry already knew, but it finally hit everyone else. I’m excited to see us continue to support local talent and hope that this isn’t a dying trend.

We have so much incredible music coming your way! You can stream Secret Keeper on your favourite streaming service right now. Scorched Reprise, our new EP drops on April 22 and you can be sure that means some killer shows will be announced soon. Make sure you follow Icarus Lives on social media so don’t miss out!