“HYMNS TO THE DEAD” BLASPHEMY, PORTAL, BATUSHKA, NUMENOREAN and SPIRE at The Odeon Theatre, Hobart on 20/6/18 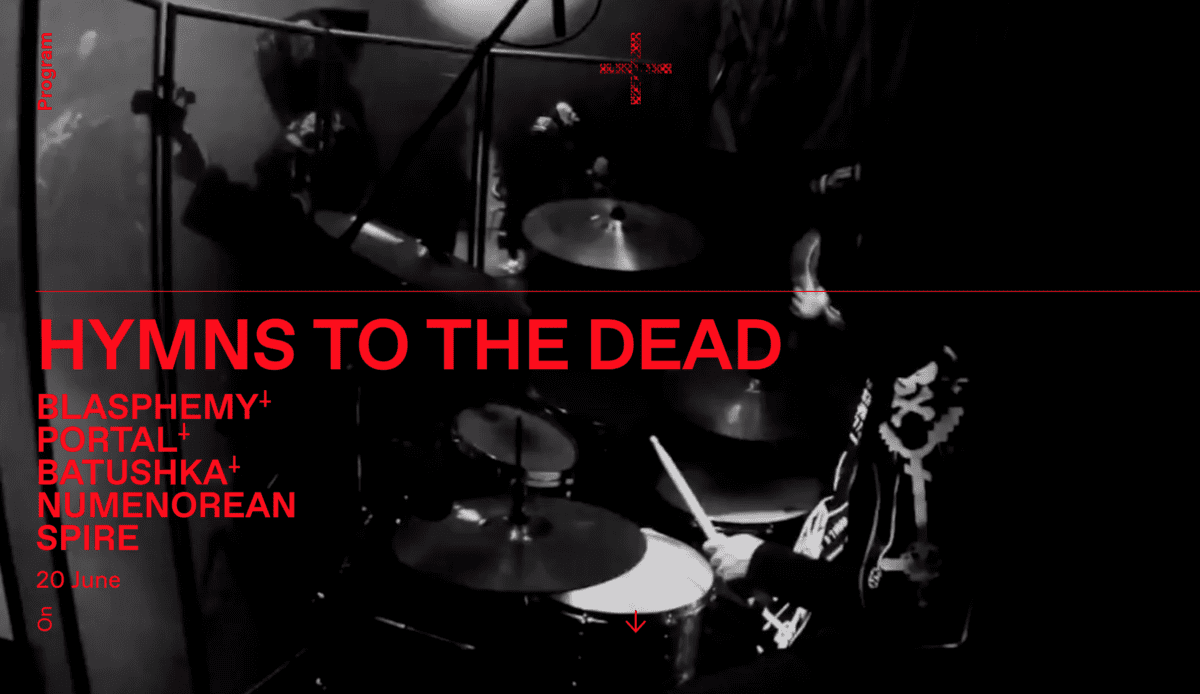 Game Of Thrones may have the mantra of “Winter Is Coming”, but for countless heavy music aficionados it had well and truly arrived in Hobart, Tasmania for the Dark Mofo festival. The Odeon Theatre provided the sanctuary from near frost-bite, however within these classical walls five world-class metal bands from different corners of the globe were to perform the iconic “Hymns To The Dead” showcase and this was to be more astonishing than any white walker.

A heavily cloaked five-piece took to the stage escalating the bleak and gloomy aura already embodied in the theatre; first to address the audience was Brisbane’s Spire.

Spire and their ambient black metal formula was to transport the crowd into a murky, grim abyss of despair in an absolutely astonishing fashion. Featuring songs from mostly their astounding debut album Entropy, the five-piece pummelled every observer in the room with what could be compared to as a musical volcano eruption. A rumbling earthquake provided by above human percussion, a building tension administered by the ambient guitars and the eruption delivered by the throat-shredding roar and squawk – it was nearly threatening, in a brilliant construct. The subtle use of Gregorian chants used in the formula added another dimension and somewhat calming effect comparably; it was fair judgement that the Odeon theatre had undergone its initiation for Hymns to the dead.

Canada’s Numenorean followed without costumed attire and a far more animated delivery of their blackgaze / post black metal recipe which fascinated those fortunate to observe the performance. Undertaking a more intimate approach with the five members staying close-knit to one another, the intensity of their show was enhanced immeasurably. Playing the majority of their first LP Home, “Devour” was the highlight, a journey of intricacy, austere lyrical questioning and doom post blackened metal, it inspired numerous band members to scream their lungs out, even offstage and without their instrument. This was a bewildering hymn to add to the event.

The stage was transformed into a completely new world for Poland’s Batushka. A perspex drum cage, dozens of candles, a blanketed pulpit, a human skull and a framed picture of their record cover Litourgiya decorated the elevated platform and an extensive introduction begun what was not a musical production, but a ceremony. After every member took to their respected positions, the sermon or ritual commenced and it was awe-inspiring. Theatrical does not begin to properly describe the commemorative service Batushka displays, it is beyond that. The liturgical chant is mesmerising, the screeches are all encompassing and the address the Polish outfit transmits amongst a black metal emanation is enrapturing, spiritual and soul enlightening yet darkening in unison. This event was above memorable, it was truthfully historical.

Brisbane’s best extreme metal export Portal made their presence known instantaneously, appearing on stage in what could be described as a deranged leader similar to, but vastly different to a nightmare-ish shredder with his foot clan (teenage mutant ninja turtles). This enactment was erratic, dysfunctional and delectable all in an unhinged excellent manner. The technicality was extravagant yet menacing, proportionate to the soundtrack of a salt water crocodile’s hunting protocol. For those who were able to witness the act, “disturbed” was far from accurate, “motivated” was the general attitude as numerous crowd surfers climbed to new heights attempting to get closer to the Queensland blackened death metal virtuosos. The delightful nightmare however, was far from over.

Long serving Canadian blackened war metal veterans Blasphemy were invited to conclude the hymns to the dead and were adamant on doing so guns blazing. This five-piece are true veterans of the genre, with a mixed but lengthy career spanning over three decades, it was more than comprehensible that those within the Odeon theatre were going to appreciate this iconic moment to the highest degree. There was an understandable luminary semblance around the quintet and it honestly heightened the thrash blasts of tracks “Desecration” and “Demoniac”. The execution of the song “Ritual” in the encore was above exemplary, especially with the marching effect portrayed in its delivery.

Whilst this event’s name does suggest a musical tribute to the deceased, it would be a flawless affirmation to suggest that the dead are definitely pleased with what was put forth in 2018.

PrevPrevious.HOLLYWOOD VAMPIRES at the Manchester Arena, Manchester on 17/6/18
Next.ELECTRIC WIZARD at The Odeon Theatre, Hobart on Thursday 21/6/2018Next