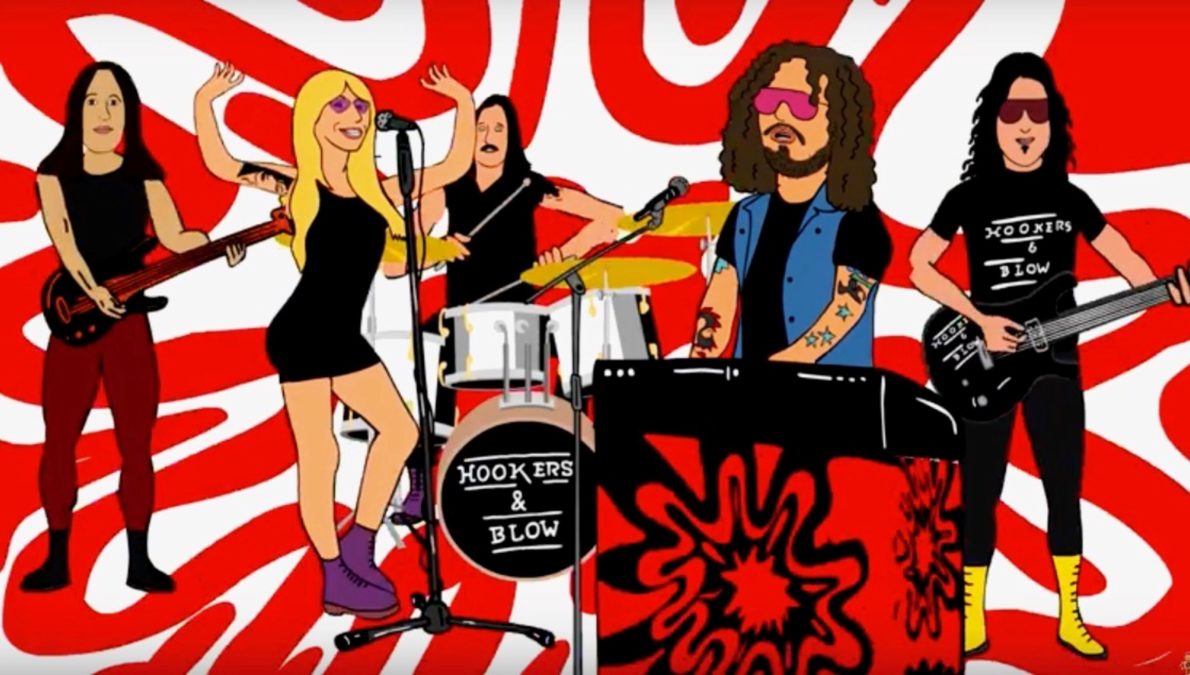 Taking eighteen years to release your first album defied every convention and protocol in the rock and roll handbook.

To most bands, that would be akin to career suicide, but Hookers & Blow aren’t like most other bands.

Correction, ANY other bands.

Originally formed in 2003 by Dizzy Reed (Guns ‘N Roses) and Alex Grossi (Quiet Riot) as an excuse to get free alcohol on the famed Hollywood Strip, Hookers & Blow have remained true to their core beliefs for almost two decades, plying their trade in the heart of rock between other commitments and roping in some of the biggest names in rock for impromptu and planned live performances.

After teasing long-suffering fans with a succession of single release, Hookers & Blow recently dropped their debut self-titled album with little fanfare, preferring to once again let the music speak for itself.

The fact the entire album is made up of covers is yet another slap in the face of convention, with guitarist Grossi simplifying things somewhat.

“That’s all we’ve ever done is covers,” he shrugged. “We’ve never written a song in this band, and we don’t really plan to. We also didn’t plan on making a record so… you never know what could happen down the road.”

Featuring an eclectic assortment of artists to cover – including Led Zeppelin, The Rolling Stones, Body Count, David Bowie, The Beastie Boys and Elton John – the album sees Hookers & Blow put their own slant on proceedings without bastardising the originals completely. When it came time to select which songs were covered on the album, Grossi claims there was no set thought process or agenda, it just came down to what the recording members felt comfortable playing.

“It kind of happened organically,” he stressed. “We all brought a few suggestions in and made a list and banged them out at rehearsal one day then made another short list and that was it.”

With the well earnt reputations within music of just the two founding members, you wouldn’t think the band would have had trouble convincing some of the artists covered to provide guest tracking on the songs, but Grossi says that option was never really considered.

“Not really,” he explained. “It’s a slippery slope, you know. Getting the approval from some of the guys was good enough for me. You’d be surprised, a lot of these guys… we didn’t have a huge budget for this thing so we’re not gonna blow the budget to get someone to sing a couple of lines.”

In the full interview, Alex talks about taking creative liberties with some of the tunes, how difficult it is to take someone else’s song and make it your own, the early days of the band and why they formed, the logistics of playing in multiple bands, the possibility of Hookers & Blow coming to Australia and more.