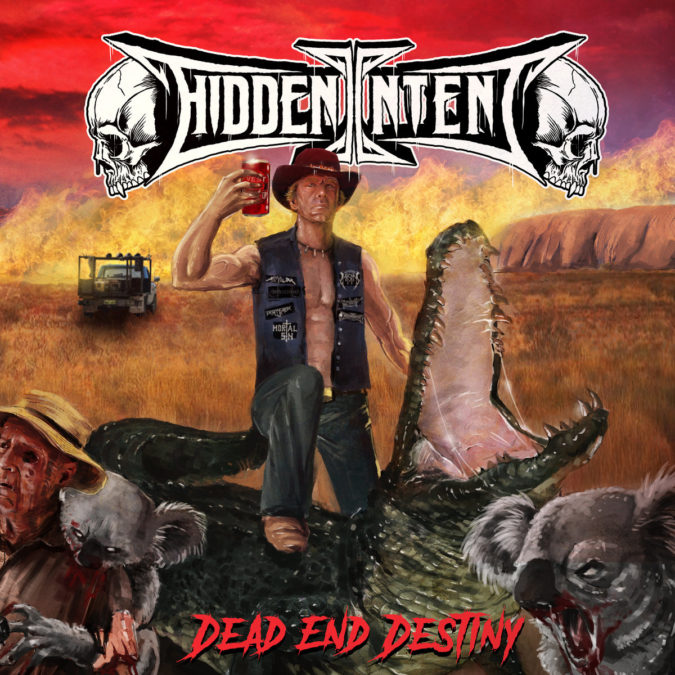 Hidden Intent’s latest album Dead End Destiny is a return to the thrash roots that so many bands try to emulate but few manage to pull off effectively.

With all of the sub-genres emerging these days it is easy for bands to get lost in a myriad of sounds and labels – with many succumbing to the temptation – but for me the purest form of the term is generally the best.

Hidden Intent proudly displays eight original tunes on Dead End Destiny, each breathing fire and life of their own in what is ultimately a thrash album of insane proportions.

Opening with “A Place of Horror” the band dives headlong into the carnage with a sonic burst of metal that sets you on your haunches from the outset. It is a fast-paced, frenetic display of musicianship, punctuated by a brief pause before vocalist/bass player  McThrashewen calls the band to arms with a bellowing ‘Go!” and the carnage reconvenes.

“Breaking Point” delivers more of the same, opening with dualling guitars and double kicks forcing your head to subconsciously rock back and forth before gathering momentum to a full headbang without even realizing. It is another supercharged offering from Hidden Intent before tapering off towards the end with an almost flamenco-style guitar interlude that fades to the end, beautifully showcasing the contrast between aggression and beauty while still maintaining an intense rage.

As too “We Are The End Of Us”, one of my personal favourites on the album, a slower, more deliberate sounding tune that chugs along in a slow-burning fashion that proves heaviness isn’t all about speed and bravado. The song builds into a crescendo of wailing guitars before the acoustic, flamenco-style playing emerges to take us to the song’s completion in a well-crafted song that hints at the expanse possible in Hidden Intent’s future.

“Pub Feed” epitomizes everything that is Australian with Hidden Intent, proudly pleading “All I want, all I need, all I crave is a good pub feed”. It is the most rock-orientated song on the album and is a mess of groove-laden rock that hints at yet another side of the band’s musical psyche. The drum outro is strikingly familiar, possibly alluding to what is to come but more about that later.

“Get A Dog Up Ya” is two minutes of pure ferocity while “Forgotten Fate” showcases drummer Paul Lewis at his best in a drum-driven number of thunderous proportions.

As if to prove their thrash mettle, Hidden Intent have a surprise bonus track from none other than thrash titans Slayer, with a blistering rendition of “Altar of Sacrifice” leaving you breathless yet still wanting more.

Dare I say it, Aussie bands are leading the thrash revival musically at the moment, and Dead End Destiny is the current leader of the pack.

Watch “A Place of Horror” below: