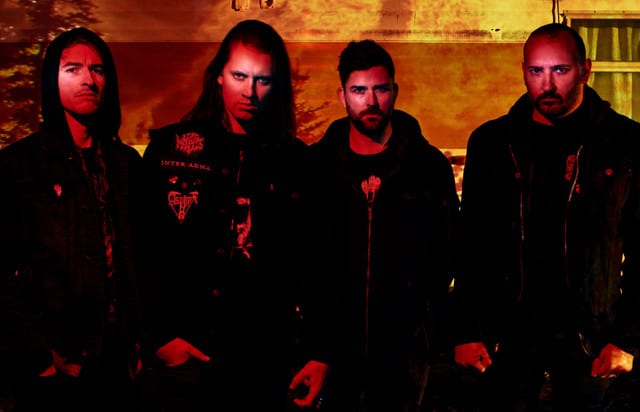 Vestigial is the impending third full-length from Sydney Australia-based post-metal/sludge faction LO!.
Set for release via Pelagic Records October 6 the songs comprising Vestigial are truly next level.
Well-crafted with a larger scope both musically and thematically than previous outings the band is simply tighter than ever before
boasting a sound that’s seismically heavy yet organic with a mammoth harmonic density behind their stupefying heavy riffs.
US site Treble praises Glutton as a “meaty, melodic, yet pummeling burst of roaring metal that recalls the likes of Neurosis, Isis and their labelmates The Ocean.
Like those bands, it features some impressive dynamics, transitioning from a full-throated assault into a moody, even pretty instrumental section that showcases the full range of the band’s talents.”

“Lo! have come to remind you of glorious times, times when Mastodon were using samples of Jurassic Park to kick off their records”, Metal Hammer (UK) wrote about the band’s debut album LOOK AND BEHOLD.
And in fact, song titles like MEGAFAUNA or HALL OF EXTINCT MAMMALS show that Lo! have always been interested in man’s relationship with the natural world.
Themes of extinction, circuses and animal exploitation were explored on the band’s 2015 EP THE TONGUELESS —
“…so it was a nice lead in to where we are at now on VESTIGIAL, with a revisit of the outro from the EP as the intro on Album 3”, vocalist Sam Dillon comments.

A world where politics resemble black comedies, where guns have become an aspect of culture and where addiction to technology is the norm is at the lyrical heart of VESTIGIAL.
“There are several repeated characters throughout the album; the JUDAS STEER, the LOCUST CHRIST… these are anti heroes, the wolves among sheep figuratively.
The ghastly Donald Trumps, The Kim Jong-Un’s, the extremists and ignorant tyrants of our modern lives”, comments Dillon.