…when it comes to hip-hop, which let’s face it nowadays has lack of guitars? Artists such as Public Enemy, Cypress Hill, Run DMC and Beastie Boys all combined real instruments in their sound. Members of two of the aforementioned outfits have joined forces with the funk metal of Rage Against the Machine to create a rap metal fusion, evolving into one beast of Godzilla proportions.

Prophets of Rage was the result…

First, we will take a look at the roots of the supergroup, focusing on the groups who make up the backbone. So sit back and soak up the sounds of music with a message, something the world needs right now!

HEAVY spoke with the mighty Tom Morello
in this interview. CHECK IT OUT!

Well known for their revolutionary political views, the talented group of musicians formed in California in 1991 after the demise of guitarist Tom Morello‘s previous band Lock Up, not to be mistaken with the grind group Lock-Up who will be supporting their peers, Napalm Death this October. Former Lock Up drummer, Jon Knox got bassist Tim Commerford and rapper Zack de la Rocha together as he was looking to start a new group. Morello recruited Tim Wilk who had missed out on tryouts to become the drummer for Lock Up. Named after a song de la Rocha had written for his former hardcore punk band, Inside Out, Rage Against The Machine was born and the rest was history. 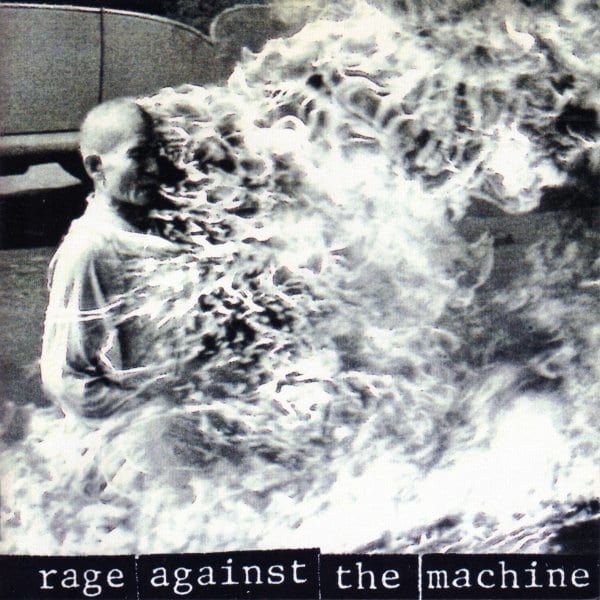 The album’s cover featured Malcolm Browne‘s Pulitzer Prize-winning photograph of Thích Quảng Đức, a Vietnamese Buddhist monk, burning himself to death in Saigon in 1963 in protest of the murder of Buddhists by the US-backed Prime Minister Ngô Đình Diệm’s regime.

Signed to Epic Records, the self-titled debut was released and reached triple platinum, thanks to the airplay and heavy rotation of the anthemic, “Killing in the Name of” The album was produced by Garth Richardson who had worked with the likes of Red Hot Chilli Peppers on Mothers Milk (1989) and other seminal artists and was recorded in California at Sound City, Van Nuys, Scream Studios, Studio City and Industrial Recording, North Hollywood. 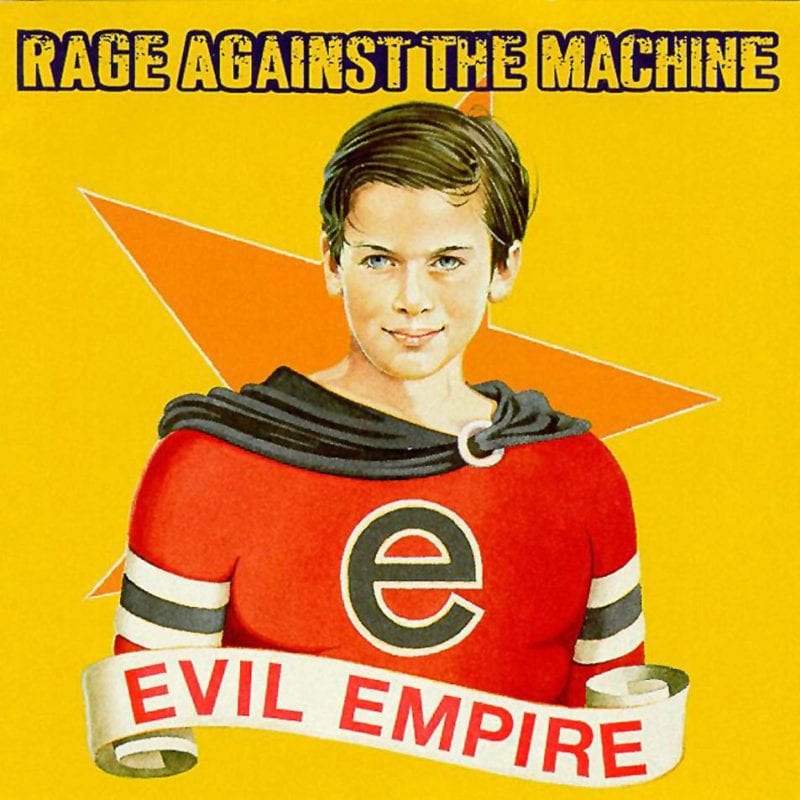 The album art on the cover is an alteration of an image by Mel Ramos and features Ari Meisel as the subject. The letter “e” on the boy’s costume was originally a “C” for Crime Buster.

After the Rage Against the Machine Tour ended in December 1993 a much-needed break was taken in which RATM worked on the follow-up to the classic debut. The “evil empire” was the name given to describe the Soviet Union by former president Ronald Reagan, in which the title for the second release seemed most fitting. The album also reached triple platinum, much like its predecessor. Gaining the number one spot on the Billboard 200 chart, the track, “Tire Me” won a Grammy Award for the Best Metal Performance. The tracks “Bulls on Parade” and “People of the Sun” were also both nominated for Best Hard Rock Performances.

The album was produced by Brendan O’Brien, who has worked with a diverse range of artists from Pearl Jam, Soundgarden, Stone Temple Pilots to Korn, AC/DC, The Offspring, Bruce Springsteen, and The Black Crowes.

The release was recorded at Cole Rehearsal Studios, Los Angeles, California. The final song on the record “The Year of the Boomerang” featured in the John Singleton film, Higher Learning (1995). Sadly this would be the second last recording of original material as one final album and a record of covers was on the horizon. 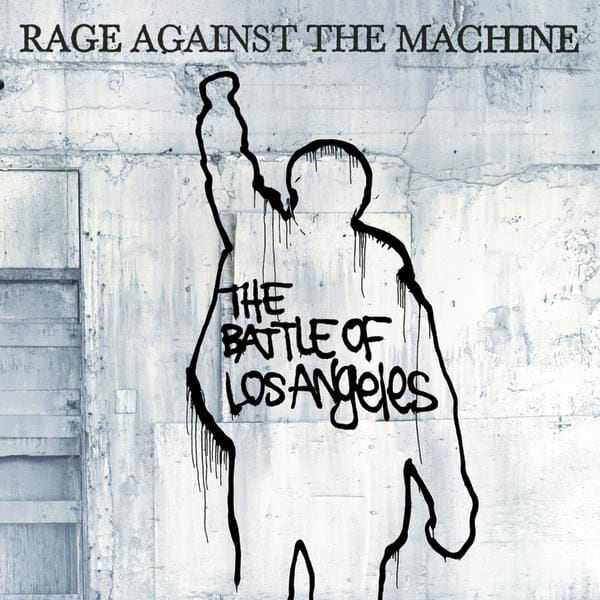 The third and final release of original material was released three years after Evil Empire. Brendan O’Brien once again took up production duties and the album was nominated for Best Rock Album at the 2001 Grammys. Both Time and Rolling Stone named it the Best Album of 1999. Notably taking the number one spot on the Billboard Top 200, forcing Mariah Carey to take the second spot. Now, that’s an achievement in itself.

Controversial for his documentaries, Michael Moore produced both “Sleep Now in the Fire” and “Testify”

“No Shelter” featured on the soundtrack for Godzilla (1998) and was also a bonus track. 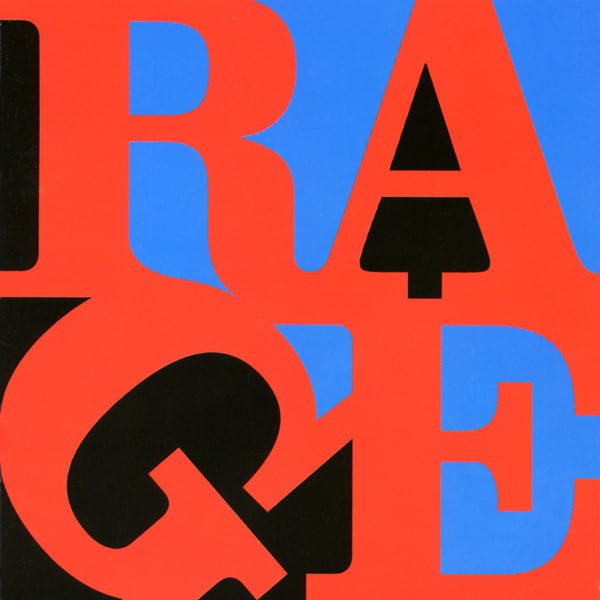 The album’s cover art is a parody of the pop art work LOVE by Robert Indiana, with the words “LOVE” replaced with “RAGE”. The artwork ends with a photograph of an American one dollar bill with the message “YOU ARE NOT A SLAVE” written on the back.

The fourth and final recording for RATM was produced by both Brenden O’Brien and Rick Rubin, the man responsible for material from Beastie Boys to Slayer. The album was recorded once again in California at Cello Studios, Hollywood, and The Village Recorder, Los Angeles.

Although the album consists of covers all are given that classic funk metal spin, making every track their own, sounding nothing like the originals. Not many bands could pull that off without trying to replicate the original.
Everyone from Bruce Springsteen to influential acts such as Minor Threat, MC5, hip-hop artists Eric B. & Rakim are covered with an amazing rendition of “Microphone Fiend” and Cypress Hill‘s “How I Could Just Kill A Man”

Released after de la Rocha left the band it would sadly be the last time the band would record in the studio together. RATM split on 2000 with a number of Reunion Tours. Wilk stated that Rage Against the Machine’s 2011 performance at L.A. Rising may have been their final show.

The aftermath of Rage Against The Machine

Remaining members Morello, Wilk, and Commerford joined with the late, Chris Cornell (Soundgarden, Temple of The Dog) forming the supergroup Audioslave, releasing three records, Audioslave (2002), Out of Exile (2005) and Revelations (2006)

The band split in 2007, despite a number of reunion shows and supported Prophets of Rage at the Anti-Inaugural Ball, protesting President Donald Trump‘s inauguration, which took place on January 20, 2017. Sadly Cornell’s passing in May, only a few months after the gig, would be the final time we would get to see Audioslave on stage.

We will remember the music and those lucky enough to have witnessed them would be blessed as it surely was one night never to forget.

Guitarist Morello started a solo project which gave light of his political reviews with his first two releases One Man Revolution (2007) and The Fabled City (2008) out via Epic Records and the second two, Union Town (2011) and World Wide Rebel Songs, also released the same year, both on New West Records.

De La Rocha, on the other hand, joined forces with Jon Theodore, current drummer for Queens of the Stone Age and formerly of The Mars Volta. Joey Karam, the vocalist for the hardcore straight-edge group, Resist provided keyboards and organ on this occasion. The group was also one sight to be witnessed live as they tore the roof off at the now defunct Soundwave Festival in 2011.

Cypress Hill was the first Latino American hip-hop group to reach platinum and multi-platinum sales of over 18 million albums worldwide. Representing rap of the West Coast the band is advocates for the use of cannabis for meditational and recreational purposes in the United States. The self-titled debut in 1991 featured standout tracks such as “Real Estate”, “The Phuncky Feel One”,  “Hand on the Pump” and  “How I Could Just Kill a Man”, a song which was covered by RATM on Renegades (1999).

The follow-up Black Sunday (1993) featured songs which really got the band recognition, These songs included “We Aint Goin’ Out Like That” and “Insane in the Brain”

Another six records were released since then with their most recent, Rise Up (2010) featuring guests which included Morello, Daron Malakian (System of a Down), Mike Shinoda (Linkin Park) and Everlast, to name a few.

What RATM was for music with a message within rap metal, Public Enemy was that and more for the Hip-Hop community. Starting in Long Island, New York it wasn’t long before the group released their debut LP release Yo! Bum Rush the Show (1987) Consisting of Chuck D (Carlton D. Ridenhour) – MC Flavor Flav (William Drayton), who shared lead vocals, guitarist Khari Wynn and DJ Lord (Lord Aswod), who replaced Terminator X in 1998, P.E. was one group to look out for, The landmark albums to follow included It Takes a Nation of Millions to Hold Us Back (1988), Fear of a Black Planet (1990) and Apocalypse 91… The Enemy Strikes Black (1991).

Since then eleven records have been released, which included the soundtrack for the Spike Lee film, He Got Game (1998) amd the most recent,  Nothing Is Quick in the Desert (2017). It is no wonder Publice Enemy have joined the fusion of Prophets of Rage, as they were a strong influence on the music of Rage Against The Machine.

The main focus here is what is happening right now with Prophets of Rage, the new and exciting supergroup of sorts which consists of three members of Rage Against the Machine and Audioslave (bassist and backing vocalist Commerford, guitarist Morello, and drummer Wilk), two members of Public Enemy (DJ Lord and rapper Chuck D), and rapper B-Real of Cypress Hill.

The group has released their debut EP, The Party’s Over (2016) and are set to release their first full-length studio recording, which is to be self-titled. The following track below is what to expect. Believe the hype! The time is now, so get your Rage on! 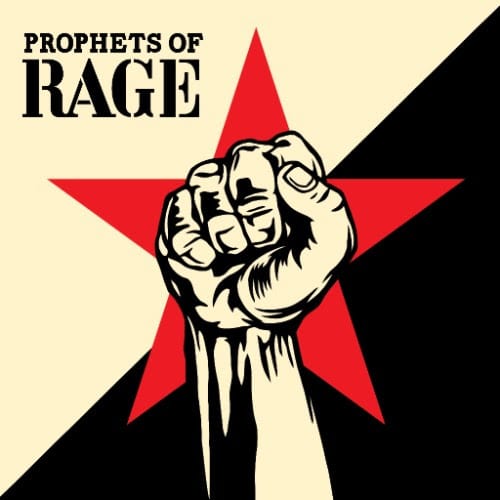 HEAVY spoke with the mighty Tom Morello
in this interview. CHECK IT OUT!