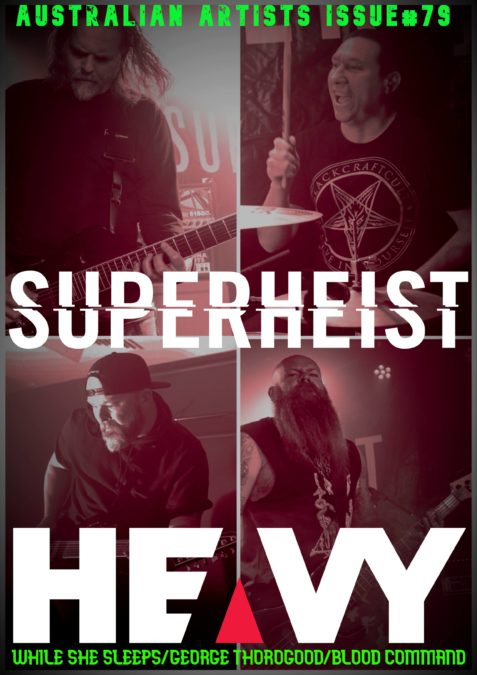 Now matter how good metal is, it still can’t warm you up in the cold!

I have just arrived in Melbourne for a few weekend shows and believe me, if I could type wearing gloves these two typing fingers would be well and truly covered!

Aussie rap/metal/rock/punk hybrid outfit Superheist have been a little quiet of late, but that’s about to change with first the release of their new track Medicated on June 10, followed closely by their latest album MMXX which is set to land on July 1.

We caught up with founding member and guitarist dw Norton this week for a chat that was so good we just had to put it on the cover!

While She Sleeps, Blood Command (featuring our very own Nikki Brumen formerly of Pagan) and the legendary George Thorogood all gave up their time this week and we bring you every word from their collective mouths.

Our review team give you the verdict on the new albums from Crobot, DAMPF and Decapitated, while HEAVY Cinema brings you all the news and reviews from the land of Hollywood.

Aside from the cold it’s a great time to be alive. Get out and see a gig or just stay home and listen to your favourite new bands, but whatever you do, remember to stay HEAVY