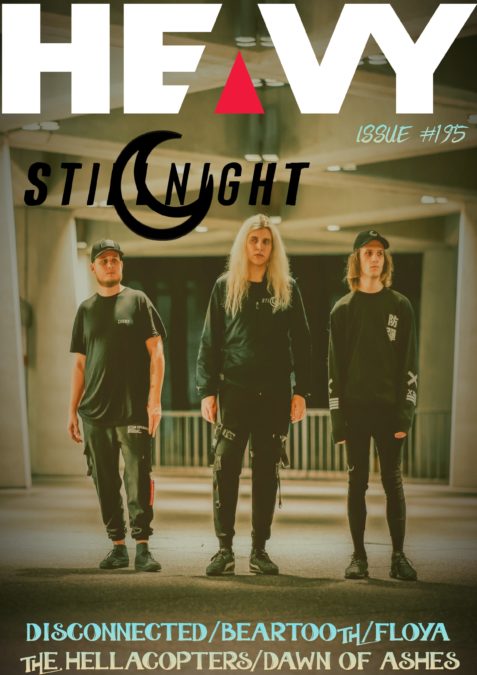 HEAVY isn’t about just giving exposure to established bands who have an existing fan base. We also try to identify emerging talent and, where possible, reward such bands with featured interviews and the occasional cover story where possible.

It gives us great pleasure this week to introduce you to Stillnight, a fresh post metalcore band from the Western Coast of the United States who are dropping their killer debut album Dream State on March 25. Vocalist Danny Sullivan sat down with HEAVY during the week to talk about the band and their music, and we were highly impressed by what he had to say!

We also speak with Disconnected, The Hellacopters and Floya about their new music, and we delve into the musical career of Jack White with the fourth instalment of our new Metal Mistress series.

There’s enough new music for you this week to make a substantial playlist, so if you are so inclined, throw some or all of these onto rotation. We bring you new music from Kingsmen, Northlane, thrown, Bad Wolves, Exodus, Apocolyptica, Talas, UDO Dirkschneider, UMFU, Conquer Divide, Cradle Of Filth, Agathodaimon, Van Canto, Marianas Rest, Danny Elfman & Trent Reznor, The Pulse-Escape Method, Blind Guardian, Them Evils, S.A.M and Battle Beast, as well as news about the upcoming tour from The Dead Daisies, Joshua Travis‘ EP and Inglorious‘ incoming live album.

We review the upcoming debut album from The Violent Inzident and also have a listen to the new Deluxe Edition of Below from Beartooth and the new album from Dawn Of Ashes.

HEAVY Cinema has all the usual features, with interviews, reviews and trailers from some of the newest and most spectacular offerings from Hollywood.

If you are in Brisbane or the Sunshine Coast, come down and say happy birthday to HEAVY on Friday night when we host our Sunny Coast party for HEAVY’s 10th birthday at 11 Dive Bar, but if not get out and support any local bands and raise a glass for metal.