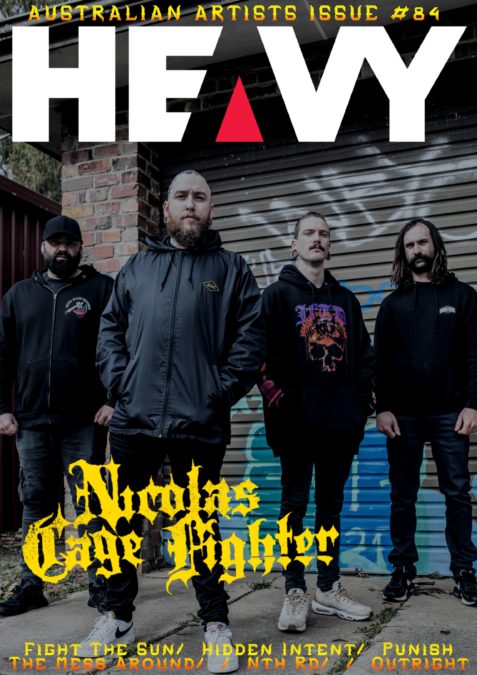 The abundance of talent within the Australian music scene at the moment is sensational. Even someone like my good self who lives and breathes music pretty much 24/7 is being ambushed by a wealth of new and established bands that had somehow managed to slip under my radar.

This week I discovered Nicolas Cage Fighter and if you are also yet to be sonically assaulted by these rapidly rising hardcore future superstars then I suggest you wander over to whatever music plpatform you frequent and get acquainted.

The band dropped their wicked new album The Bones That Grew From Pain today and I have had it flat out on repeat ever since. No wonder the neighbours hate me.

Anyway, that’s enough to earn NCF the cover of this week’s DigiMag, but they weren’t alone when it came to quality releases this week.

We also catch up with South Australian thrash machines Hidden Intent, Nth Rd, The Mess Around and Fight The Sun who all have new songs out, plus we also chat with Xibalba ahead of their Aussie run of shows next month.

We were fortunate enough to premiere some great new songs as well this week, with Remission, As A Rival, The Mess Around and Hidden Intent all honouring HEAVY by choosing to allow us to premiere the toils of their dedication.

On the singles front we have the new tracks from The Poor, Outright, Our Last Enemy, The Overcoming Project, Slaves Of Dissonance and Tied Down and on the touring front we bring you details of upcoming shows from Thy Art Is Murder, Ash, Airbourne and Frankie and the Witch Fingers PLUS we bring you the latest news on this Sunday’s Gold Coast birthday celebrations for HEAVY at Mo’s Desert Clubhouse.

Our review team has their verdict on the new albums from Outright, Punish and ibvs and if you are still with us after all of that HEAVY Cinema brings you a complete wrap up of life in the Hollywood lane.

If you’re in or around the Gold Coast this weekend, come down to Mo’s and say hello. There’s some great bands playing like From Crisis To Collapse, Minds End, Goatzilla, We The Hollow and Void Matter and if you can track me down I might even buy you a Fireball!