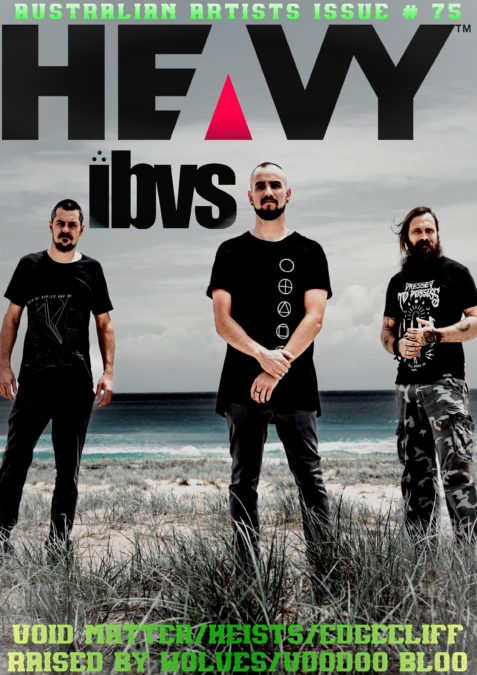 One of the things I love most about Aussie music is the consistency we seem to churn out awesome bands.

Take, for example, this week’s cover band IBVS. These Gold Coast masters of metal haven’t even released their first EP yet, but already you can hear that they are going to be something special. Don’t believe me? As if I give a shit… And take it up with Jimmy Glinster who broke his interview cherry on this one.

Speaking of breaking cherries, this week also sees my china plate and nephew Coco Le Sex Bomb embark on his own writing journey with his first ever interview with Kiwi rockers Voodoo Bloo. We also welcome seasoned campaigner CJ Nash from Nash Management, who catches up with rising Brisbane metalcore outfit Void Matter.

We also catch up with Heists and Edgecliff, who both have new music out, and we are proud to premiere the new track from Raised As Wolves.

There’s new music from Werewolves, ATLVS, Sedative and Edgecliff and we bring you all the tour and music news from Halestorm, Vicious Circle, Babirusa, Black Rheno and the new Faith No More Tribute band headed by none other than Lucius Borich from COG, and we tell you how to get hold of a bottle of the new King Parrot Disgrace Yourself Absinthe thanks to our good mates at Groglords.

Our review team brings you their verdict on the new albums from Massic and Sugar Spine, plus we wrap up the recent show featuring The Poor, The Angels, Rose Tattoo and Baby Animals, plus we recount the recent Devilskin Melbourne show and Caligulas Horse live.

If that’s not enough then HEAVY Cinema once more brings you the latest and greatest from Hollywood so get it up ya!

Aussie music, the best in the world…