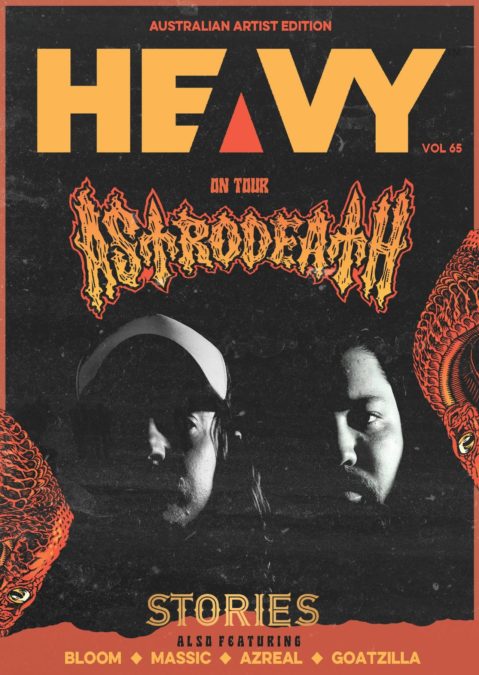 Aussie metal is in a good state at the moment, despite the obvious pitfalls of an industry that was pretty much brought to its knees for two years.

One act that has taken everything in their stride is Sydney sludge/metal outfit Astrodeath who busied themselves writing and recording and with their latest single due out on March 2 frontman Tim Lancken sat down with HEAVY to run over a few things.

We also catch up with Stories, who are coming out of a five-year absence to play a comeback show at UNIFY Forever.

Wallapalooza may have been postponed, but we still had a good chat with local bands Azreal and Massic who spoke about more than just their upcoming (rescheduled) show.

Speaking of Wallapalooza, organisers have already announced the rescheduled date, which you can find in the news section along with set times for Scene & Heard, Groglords outstanding special involving Blackened American Whisky and Metallica, HEAVY’s Sunshine Coast instalment of their birthday celebrations, Rock4Roadies and more.

There’s new music from Echoes In Eternity, Icarus Lives, Larry Leadfoot, Ocean Grove, Luke Seymour, ATLVS and Fangz, plus our review team had a listen to the new EP’s/albums from Kayen Houshmand, Frankenbok and Totally Unicorn and give you their verdicts on them.

HEAVY Cinema brings you all the latest from Hollywood, including interviews, reviews and news on the new Chip N Dale film, Jackass Forever and Unchartered.

Live gigs are starting to become more of a regular thing than a special treat, so remember the times when you were stuck at home and wishing you could go out and actually do it to support our home grown artists.

The scene will thank you for it.