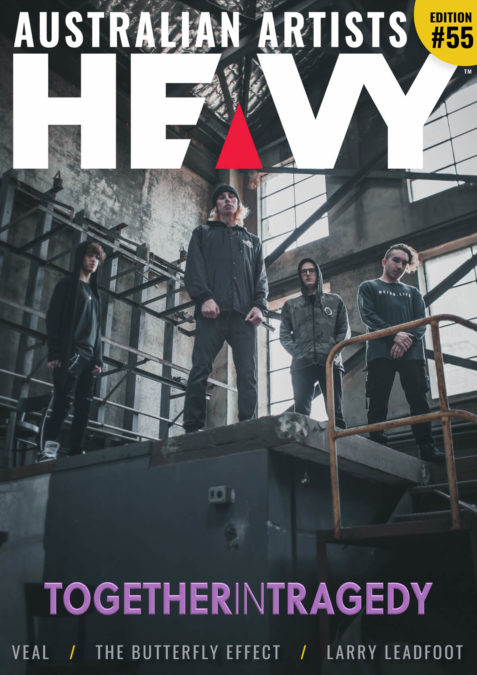 It’s been a bumper week in the Australian hard rock/metal world!

After the recent release of their awesome EP Memoriam, Together in Tragedy have scored this week’s cover and featured interview. We also catch up with Veal ahead of their show this weekend, talk to The Butterfly Effect about their new music and speak with Larry Leadfoot about their new re-issues.

We bring you new music from Raised By Wolves, Fight The Sun, Death By Denim, The Faim, Pridelands, Terra, Saviour, Scrutiny, Wolfmother and The Last Martyr, plus we premiere Larry Leadfoot’s new/old track SWAB.

In the news section we bring you the latest on the upcoming shows by Brisbane Gojira tribute band From Mars To Sirius, the huge special on Uncaged tickets this weekend, next weekend’s Rodfest at The Back Room, new dates for Under The Southern Stars, new festival Monolith and Slowly, Slowly‘s upcoming tour.

Veal have finally released another EP, and we run our sword over that one as well as the recent release from st.sinner and Devil Electric.

There’s gigs everywhere at the moment. This weekend I’m off to The Poor and Veal so wherever you are, raise a glass this weekend in support of Aussie music.

The best in the world.