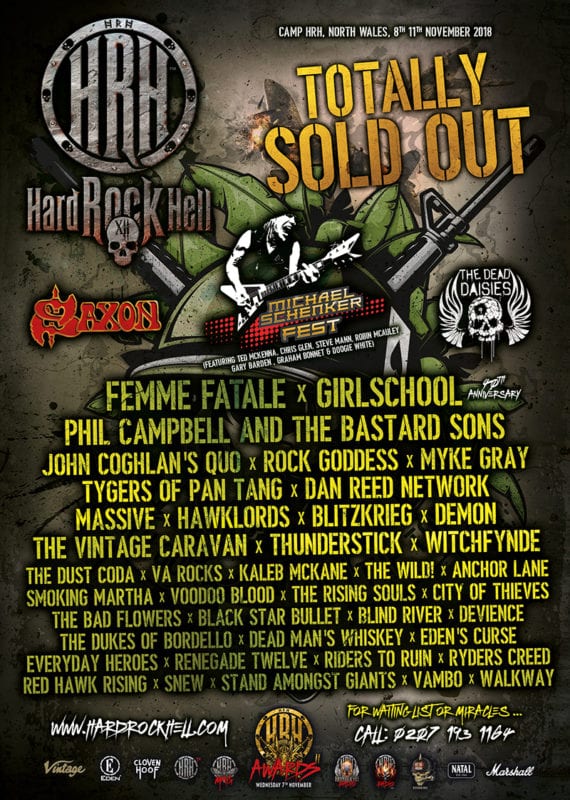 HRH have announced a further wave of bands who’ll be playing at the glorious sold out twelfth Hard Rock Hell, rocking Camp HRH in Pwllheli, between Thursday 8th and Sunday 11th November 2018.

As you’d expect, these excellent acts (chosen and voted for by the fans in tried and tested HRH fashion) join an already impressive line-up, including headliners Michael Schenker Fest, Saxon and The Dead Daisies.

The glorious twelfth’s Saturday rosta gains John Coghlan’s Quo (which as Mark Taylor from MetalTalk.net put it will “take you on a joyous journey of his golden past in one of the most celebrated and much loved rock bands the UK has ever produced. A night of beer-raising, feel-good factor Status Quo classics.”). And it gains Black Star Bullet: a hard rock 4-piece band hailing from Coventry, known for their strong, professional stage presence and all-round entertainment.

It gains Kaleb McKane (multi-instrumentalist singer-songwriter, described by producer Steve Brown; who worked with the late, great Freddie Mercury as “One of the best singer/songwriter rock guitarists I have heard this decade – an extreme quality”. Also added are Aussie high-octane, full throttle hard rockers Massive.

That’s a great big brew of talent to quench your thirst for rock! Europe’s leading residential festival provider delivers the goods again! Enjoy the music, along with the trademark HRH camaraderie, shenanigans and quality accommodation in the beautiful land of North Wales.

For further details and ongoing updates, waiting lists or miracles check out www.hardrockhell.com