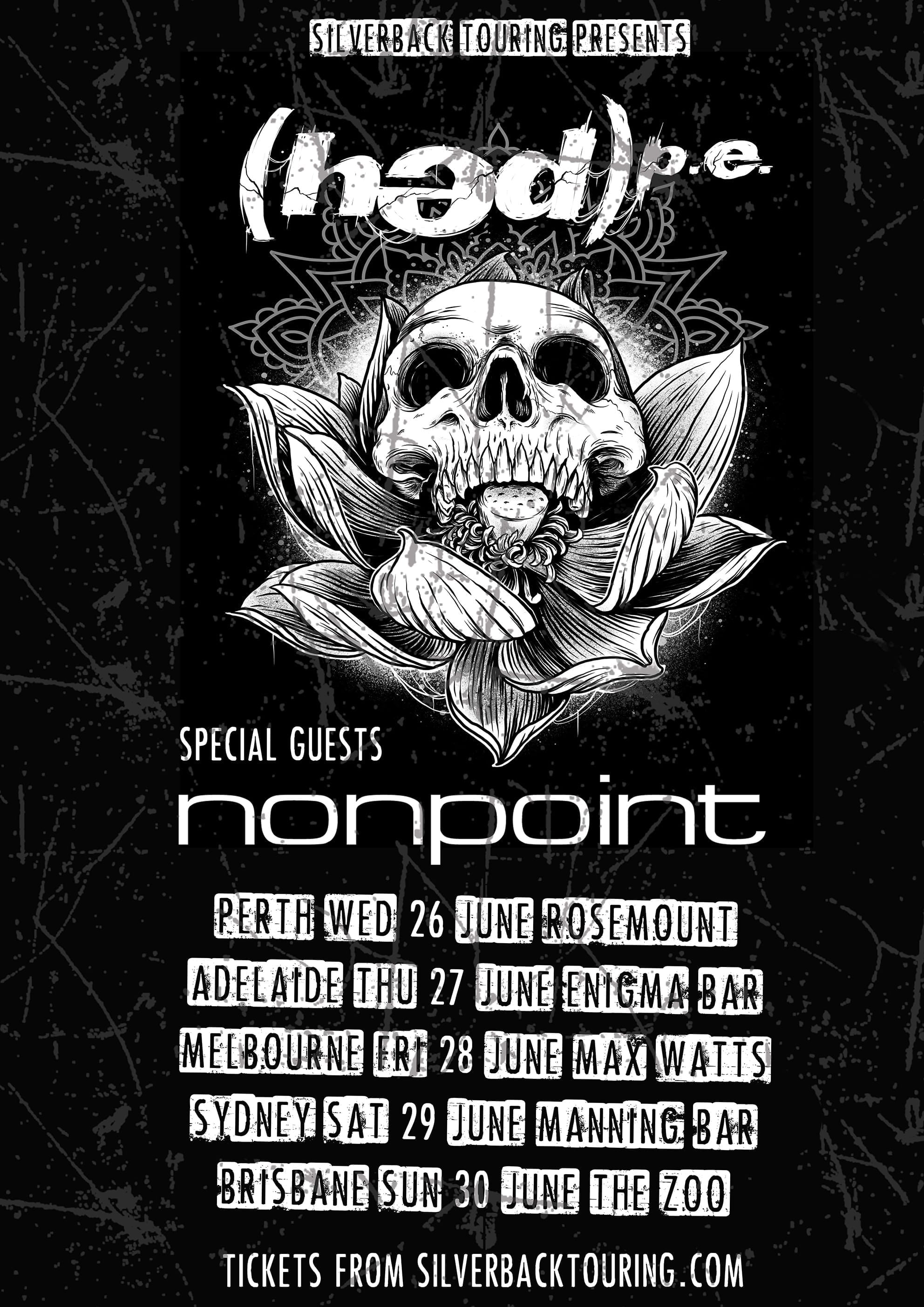 The ’90s were a big time for alternative metal, with rap-metal outfit Rage Against the Machine,  newcomers Korn and Deftones paving the way for an array of Nu-Metal clones. Inspirations bled from the speakers with two groups who were far from clones.

Apart from System of a Down, who had their own unique sound, came Californian based (həd) p.e. introducing G-Punk, not far behind Florida locals Nonpoint, who don’t like to pigeon-holed into any genre, with their own blend of hard rock and metal, who would support their aforementioned peers, amongst big names such as Mudvayne, Filter, Sevendust and Papa Roach.

(həd) p.e. are bringing Nonpoint down under with them at the end of the month and you would be on another planet to pass down this opportunity to witness two alternative metal giants sharing the same stage. If you are on (həd) Planet Earth you will click on the link below and grab tickets before it’s too late.

Heavy have gone through each band’s back catalogue to remind you what you will be missing if you decide not to leave your box, so stop living under a rock and get on down to the rock show! \m/

(həd) p.e. forming in 1994, stood for higher education, Planet Earth, whereas Nonpoint forming a few years later in 1997, was named after a Believer song, something to do with pollution, however, the name had a ring to it and was chosen as the bands’ name.

It wasn’t until 1997 when (həd) p.e. released their debut on Jive Records, a label mainly concentrating on hip-hop. Vocalist Jared (MCUD) Gomes described the style of music as G-Punk blending Gangsta Rap and Punk Rock. It was the Orange County Hardcore Punk scene which originally brought Jared and guitarist Wes Geer together, adding guitarist Chizad, bassist Mawk, drummer B.C. Vaught and DJ Product © 1969, to the equation, soon releasing their sound to the masses.

That same year Nonpoint self-released their debut, Separate Yourself (1997), following with Struggle (1999) on the now-defunct Jugular Records. It was the MCA release of Statement (2000) which got the ball rolling, gaining a spot on the Ozzfest 2001 lineup.

Apart from their debut which was a banger at the time, the real breakthrough for (həd) p.e. came from Broke (2000), also on Jive. Guests on the album included guitarist, East Bay Ray (Dead Kennedys), Serj Tankian (System of a Down) and Morgan Lander (Kittie)

The second single from the album also appeared on the Kevin Costner, Kurt Russell action flick, 3000 Miles to Graceland, where it gained fame from the soundtrack.

Nonpoint released their second on a major label, Development (2002), which saw their second Ozzfest appearance with their first single below.

The second single from the album gained fame from the NASCAR Thunder 2003 game, which introduced many to the band.

The final release on Jive for (həd) p.e. was Blackout (2003) with its second single, “Other Side”, which also featured on the same NASCAR Thunder 2003 game from EA sports. It was the first single for “Blackout”, which remains a staple on the groups live set.

Sonny Mayo (Snot, Amen, Sevendust, Ugly Kid Joe) played guitar along Wes, who he would later join in the non-profit organization, Rock To Recovery, which harnesses the healing power of music by bringing musical instruments and equipment in to treatment facilities to write and record original songs with people recovering from drug/alcohol addiction, PTSD, eating disorders, and other illnesses.

The next album for Nonpoint to be released was Recoil (2004), the only album on Lava Records with singles for both “The Truth” and “Rabia”

Another song which later gained popularity from its appearance on the soundtrack for Miami Vice was the Phil Collins cover seen below in all its glory.

Only in Amerika (2004) was the first album on an independent label for (həd) p.e., that being Kotch. It also was the first to feature new guitarist Jaxon Benge and drummer, Mark “Moke” Bistany (Otep)

Back 2 Base X (2006) was the first to be released on Suburban noise. The album had more of punk influence, taking inspirations from seminal punk outfits, The Sex Pistols and The Clash.

Nonpoint released To the Pain (2004) on the independent label, Bieler Bros. Records. The first single “Bullet With a Name” which had a distinct metallic groove to it.

Devin Lebsack got his first break as the new drummer for (həd) p.e. as a touring member for Back 2 Base X and would write for the follow-up release, Insomnia (2007) The music video for lead single, “Suffa”, was voted one of the Top 10 of 2007 on MTV’s Headbangers Ball.

Nonpoint would also see members leaving with Guitarist and founding member Andrew Goldman making his exit a year after the release of Vengeance (2007). “March of War” was the first single from the album.

A remix of “Everybody Down” saw more fame in the wrestling world with the song featured on WWE Smackdown vs. Raw 2008.

The follow-up, Miracle (2010) was the only to feature guitarist Zach Broderick, replacing Goldman. The album was produced by Chad Gray (Hellyeah, Mudvayne) and guitarist Greg Tribbett (Mudvayne). Chad features in the chorus for the title track and single for the record.

A Year prior, (həd) p.e. released New World Order (2009) The album’s lyrics derive from the 9/11 Truth movement, with an Anti- Bush tone, also dealing with the existence of extraterrestrial life, the economy and the Iraq War.

The follow-up Truth Rising (2010) continued the focus on the 9/11 Truth movement, this time with alternative metal peer, guest vocalist Lajon Witherspoon (Sevendust), unlike rap guests Kottonmouth Kings and the Dirtball, who featured on the album prior.

Singles were released for “I Said It” and “Left for You”

Four years since Truth Rising long-time member DJ Product © 1969 had left the band, removing turntables from the (həd) p.e. sound. Evolution (2014) was the result. A teaser of the tone of the new album on their Facebook page and soon after, the track “One More Body”

The Return (2014) was the first Nonpoint album to enter the Billboard 200 charts at No. 38, making it their highest charting album to date with approximately 8,125 copies sold during its first week of release. It has sold 27,000 copies in the United States as of June 2016. The first single can be seen below. The album was released on Razor & Tie in the US and on Metal Blade worldwide.

Forever (2016) was the result with the video for the single below, showing (həd) p.e. back at the top of their game.

Subsequently the same year Nonpoint released The Poison Red, making it the first album to feature new lead guitarist B.C. Kochmit. Just check out the new guitar riffs in the stellar single release for the video seen below.

Getting to the end of this column I will leave you with the last single from Nonpoints’ latest release and a new lyric view for the upcoming release of the latest from the mighty (həd) !!!