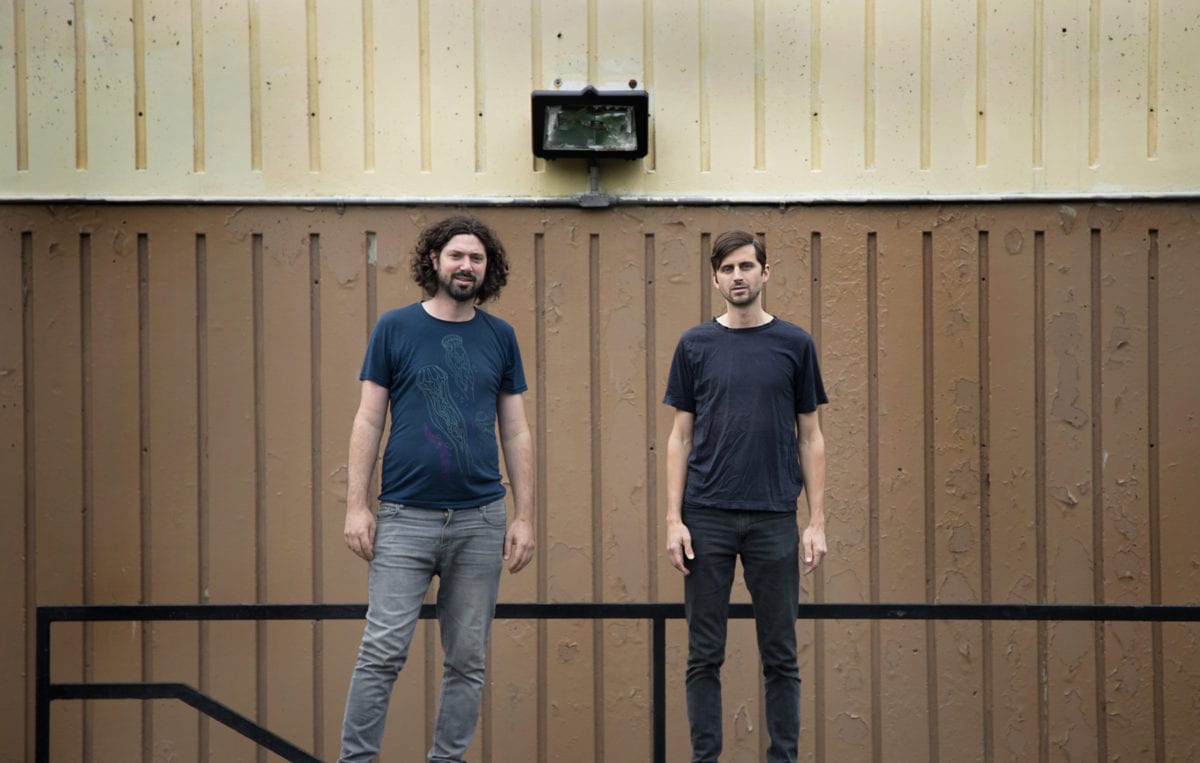 The New York / Sydney duo manage to take the trance-like repetition of Dawn Of Midi and the spatial-sonic exploration of The Necks to new levels.

Their debut album consists of four improvised pieces, each beginning with a short musical theme which loops upon itself, but never perfectly. These unbalanced or slightly out of phase loops work with and against one another, generating a kinetic charge that brings the theme to life. The theme begins to transform, surging forward with ever-more energy, and morphing into unexpected new forms with all the random beauty of organic evolution. Within a piece their sound might shift rapidly from raw and heavy blocks of sound to subdued, trance-like polyrhythmic meditations.

DRIFT opens with a delicate and building guitar loop that provides a foundation for experiments with phasing and polyrhythms.

SCATTER begins with a bleak pan over a dystopian ruin, with circling buzzards and dark clouds choking the sky. Slowly but surely, life begins to stir from the ashes and toward an uncertain future.

BUDGE is a bit-mashing, electronic nightmare; the sound of technology gone haywire, all jagged beats and bits and bleeps. The digital storm stabilises into an overdriven blues and psych rock section, with a shimmering post-rock bliss out.

ROLL follows a wisp of particles moved by the wind, slowly circling back upon itself to gather strength and rise high into the sky, glinting in the sun in a moment of fleeting beauty before falling back down to the earth.

Like Battles on a heroic dose of LSD, Ground Patrol transforms what would be inert musical cells into an ever-blooming fractal. Their process is a deliberate reaction against music that is overly mathematical, careful, or precious. The duo eschew order for flow, embracing chance and randomness with an approach that relies on the dialogue and spontaneity of live performance, and is rooted in the physicality and response of their instruments.

This trans-continental duo is comprised of New York-based guitarist Kyle Sanna and Sydney-based drummer Alon Ilsar. Kyle is deeply immersed in New York’s improvised music scene, and has performed with virtuosos like Yo-Yo Ma, Edgar Meyer, and Chris Thile, and in venues like Bach House in Eisenach, the Sultan of Oman’s Royal Opera House, and Carnegie Hall.

Alon Ilsar has been a member of a multiple, vital Australian experimental acts, including the experimental pop group Gauche, avant-garde metal band Darth Vegas, and electronic future-jazz trio The Sticks. More recently, he has collaborated with the Neshamah Dance Company and Trevor Dunn.