Swedes Grand Magus return next month with their brand new album Wolf God which sees them once again deliver an amazing dose of their doom metal tunes which will eagerly be lapped up by their fans right around the world. Recently HEAVY Mag was lucky enough to be able to sit down and chat to the band’s main man Janne ‘JB’ Christoffersson about what fans can expect to hear this time around.

“All of our albums kind of revolve around the same kind of ideas,” says JB as he tries to explain what was inspiring the band with Wolf God. “There are all kinds of fantasies in there, personal things that I ahve been interested in my whole life so I don’t think that this album is particularly different in that aspect to the others, but every time there is a new kind of slant to it I guess. But this time we did have a different approach when it came to writing and recording and I think that is probably the biggest difference to the newer albums that we have done.”

That change came about as the band embraced new technology and meant the band didn’t start by recording the drum like they have in the past. “With the advance of digital technology and recording, especially the possibility of recording when you are not even in the same country, you can do an album without even seeing each other, I think that has its advantages in some aspects but for a band like us it makes much more sense to record the album together and to record it live… which is what we did this time. That meant that we did the drums, bass and guitar all together. We were recording together and doing takes instead of recording the drums and finishing that in one week and then spending the next week doing rhythm guitars – that way can become sterile and this way was a lot more fun. But it also meant that we had to do most of the work before we went into the studio, so that’s what we did. We jammed a lot and rehearsed properly and then we were ready to do it.”

You can listen to our full interview with Grand Magus on Spotify. Wolf God is out April 19th on Nuclear Blast. 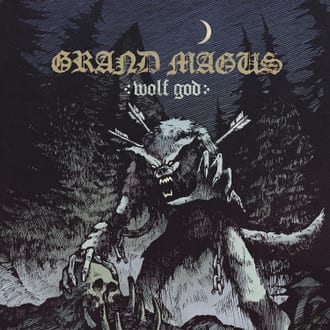