The James Dean of Heavy Metal is set to grace our shores in June 2019, nonetheless with ALCATRAZZ in tow! Renowned for his suave stage presence heading up the likes of RAINBOW, ALCATRAZZ, MICHAEL SCHENKER GROUP, IMPELLITTERI and his solo band GRAHAM BONNET BAND – not to mention his powerful, distinct and iconic vocal sound, that goes straight to 11 then swiftly into smooth melody in a heartbeat – GRAHAM BONNET delivers a solid stage trip through his career, that will not disappoint the discerning fan.

With a career spanning a range of musical styles, and hit songs, it only makes sense to start with a mention to his first hit with the duo, THE MARBLES in 1968, with the single “Only One Woman”. The hit song, written by Barry Gibb, Robin Gibb and Maurice Gibb of the Bee Gees, marks the impressive start to an awesome and diverse career.

Embarking on the first leg of his solo career, Bonnet smashed the charts with a self-titled album that hit gold in Australia. The album was met with great praise with hits including “It’s All Over Now, Baby Blue”, a Bob Dylan cover, which charted in the top five in Australia in 1977. Further to the success of this release, the single “Warm Ride”, Bonnet’s take on a leftover track from the Saturday Night Fever sessions and written by the Bee Gees, went to number one in Australia.

Bonnet found his career taking a heavier Rock and Metal route when Ritchie Blackmore chose him to replace Ronnie James Dio on vocals for the bandRAINBOW. A hard act to follow, and a new genre to ignite, Bonnet proved his skill yet again, singing on RAINBOW’s iconic album ‘Down to Earth’, which became his most successful release to date with two hit singles “Since You’ve Been Gone” and “All Night Long”.

After Rainbow, Bonnet joined the MICHAEL SCHENKER GROUP, and recorded the ‘Assault Attack’ album, considered one of their best releases of all time.

In more recent years, Bonnet has toured consistently around the world with his GRAHAM BONNET BAND, to throngs of fans.

Now, for the first time in Australia, you will hear Graham and band perform the iconic RAINBOW album ‘DOWN TO EARTH’ in its entirety, as well as a slew of other hits from the melting pot of his career.

Limited VIP Meet & Greet packages will be available. VIP punters will be graced with a special acoustic performance by Graham, along with a meet and greet/ photo opportunity, entry to the show and a couple of little extras.

Strictly Limited Ticket Presale: Friday, 5th April At 10:00am AEDT Only AT: www.hardlinemedia.net 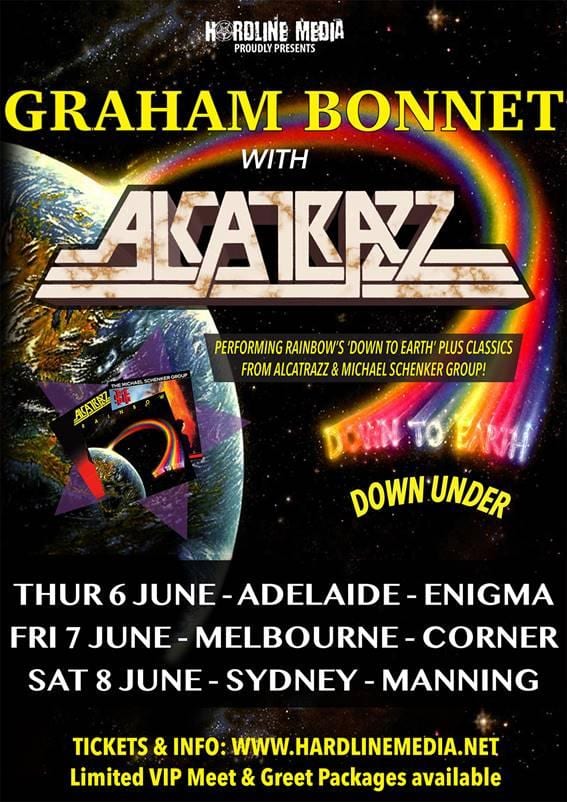