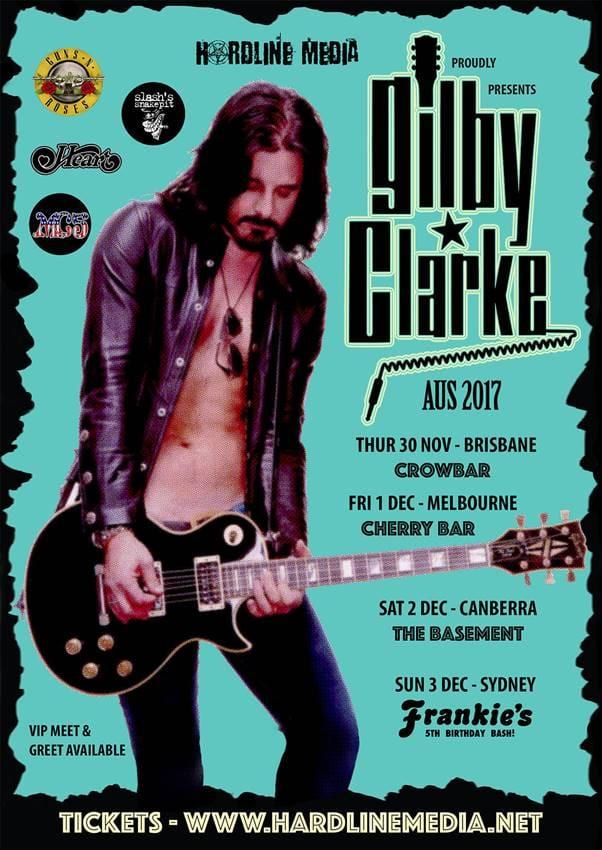 Gilby Clarke needs no introduction to rock fans. He played in both Guns N’ Roses and the MC5. Who else can claim membership in two of the most life-altering rock ’n’ roll outfits to ever exist on the planet? Clarke hit the stage with his GN’R running buds at the 2012 Rock ’n’ Roll Hall of Fame induction ceremony – he appeared on the band’s The Spaghetti Incident, Live Era ’88-’91 and Greatest Hits albums, and spent years on the massive Use Your Illusion world tour in the ’90s. Then there’s his solo career that earned him critical winks and sales for such albums as Pawnshop Guitars (including the American hits “Cure Me … Or Kill Me,” and “Tijuana Jail”), The Hangover (two songs made Bruce Willis’ The Story of Us), Rubber, 99 Live & Swag and he is headed here in just a few weeks!

Gilby is hitting the east coast of Australia for some intimate, sweaty, raw, totally Rock ‘n’ Roll shows! Gilby will be Will be ripping up a selection of hits from his past bands Guns N Roses, Slash’s Snakepit, RockStar Supernova, MC5 and much more with full band in tow.

With the final show at Frankie’s in Sydney being a huge party in celebration of their 5th birthday. – FREE ENTRY

Tickets One Sale now via: www.hardlinemedia.net