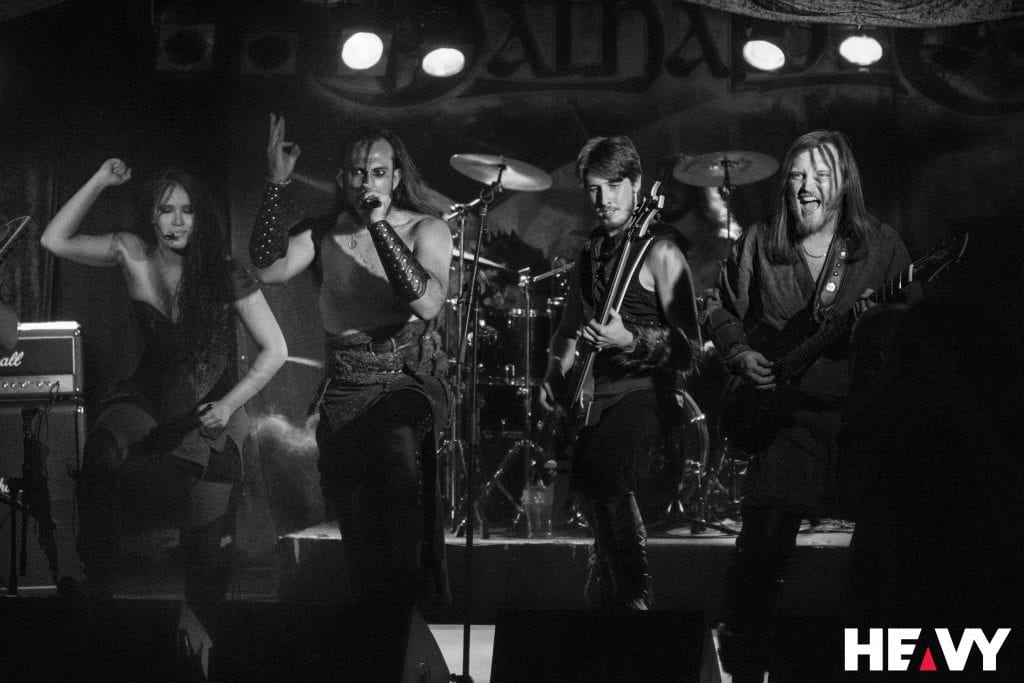 In support of their newly released album Voyage into Eternity,  Queensland’s Valhalore have embarked on a six date east coast tour, and April 15 sees the tour roll into Melbourne.  The venue is a last minute relocation after the sudden closure of the originally booked  Mr BoogieMan Bar, but it’s a terrific substitute. The Central Club has been a mainstay of Melbourne’s live scene for many years, and with the decision on the night to close the front  bar to the public and open it up as an extension of the band room the place has a great feel.

First up is Triple Kill, proudly announcing at one point that this is gig number five in the band’s career.  Raw and full of enthusiasm they launch into a set that has a distinctly old school metal feel to it.  It’s new, but somehow has a touch of familiarity about it all.  Second last track of the set Blades is just a killer track, start to finish. And ending the set with a cover of Maiden’s Hallowed Be Thy Name seems like setting themselves up for a fall, yet they pull it off in fine style.  There’s a few rough edges to be sure, but it’s a great way to kick off the evening.

Next up is Keggin, and it’s a total change of direction for the night.  A straight up power trio that seems to have timewarped directly from a seventies punk gig.  That less-political, less hatefilled punk world that the Ramones created, that is.  There’s a lot of tracks here coming in under two minutes, and not a guitar solo in sight.  There’s a theme running through this band like a well poured beer – alcohol.   The good (Jack Daniels), the bad (Smirnoff), and the … um, thirsty (the band).  Seriously, a brewer needs to sign these guys and pump out some ads as quick as possible.

If Keggin were a change of direction from  Triple Kill, then the next band up is a trip into a new dimension.  Hailing from the ACT, Beast Impalor are make their Melbourne debut, and doing it like no other.  A wackier, less demonic Cradle of Filth?  A busload of metalheads kidnapped by a crazed circus ringmaster?  A children’s party clown on a turbo charged bulldozer ploughing through a field of kittens, set to the sound of a carnival organ?   Equal parts madness and genius, like Donald Trump playing Grand Theft Auto with the Riddler from Batman.  Or something.  It’s audio Clockwork Orange, just like Alex there’s the burning need to scream but no way to look away.  The set is all done with no drummer (they are still looking), and it’s freaking great.

Valhalore waste no time in taking the stage next and continuing the long and proud heritage of Australian Vikings!  Rathnar Lothbrok is a Victorian farmboy, and the home of Australia’s Viking metal is Queensland – sure, why not.  From the moment they take to the stage, ushered on by backing tracks and a haunting tin pipe solo from Sophie Christensen, the epicness abounds and the longboats have arrived.  The set is drawn mostly from the new album, and the tracks crash against each other like axes hacking at the enemy shields.  Vocalist Lachlan Neate is in fine form, striding the stage and delivering vocals in both clean and growled styles effortlessly; all the while commanding the crowd.  The audience have been ready and waiting, and now willingly join in.  A shield wall charge, left stage versus right stage.  A circle pit.  An all-in spinning circle linked arm in arm.  It’s great to hear, great to watch, great to feel.  The sound is terrific (has been for all the bands throughout the night) and the band are playing their hearts out.  Guitarist Anthony Willis is stunning in various showpiece moments, fingers flying across the fretboard.  The entire set is world class, and over way too soon.

The final act of the night is Aquilus, and they’ve been handed the poison chalice really.  After so much energy and vibe through the night, their style of considered musical intensity is always going to struggle to keep things going.  An extended setup/sound check doesn’t help things either.   Whereas the crowd has readily embraced the earlier acts, by now the thinning crowd seems content to sit back and watch.  There’s nothing wrong with the performance, the music is complex  and brooding and delivered so well – but it’s like there’s a glass wall between band and the audience now; the band in a fishbowl to be observed more than experienced.

Overall, it’s an amazing night.  Promoter JaxOzPresents has done a great job pulling together a diverse line up of bands that somehow compliment and build the night.  And Valhalore have delivered a performance that tops of a night that shows just how diverse and enjoyable  Australian metal  can be in a local venue setting.  There need to be more nights this good…