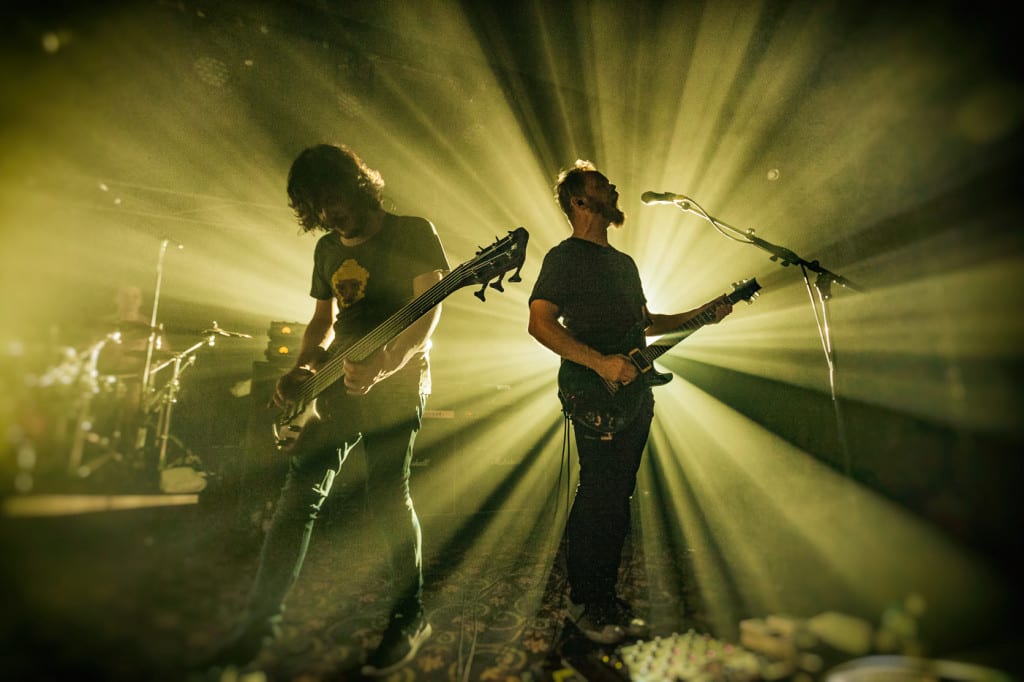 Analogies like this are possibly a little silly, but apt in this case. Karnivool are kinda like the Tool of Australian HEAVY music. Musically, they are certainly influenced by Maynard and co. They have built that enigmatic aura around themselves too, both through the quicksilver nature of their music and the fact that they take a long time to incubate and release their albums (The ‘Vool obviously being a little more reliable than Tool). So when they tour, which sometimes is only once a year, you damn well make sure that you get there and that you savour it like the finest wine.

They often bring interesting and different support bands out with them too, and this tour was no exception. Fait is a Perth-based post/space rock instrumental act. Think a slightly more ambient version of Sleepmakeswaves. Their music is quite gentle, relative to what came after anyway, and atmospheric, to the point where I didn’t even need my earplugs in (which virtually never happens at rock and metal shows). Plus, their sound is quite simple, rhythmically. However, I found their music to have a real subtle power to it. And what they do with guitars, bass and drums, with occasional keys, extra percussion and electronics, is very impressive indeed. Their set built beautifully to a powerhouse crescendo of a climax. These guys are definitely a band I will follow up on.

At this juncture, I really have to hand it to Melbourne rock crowds. They generally roll up to support the support acts, even the relatively obscure ones. This massive pub venue was nearly full while Fait were playing, and the crowd gave them a very warm reception even though most probably didn’t know their stuff.

Karnivool are one of my favourite bands on the planet, and having seen them at least a dozen times over the last 10-12 years it’s been very interesting to see the different little nuances inherent in their live sets. This night’s set started out fairly low-key, included a number of brand new songs from their next album early to mid-set, before building beautifully via showstoppers All I Know and Deadman, to a truly stupendous climax in the almighty, Themata. That song has become one of the great set-closers in rock over the years. This night it really did tear the roof off the Crocko, and sent the sold-out crowd into a frenzy.

Ian Kenny’s voice soared to the very heavens. Steve Judd is just a compact ball of muscle and his precision percussive pounding was a highlight, his snare especially often resembling an explosive cannon shot. And Drew Goddard, Mark ‘Hoss’ Hosking and John Stockman on the stringed instruments locked in an absolute treat. It’s always incredible and a privilege to watch gifted and accomplished instrumentalists who have been playing together for years and years.

A two-pronged encore of Aeons and the ever-present, ever-emotionally wrenching New Day, and the band left the stage after 90 minutes of purest power, soul and passion the way only Karnivool can do it.

It was a frigid, wet Melbourne winter evening this night, but the ‘Vool got the heat to rise in this classic old Melbourne rock pub, and the packed-out crowd responded with extreme gratitude and jubilation. I await with rabid anticipation for their next album.

SOILWORK With New Song And EP