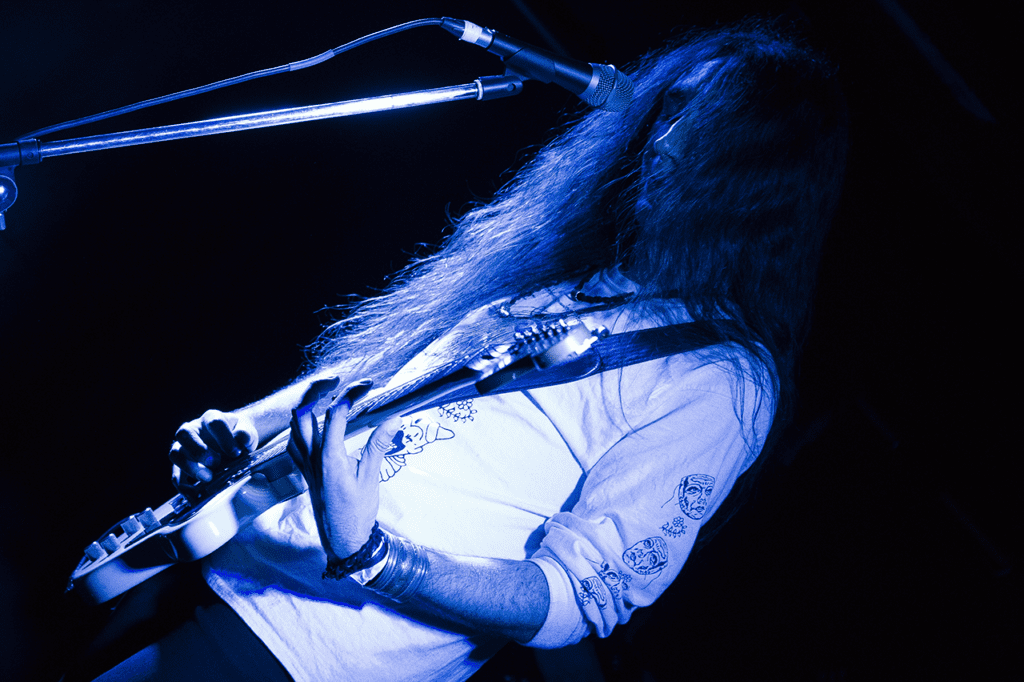 It’s been a while since the black gaze pioneers, Alcest (Stéphane “Neige” Paut and Winterhalter) have set foot on Australian shores. With the release of their latest album Kodama, it was only a matter of time before the French duo graced us with their presence again. In January 2017 they announced an Australian/New Zealand tour, visiting our eastern neighbours for the first time. The anticipated Brisbane show had Deafcult as the supporting act, a Brisbane punk shoegaze group with a solid record release in 2015.

Deafcult opened the show with a great performance. The bone-echoing guitar was my first initial introduction to them. Their sound beckoned people to listen and they did a great job in warming up the crowd with their performance and banter between songs. They were a very humble group and I was pleasantly surprised by their music having not listened to them previously.

After Deafcult had finished their performance, Alcest arrived on stage to do the usual sound checks. By this time more fans were entering and the die-hard supporters were taking their place amongst the pit. There was an interesting range of fans at the gig, ranging from heavy metal lifers to others who were dressed in their casual Saturday attire. It was an interesting dynamic and showed the influence and scope of Alcest’s music. As Alcest appeared on stage Neige simply gave a wave and entered into the first track of the night from their Kodama album, Onyx.

The show was simply put – stunning; the brutal highs combined with the hauntingly beautiful lows took the crowd on a journey that few bands could compete with. It was an intimate telling of Neige’s psyche and experiences, masterfully drawing the crowd into every emotion, with pit antics during the guttural screams of Eclosion and lighters swaying during the more intimate ‘Sur l’océan couleur de fer’. The show was an experience that is honestly hard to put into words; Neige connects with his audience in a mesmerising way that needs to be experienced to truly understand.

The set list was a great combination of old and new, promoting their latest release ‘Kodama’ as well as playing previous fan favourites. The first three opening songs were ‘Onyx’, ‘Kodama’ and ‘Je suis d’ailleurs’ from their latest album. Alcest treated the crowd to the mesmerising ‘Écailles de lune – Part 2’ and fan favourite ‘Autre temps’ before heading back to Kodama with the fantastic ‘Oiseaux de proie’ and ‘Eclosion’. The remaining four songs were ‘Souvenirs d’un autre monde’, ‘Sur l’océan couleur de fer’, ‘Là où naissent les couleurs nouvelles’ and the epic finale of ‘Délivrance’. With the crowd chanting “one more song” Alcest delivered with the encore ‘Percées de lumière’. The list was a fantastic grouping of the heavy and hauntingly beautiful side of Alcest that every fan knows and loves.

Overall the night was a fantastic start to the Australian portion of Alcests tour. Deafcult were an exceptional supporting act, showcasing their talent and personality while warming the crowd up. Alcest were mesmerising, taking the crowd on an intimate journey through the highs and lows of their music, and the emotions that it creates. Alcest live is highly recommended for any metal fan that wants to experience an emotionally charged sonic journey by pioneers of their genre.