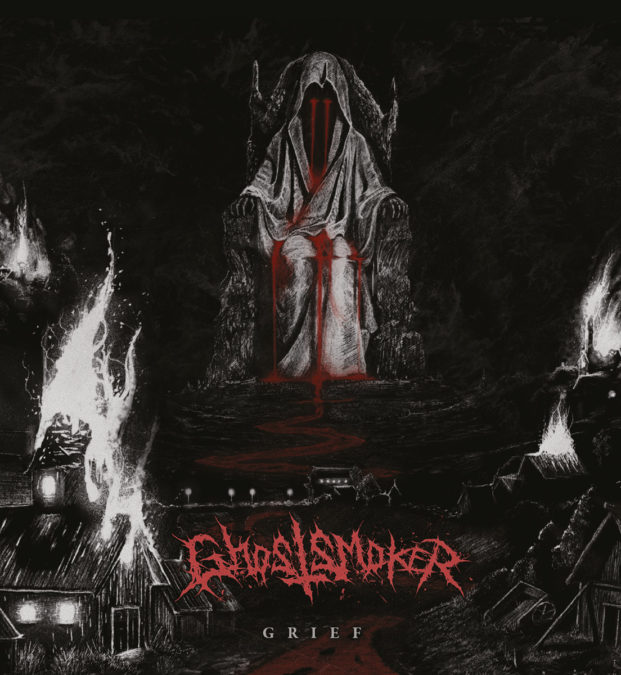 Ghostsmoker, that sounds a little bit scary, and I’d put money on these guys being some kind of doom band. I already knew that, though, because I read their press release, but let’s pretend I didn’t, and I’m just super intuitive and intelligent. You know it’s the truth anyway, so let’s just move on to the review.

Ghostsmoker have recently released a four-track EP titled Grief. Now, I know sweet fuck all about these guys, but apparently “They play a blackened style of doom with some super thick distorted tones and a really cool way of maximizing the ambiance some black metal manages to squeeze in without becoming some kind of ambient shoegazey stuff”. I’m just confused now, so let’s just see what the fuck this actually sounds like, shall we?

Doomy, it sounds fucking doomy, even before it gets doomy! Astral Realm is the opening track, and it’s as dark as a block of Cadbury Old Gold with 70% Cocoa. Slow and brooding best describes the sound of the track. Oh, and evil, a little bit evil. Let’s make that very much evil.

Track 2, Eternal Veil, somehow manages to doom even harder than the opening track. I did not think that was possible, but they took it there. Heavily fuzzed out guitars chug their way along and give the feeling of being dragged very slowly through a swamp of quicksand. If anyone happens to find Artax in there, can you please let me know, he’s been missing since the early 80’s.

Title track Grief keeps up the antics by slowing down a little bit more to doom harder than the tracks before it. How much can one band doom? About this hard, I’d say, as any more would just become brown noise. And just between you and me, I could do with not shitting myself again today. Whoops, wait, I’ll be back in a minute or two …

The final track Mass Grave starts off a little more upbeat, a little. A very little, and then it gets evil as fuck as the vocal tone becomes somewhat more possessed. It is the fastest track so far, but is still about as slow and doomy as the average doom fan could wish for.

This isn’t my average cup of black tea, but it’s almost as dark, and it dooms really hard. If you are a fan of doom, you’ll love it, and you’ll probably leave wanting more songs for your listening (dis)pleasure. Get ya doom on, get ya get ya doom on!