The energetic  Danko Jones has just hit Australian shores ahead of his re-scheduled tour and this is one of those tours that you are not going to want to miss this year. Anyone who saw the band perform at Soundwave all those years ago left knowing one thing – they had just seen a band who really knows how to put on a live show. Now they are back to re-engerise Australia with shows that will see them tantalise everybody with tracks from their new album A Rock Supreme, and Danko himself couldn’t be more happy.

“Yeah that was a little disappointing but it wasn’t cancelled,” he says with a laugh when we talk about the fact the tour had to be bumped back a little. “I am just so happy to be returning back to Australia though.”

That quickly moves the conversation to talk about that legendary Soundwave during which time Danko Jones won over more Australian fans than even they could have expected. “It was such an amazing line-up that year,” he says reflecting. “Metallica, Slayer and Anthrax – three of the top four and then to top it off you had Sick Of It All, Madball and Duff. Then we had this huge Canadian contingent that were all bands that we were friends with – Fucked Up, Cancer Bats and Sum 41 and on and on it went so we just had a blast hanging out with these friends of ours.”

The recent live teases of some of their new tracks live should be enough to get fans really ready for this tour, but for the band it poses a new problem. How do they put these new fan favourites into their set list without taking out the tracks that the fans are already in love with. “Well I don’t put the set lists together JC does… so that is his problem,” says Danko with a laugh. “I just play whatever songs are on the list, but you know there are some songs that I am absolutely sick and tired of playing but we have to pay them because most people know what they are… so we just have to play them. But you know that is part of the job and if that is as annoying as it gets then it is a pretty good job, so I don’t mind playing them. But “Fists Up High” is a newer song, it’s off the new album so I love playing that song – it’s always fun to play the new songs. We are playing five or six songs of the new album because whether people realise it or not touring is to promote something and it is about promoting the new album, we are touring because we have a new album out.”

That brings us to start talking about the new album and how the new tracks seem to have an energy with them that sounds amazing live. “”Fists Up High” we have been playing for about two months,” he explains. “It has been getting a great reception and we just shot a video for it like two weeks ago. It is the first video that we have done in seven years where we are actually in it and performing in front of cameras for it. We haven’t done a video where we have actually had to lip-sync the words in front of cameras for seven years because I was just so sick and tired of videos. I hate being in music videos so for seven years we had people film our live shows or animate our videos, if you go back and have a look you’ll see everything was animated or taken from live footage because I just personally can’t stand doing music videos.”

When we get to the end of our discussion I ask Danko is there anything he would like to say to all the fans out there before they start the tour and he says in his familiar teasing way “Yep, just great tickets to the show.” 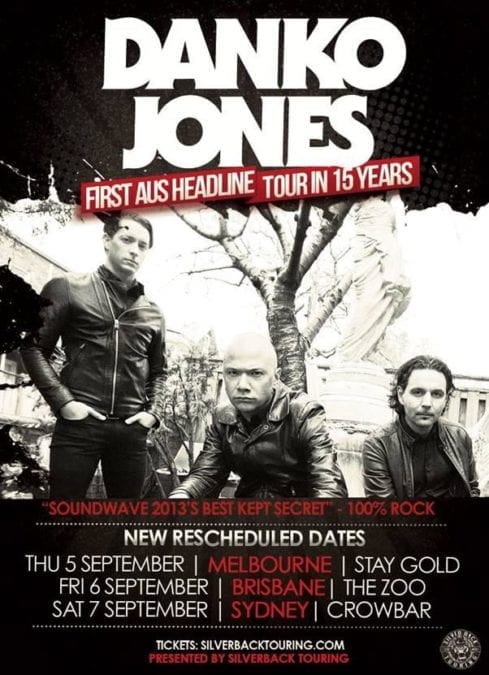