HARDLINE MEDIA proudly present GEOFF TATE’S OPERATION MINDCRIME! The legendary frontman returns to Australia with his band to perform the classic concept album “Operation Mindcrime” in its entirety, and much more! BRISBANE, SYDNEY and MELBOURNE get ready!

Multi-platinum selling, Grammy nominated singer/songwriter GEOFF TATE is regarded as one of the most skilled and iconic vocalists in the rock and metal genres. His soaring vocals combined with his complex, lyrical content and full band, provide a backdrop for a rare live experience. A voice. An album. A band. Not to be missed.

After a long, successful and critically acclaimed international run for the 30th Anniversary of “Operation Mindcrime” throughout 2018 and 2019, Geoff and the band will grace Aussie shores with a much-anticipated performance of the entire album, followed by many more hits.

TICKETS ON SALE FRI 6 SEPTEMBER AT 10AM AEST – ONLY AT: www.hardlinemedia.net

(*EARLYBIRDS CATCH THE WORM – THESE TICKETS ARE CHEAPER, NO BOOKING FEE CHARGED!) 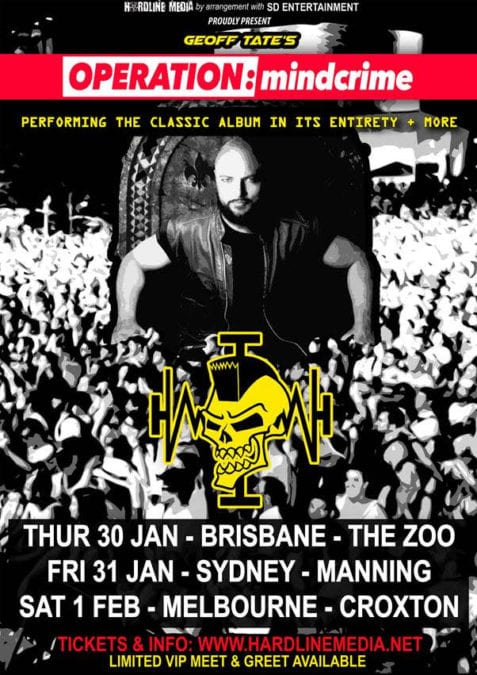