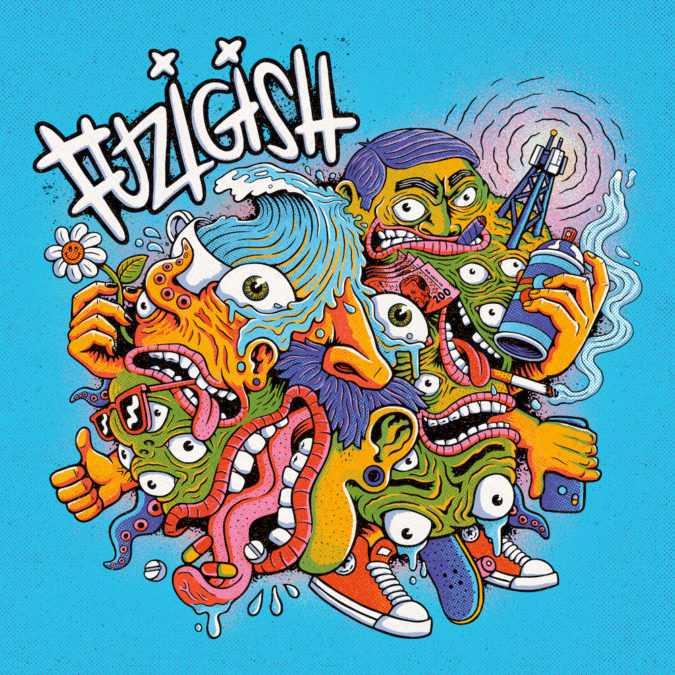 Fuzzy-gish, Foo-Zee-Gish, Foo-Zy-Gysh? I have no idea how to say this band’s name, but that probably doesn’t matter. What matters is the music, or so they lead us to believe. And when a self-proclaimed “iconic” band releases a self-titled after 25 years in the game, you’d like to think that it’s a statement of the band and their sound.

As for their sound, it’s apparently for fans of Rancid, Suicide Machines, Mad Caddies, Hog Hoggidy Hog, The Interrupters, The Mighty Mighty Bostones and The Expendables. I haven’t even heard of half those bands, and the other half I couldn’t really give a fuck about but let’s see what Fuzigish delivers and if I actually care.

Persistence is the first track off the blocks, and it opens with some weird little country western theme thing. Enter rolling bass line and brass. And now I’m scared, am I about to sit through a ska album? Please don’t.

It’s actually pretty catchy stuff, and the horns are kind of sitting in the back and only poke their heads out to add a bit of atmosphere here and there. Not a bad track.

This is What I Know is up next, and so far I know sweet fuck all. Bass & drums get us on our way, and we are soon joined by guitars and horns. Yeah, horns, not the metal kind that we favour around these parts though. My early thoughts with this album is that the production is far too good, and the songs are far too long to slot it into the “just another punk album” catalogue. These guys actually write alright songs, horns and all.

A series of solid snare hits kick off No Regrets, and shortly after some vocals, guitars and horns join in for the fun. It’s a rocking little number which gains some balls mid-track as some big tom fills take over the song. 3 songs in, though, and the horns are slightly starting to get on my nerves.

N.S.D.P. Never Snort Dirty Pills? Never Shag Dirty Punks? No Shit Dick Phace? Who the fuck knows? What I do know, is that this one is way to Ska to deserve any more of my time. National Slam Disaster Plan btw…

The Writing’s on the Wall, and it just might be after that last ska banger. An intro which reminds me of something from a Rob Zombie track gets my hopes up until the song starts, and I’m smothered with horns again. It does start rocking though and isn’t actually a bad track, bar those pesky horns. They’d probably be an enjoyable band to see live.

1 minute and 16 seconds of bass, snare and vocals. That’s what Redefine is, but before they get carried away, they should probably define what the point of that track was?

The band fucks around for a bit before Believer kicks off, with fucking horns. They kinda fuck off quickly enough for the song to groove along, but unfortunately appear again shortly after. This one has got some strange jungle vibe going on. It’s about truth, whatever the fuck that is these days.

For a minute there I thought this next track Man Down was a Foo Fighters cover. Turns out it wasn’t though. Just some weird track with piano, and of course horns. Lounge Reggae?

Go, Pearl Jam cover? Unfortunately, not, which is probably fortunate because I fucking love that song. This one, not so much, but it does have some cool natural guitar harmonics which give this guitar player a bit of a semi. Not so many horns in this one either, which helps give it some added credibility, as does the naughty swearing bits which add to my now half chub.

No Wrong No Right. Correction, No Horns Yes Right. Finally, a song without those pesky fucking tin tubes. Straight up punk song, I could do a few more of these!

Second last track Saddle Up got my hopes up early, and I thought it might also be free of horns. That failed pretty fucking quickly though, but they didn’t hang around long enough to spoil what actually isn’t a bad track. I mean, it’s all much of a muchness, but they did just drop a horn solo, which kind of fucked shit right up. The bass line is pretty fucking cool, though.

It Goes Like That, yeah it does. It goes like horns, and then some more horns. Way to end a ska album, with more horns and stuttered guitar chords. They even drop some la la la’s on this one which is a treat for all you ska fans out there.

If I had taken the time to read some info on this band and discovered that this was going to be a ska album, I probably would have opted out and handed it to someone who cares.

Admittedly, and possibly embarrassingly, it wasn’t actually that bad of an album. I mean, I’ll probably never listen to it again, but I didn’t hate it.

If they pop up on a festival somewhere, I may even check them out because they seem like a fun band.

Oh, and the album cover is rad!