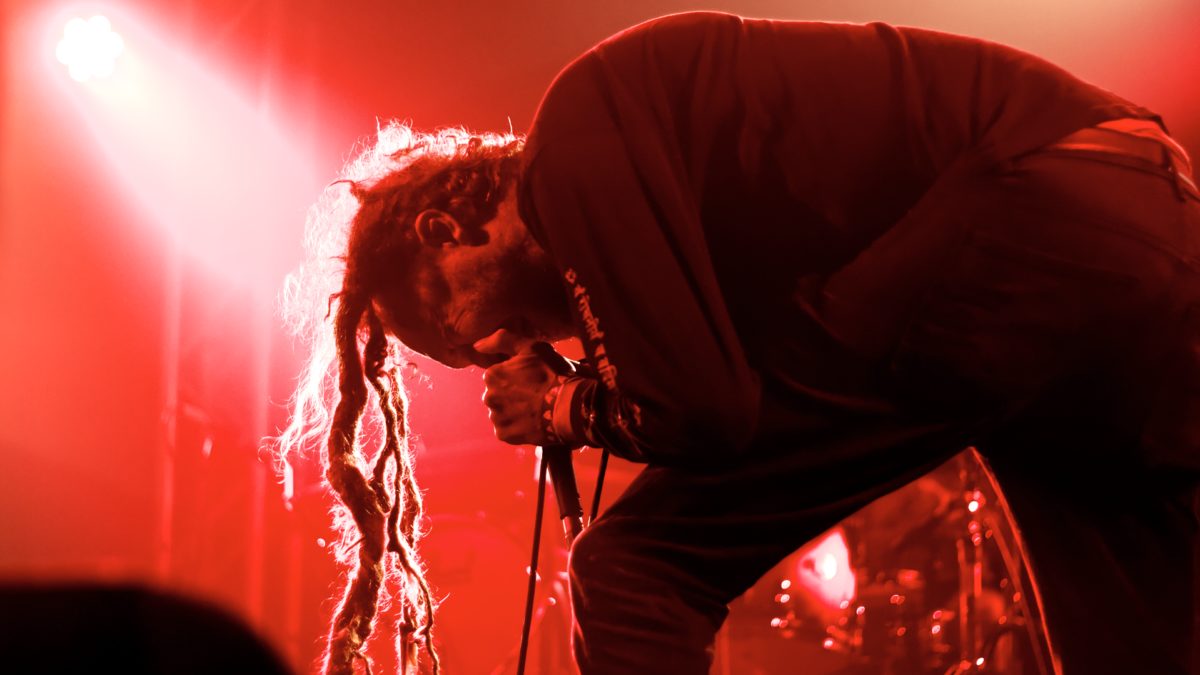 As I sat around on my fat ass drinking Jack Daniels and eating Christmas pudding in my Merry Grinchmas socks, I pondered what the fuck I was going to do for New Years. I mean, how the fuck do you celebrate the year 2021 which played out as one big clusterfuck of a “Hold My Beer” meme to the shit fight that was 2020.

Then I got a message from the Heavy Lords above asking if I’d like to review Frenzal Rhomb at The Triffid on New Year’s Eve. Before we go any further, it was just Krispy in his bed robe, via messenger, looking more like a hobo than a Heavy Lord. Let’s not let the truth get in the way of a good yarn, though.

So, now that you’ve all got the image of two semi-naked middle-aged men discussing a New Year’s Eve party with a bunch of possibly semi-naked middled aged punks, let’s get to the show then, shall we! Let me just start by saying that The Triffid is by far my favourite live music venue in South-East Queensland. If you don’t know the history behind it, the venue is an old, World War II hangar, which due to a vision by ex-Powderfinger bassist John Collins, is now an 800-capacity world-class live music venue complete without multiple bars, a kitchen, beer garden, outdoor balcony and live room mezzanine.

After quickly stuffing my face with a delicious Karrage Chicken burger, I leg it into the concert hall to check out Ghost College, a local alternative/punk rock/indie band, or so they tell us. To be honest, my first impressions were pop punk as I’m confronted with a 3-chord singalong section reminiscent of something from the MTV top 40 playlists of the late 90s. The 3-piece unit of bass, guitar and drums then surprises me as they shift into more of a heavy grunge feel with
some rocking grooves.

Their guitarist looks somewhat like a Kurt Cobain reincarnation, and the tunes for a moment make me believe there may be some inspiration drawn from that musical era. His simplistic but effective guitar solos further reinforce my assumptions.

The band is tight, and although a late addition to the line-up (more about that later), they draw a great crowd response even though it seems that they are mostly playing to a crowd that has never heard them, or their songs before. They pull out a cover of The Cure‘s In Between Days towards the end of the set, which further draws the crowd’s attention and gets them all singing along.

A song or two later a random punter then yells out “play Jawbreaker” so the band obliges and plays a track by the name of Boxcar which again drew a great response from the ever-growing crowd. They finish their set with a straight-up punk rock banger and like true professionals quickly pack the fuck up and get off-stage to make way for Being Jane Lane.

The all-female line-up take the stage with more straight up punk rock attitude than I’ve seen in a long time. And I’m not mentioning their birth genders to gain them any equity in the music scene because they sure as fuck don’t need it. Their music and performance speaks for itself, in volumes.

Forget the bad hair and the questionable fashion because this punk rock crowd sure as hell doesn’t give a shit once the band starts rocking out. Vocalist Teigen absolutely owns the stage with ridiculous energy and demands the crowd’s attention at every moment. A crowd which is drawn in to sing along to the final chorus in Be Ok which results in a massive response and applause at the end of the song.

Some satirical twerking further adds to the interaction of the crowd, as all the ladies in the house are now dancing along to every song. At this point, the band has drawn nearly all of the cool kids from the beer garden inside to check out what all the commotion is about. And just in time for Jodie from Flangipanis to be announced as fill in guitarist for the night. I absolutely had no idea, as she seemed to have performed every song as if they were her own, and somehow fit right into the style (lack thereof) and charisma of the band during a great performance with loads of crowd interaction and massive responses after every song.

Now, with a name like Flangipanis I was expecting another all-girl line-up. Knee-high pink and white love heart socks and a pink hello kitty guitar were my first impression of the band, but they were being adorned by a male guitarist. Never mind the Robocock shirt, that’s another story all together.

Anyway, the band opens with a call of “Oh Yeah Cunts, Happy Fuckin New Year Eve” and they immediately burst into some punk as fuck rock. This band is all up in your face, and the performance flows very quickly from each one-minute punk banger to the next, so it’s a bit hard to keep up with it all at times. I did mention to catch something about sucking clits and something a little later about sucking dicks. Yeah, you get the idea.

After apologising for telling our photographer to “fuck-off” after the fifth song, the band slams into another 4 or 5 one-minute punk bangers before performing a song called In the Bin, which apparently has something to do with 2021 and cunts. Seems fair, and they follow up with another song about taking drugs into your 60s, and another about shit haircuts. They must have played about 15 in your face expletive songs by now, but in the middle managed to slip in a serious song about domestic violence which ended in a call of “we can runaway”.

Following a speech about how it’s ok to be a shit Aunty, the band plays a song including a clap along section before rocking into their final track which was laced with some thrash style riffing.

Oh yeah, and I shouldn’t forget to mention that we all got blasted with a toilet paper cannon a few times during the set, which was a good reminder that the filthy Rona had put this gig on hold for way too long.

And here it is, the moment we’ve all been waiting for.

Well, not really, but the synth pop soundtrack leading up to the band coming onstage was given a little sweetener when Lindsay“The Doctor” McDougall serenaded us with Foreigner‘s I Want to Know What Love Is as Jay and the rest of Frenzal Rhomb materialised on stage.

Once that was out of the way, Jay quickly asked us all “How the fuck are ya?”, and the band got into telling us how that Russell Crowe blokes’ band is a fucking pile of shit. Now, I’m not gonna give ya all a blow-by-blow, with a track-by track review of the set list because I wouldn’t want to spoil the chance of you never having so much fun by experiencing it first-hand like a punch in the face.

Let’s just say, though, if you got the lame lyrical references that I just spewed out of my pie hole, you’re gonna have one hell of time singing your lungs out. I’m not sure whether Jay was just fucked, or just couldn’t be fucked, but he gave the crowd many frequent opportunities to scream those classic choruses at the top of their lungs. Let’s just hope that no one in the crowd had the filthy Rona, or we all might be fucked in a few days.

They carried on with plenty of their usual banter onstage, including setting off some party poppers, one of which even backfired and blew up in the Doc’s hands. Somewhere in between all the banter, Jay also took the chance to call out some macho dickhead in the pit who was causing trouble and explained that we are all friends and that he should probably just fuck off.

Jodie from Flangipanis joined the band onstage for a dual guitar rendition of that song about the chick who only want’s you for your drugs and shortly after all members of the support bands were welcomed onstage for what we all figured was the countdown to New Years. And we got the countdown, but we also got an all-band member, all audience member rendition of Never Had So Much Fun, and party poppers, more party poppers.

From that point on, it was pretty much a party of their greatest hits, and we all rocked our way into the new year. I’d tell you all what song they finished on, but that would just spoil the fun. Let’s just say that the Moshpit was crazy, and a few people probably ended up with some unwanted but somewhat necessary physical contact.

What a great way to end a shit year and start the new year. A year which will hopefully be full of many more live shows at full capacity in great venues with great bands. Well, if they all get their jabs, unlike the other band that had to pull out of this bill because they couldn’t get their collective covid shit together in time. Luckily though, Ghost College were there to fill the gap, and hold up the weight of this great night alongside Being Jane Lane, Flangipanis and the always entertaining Frenzal Rhomb.

Make sure to check out the tour when it comes your way!