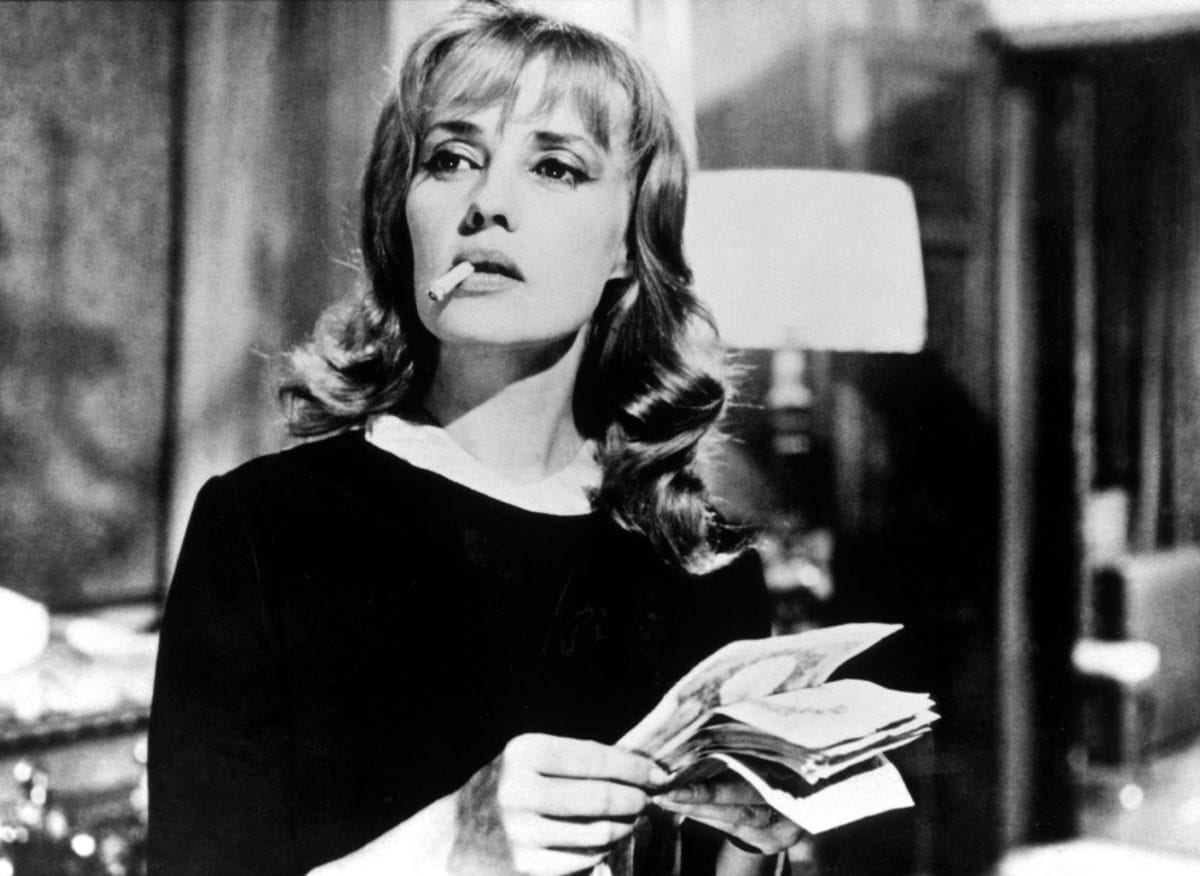 The Alliance Française Classic Film Festival is returning to Melbourne for a fourth season of eternal French Cinema from 8 to 11 November at the Astor Theatre.

In association with Palace Cinemas, Hayden Orpheum Cremorne and WA Maritime Museum, the Alliance Française and StudioCanal are holding this evocative event following the unparalleled success of the 2018 Alliance Française French Film Festival.

Following its successful Sydney season, the Festival will now be heading to Melbourne and Perth to present6 enduring cinematic gems, along with an Opening Night event in both cities.

Since its debut, the Alliance Française Classic Film Festival has been showcasing French cinema classics, honouring the actors and directors who have made an enduring contribution to France’s much celebrated film industry.

Featuring some 5500 titles spanning 100 years of the history of cinema, StudioCanal’s film library is one of the finest and most comprehensive in the world. To grant as many people as possible access to these film masterpieces and ensure their longevity, a huge project to digitise them all started back in 2005: currently, half of the library is available in HD, and more than a hundred titles are available in 2K or 4K. Marcel Carné’s “Port of Shadows”, David Lynch’s “Mulholland Drive”, Luis Buñuel’s “Belle de Jour”, Mike Nichols’ “The Graduate” and James Cameron’s “Terminator 2” are just some of the films which have already been restored as part of StudioCanal’s project.

With the sad passing of Jeanne Moreau, aged 89, last year, the Festival is paying tribute to this legendary actress of La Nouvelle Vague. The 2018 season will present 6 of her most renowned films from 1958 to 1991.

Moving from stage to cinema in the 50s, Moreau achieved national recognition with starring roles in controversial and landmark films. She performed with many of the leading art-house directors of the time including Roger Vadim, Michelangelo Antonioni, Luis Buñuel, François Truffaut and Louis Malle who recognized her as “the prime stage actress of her generation”. Her professionalism and strength of character charmed many directors, including Orson Welles who considered her the “best actress in the world”.

Actors such as Michel Piccoli, Jean Paul Belmondo, Michel Serrault, Lino Ventura and many more will join Moreau under the spotlight for 4 memorable days in Sydney, Melbourne and Perth.

A new release of Louis Malle’s 1957 masterpiece of suspense and film noir starring Jeanne Moreau, in the role that catapulted her to international stardom.

Florence (Jeanne Moreau) is married to the wealthy arms dealer Simon Carala (Jean Wall), but is involved in a scandalous affair with one of her husband’s employees, Julien (Maurice Ronet). Julien daringly climbs into Simon’s office with a rope and kills him without leaving a trace- or so he thought. Julien accidentally forgets the rope at the crime scene and soon realises he must retrieve it. On his way out, he gets stuck in the building’s elevator- and this is just the beginning of his bad luck.

Associated by some critics with the film noir style, and introducing new narrative and editing techniques, the film is considered an important work in establishing the Nouvelle Vague and the New Modern Cinema. Its musical score by Miles Davis and the relationship the film establishes between music, image and emotion, are elements that remain ground-breaking to this day.

Considered as a new wave masterpiece, Peter Brook’s Moderato Cantabile (1960) was based on the 1958 eponym novel Moderato cantabile by the great Marguerite Duras.

Anne Desbaredes (Jeanne Moreau) is the bored wife of a steel industrialist in the half-forgotten village of Blaye in southwest France. Her son, Pierre, and his weekly piano lessons with his teacher are the only things that seem to make her life interesting until one day, while listening to Pierre practicing a sonatine, she hears a woman scream from the cafe below the teacher’s studio. Anne looks down upon the scene and witnesses a frightened man being taken away from a dead woman’s side. Curious about the passions that must have motivated the crime; she visits the cafe and encounters one of her husband’s employees, Chauvin (Jean-Paul Belmondo), whose inquisitive and reflective mood mirrors her own. During the next following days, they use the murder they witnessed as an excuse to meet but instead, they end up connecting while talking about their own lives.

Moderato Cantabile marks an important milestone in Jean-Paul Belmondo’s career as it is the first film in which he is not asked to portray a “bad boy”. Instead, he interprets a more complex and mature role, given to him by Jeanne Moreau who wished to share the screen with him. The film was in the official selection of the 1960 Cannes Film Festival and Jeanne Moreau won the award for Best Actress.

Eva (1962), adapted from James Hadley Chase’s book of the same name, marks an under-appreciated part of Joseph Losey’s career. The film was actually supposed to be directed by Jean-Luc Godard, who quickly abandoned the project when his request to have Richard Burton take on the male lead was rejected.

Tyvian Jones (Stanley Baker), a pretentious and arrogant liar, creates a flattering image of himself when using his own name to get the rights for his late brother’s autobiography. In need of inspiration for his next story, he goes to a secluded island near Venice when he unexpectedly falls in love with Eva (Jeanne Moreau), a stunning and manipulative woman who quickly entails him into a vicious spiral of total delinquency. While Tyvian is engaged to Francesca (Virna Lisi), an alluring screenwriter, he follows Eva to Rome and soon enough, she manages to manipulate him psychologically: the masculine figure is led into a perverse game of seduction, dominance and humiliation.  While in Rome, Tyvian has to rush back to Francesca because they are supposed to get married but when Fransesca finds Tyvian and Eva together, things take an unexpected turn…

Losey’s film depicts the Genesis’ new Eve, incarnated by Jeanne Moreau, turned into a malicious snake, and offers display of the decadent decline of men.

In Montparnasse, Paris, during the early 1900’s, Jules, a shy, serious German, and Jim, an easy-going Frenchman, form a solid friendship and share a common interest for arts, sports, and women. Catherine (Jeanne Moreau), a capricious and whimsical young woman begins a relationship with Jules, although both men seem to be affected by her presence and her attitude toward life. A few days before the war is declared, Jules and Catherine move to Austria to get married. Once on the battlefield, the two friends, fighting on opposite sides, live in constant fear of shooting each other. Their friendship takes a turning point when, after the armistice and upon his visit to Germany, Jim discovers that Catherine has been having affairs with other men…

According to The Guardian, the film is regarded as the audacious apotheosis of the French New Wave. It won the 1962 Grand Prix, the Étoile de Cristal, and Jeanne Moreau won that year’s prize for best actress. The film was also ranked 46 in Empire magazine’s “The 100 Best Films Of World Cinema” in 2010.

Adapted from Octave Mirbeau’s novel published in 1900, Diary of a Chambermaid is a superb release of Luis Buñuel’s complex directorial style.

Set in the 1920s, Célestine (Jeanne Moreau), a stylish, attractive young woman, finds work as a chambermaid in a country chateau. Her employers, the Monteils, are an eccentric family- a frigid wife, a lustful husband (Michel Piccoli) and a father with a foot fetish. Adding to this mix is Joseph, (Georges Géret) the fascist farmworker, who expresses his desire to be with Celestine. Amidst this scenario, the usual calmness of the village is suddenly interrupted when a little girl is found raped and murdered close to the Monteil residence.

This bitter tale where morals overlap with desire is the first collaboration between Luis Buñuel and Jean-Claude Carrière who would together later produce the well-known “Belle de Jour” with Catherine Deneuve.

The Old Lady who Walked in the Sea (1991), directed by Laurent Heynemann, is one of 5 films in which Jeanne Moreau played part in 1991.

Under the sun of Guadeloupe, Lady M. (Jeanne Moreau) walks in the sea, fully clothed, made up, covered with jewels and an elegant hat, in the arm of a young beach-boy, Lambert, who she decides will be hers and hers only. With her old companion Pompilius, former Romanian diplomat, she introduces him to their favourite sport, scheming, for which he already seems to show his talents. Mazurier, an industrialist from Lyon, in the act of adultery, becomes the victim of their blackmail. When the old couple decides to return to his villa on the Côte d’Azur, Lambert follows, to Pompilius’ sadness, who won’t allow to be dethroned by this white-bill.

The film is an adaptation of the eponym novel by Frédéric Dard, who’s deliciously vulgar words are rendered almost poetic by Moreau. For her performance in this movie, Jeanne Moreau received her first César Award as Best Actress in 1992, before receiving the Honorary César in 1994.

Remaining dates and venues for the 2018 Alliance Française Classic Film Festival are: