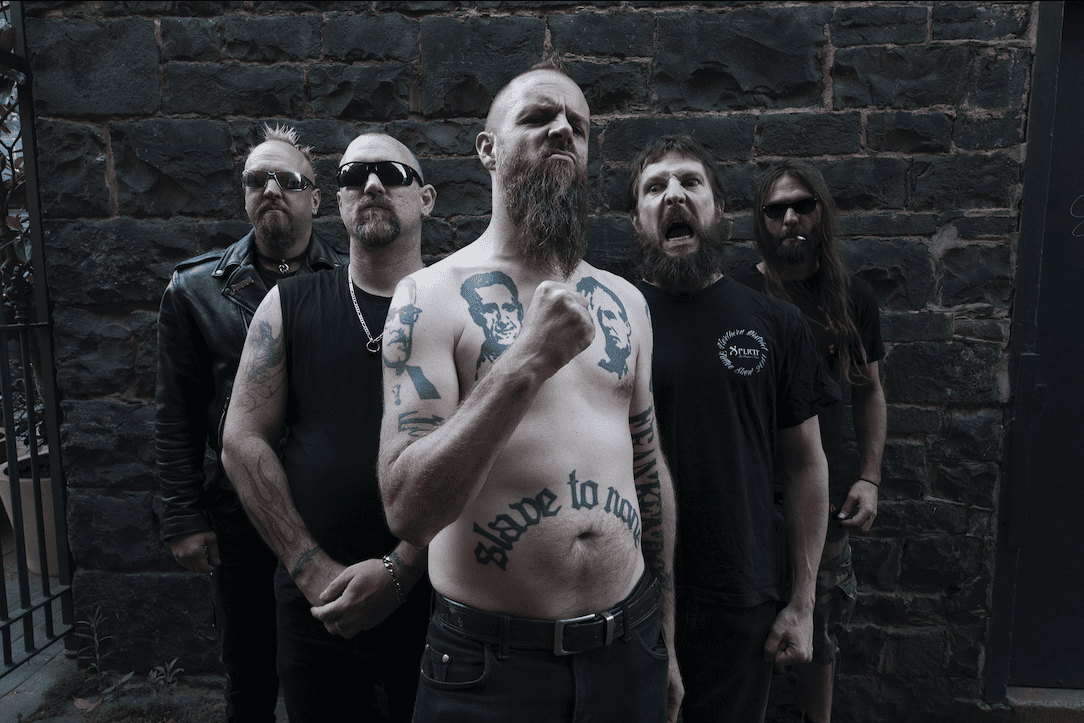 Once a relationship has fractured to the point of separation there is little need to retread old ground. The old adage of if it didn’t work the first time it never well has been proven in both life and music but there are exceptions to the rule.

Sometimes that unique but departed person merely needs to re-energize and gain back the drive and hunger that saw the relationship thrive and prosper when it mattered. Sometimes that separation is needed, although not popular at the time, but in the rare instances where both parties are prepared to focus on the future instead of dwell on the past the strengths of the individual become the strengths of the collective.

When Frankenbok parted ways with vocalist Dan McDougall in 2015 diehard fans were devastated. McDougall was widely acknowledged as the band’s premiere vocalist out of the handful that had fronted the band, with his intensity and menace only matched by his aggressive nature. He led the band by example, with no quarter given but plenty taken.

Unfortunately, with personalities such as this the highs are matched blow for blow with the lows and after a period of unrest and instability McDougall left the band and was replaced by Dan White. Although White was a more than adequate replacement whispers continued to fester that McDougall’s exit had detracted from the aura that surrounded Frankenbok with some openly campaigning for his return.

When White left the band towards the end of last year and the band put out a statement saying that a replacement was being considered in-house only the most optimistic dared to believe that a return from McDougall was possible. As more time passed before the bands next gig in late January the whispers gained traction until today’s announcement that McDougall would, in fact, take his spot front of stage. Hopefully gone would be the friction that caused the break-up and in its place a renewed sense of unity that would see Frankenbok return to full force.

“It feels fantastic, absolutely fantastic”, grinned McDougall when pressed how it felt to finally be able to speak publically about his return. “We had another rehearsal last night and the band is on fire! We’ve got a thirty minute set at Blaze and we were trying to squeeze in too much so we ramped it up by a couple of BPM’s on the last run through and it was way too fast (laughs). Right now I have to say that I’m very happy to be back in the band but in a way, I never really left. I just kind of changed positions. My other band Never and Frankenbok both rehearse out of the same place here and I continued to do stuff for the band behind the scenes. I made film clips for them and recorded the last album so I went from being the vocalist to behind the scenes so it hasn’t been much of a stretch really. I live at the rehearsal studio so every practice for the last year and a half I have been present at”.

When White and Frankenbok parted ways in December that close proximity worked in McDougall’s favor.

“Prior to Frankenbok touring Japan in November, I had been thinking about vocals a little bit. It was the first time in a few years that I had seriously considered singing again and prior to the boys leaving I did a recording of them running through the set in the rehearsal room minus Dan who had left early that night. After they left I had a bit of a play with it singing over the top of the music and it felt good. I already knew most of the songs so I cranked them through the PA and belted them out. When the band got back Azza (guitarist and founding member) had a chat and he explained the situation to me and said that while the tour was unbelievable things weren’t so great on a personal level. I got the impression Dan wasn’t fitting in with the rest of the guys and it became apparent that they would be in need of a new vocalist pretty soon. I told Azza what I had been playing around with and how good it felt and he asked if I wanted to play the next show at Blaze and I said fucken oath! That’s pretty much where we left it but I felt that I needed to get in the room with the guys and feel it out before making a firm decision to commit but after the first jam, it was blatantly obvious that there was some serious energy there. After a couple more it felt better than it ever had before. Everyone was exceptionally tight and the energy was definitely there. It’s a whole new band from when I left with the exception of Azza so I needed to see how it felt with those guys but the minute we started… it was a feeling you can’t do justice with words alone”.

At the time of McDougall’s departure rumors circulated that drugs and alcohol had played a major factor in the split. Despite refusing at the time to fuel the fire by responding McDougall now states that the rumors were just that.

“Unequivocally no”, he affirmed of the claim. “I’m not sure where people got that perception from but it possibly came from the book that came out about the band itself. Yes, there were issues related to alcohol and stuff like that but I’d given up drinking about a year before I left. It wasn’t about that. The band at that point in time was a mess. We spent more time in band meetings and trying to agree what we wanted to do going forward than we did actually rehearse. The band was on the verge of a total meltdown. It was a gut feeling for me that I needed to step down and I also have to say that stopping drinking played a big part in it too. It was part of what brought out the animal in me that got me up on stage and do what I did. Once I stopped that it was hard to get that feeling. I wasn’t 100% committed to it anymore and I had that feeling that I needed to take a break. I felt it was necessary for the band to move forward. I felt that if I left other things would happen and that’s kind of the way it worked out. People started to leave because… quite frankly it wasn’t enjoyable any more”.

Musically, Frankenbok’s current line-up is widely regarded as the best since the band’s formation. While this alone was enough to further McDougall’s desire to rejoin the band he also knew he had to bring something formidable to the table himself. It wasn’t enough to simply slide back into the driver’s seat. He needed to provide something more than just a vocal presence.

“Unbridled conviction my friend”, he sneered when asked what he would provide. “I don’t fuck about, especially when I’m on stage. Here’s the thing. I don’t necessarily listen to this kind of music anymore. My tastes have mellowed quite a bit, but to play it invokes a feeling that is so primal and it’s something that is undeniable. When you are in a group of guys and you’re all channeling this thing together you can’t help but be completely overtaken by that feeling. I don’t necessarily think that I’m the greatest vocalist in the world. I don’t give a shit about that. What I give a shit about is conviction and what I give a shit about is doing it like you mean it. For me, this music brings that out naturally. I am absolutely chomping at the bit. I can’t wait to get back up there and unleash the fury in Ballarat on Australia Day. It’s been four years. I didn’t miss it for a long time and it wasn’t until I started thinking about it and got in there that I started enjoying it again and understanding that this is an innate part of me that for some reason I need to scream like a lunatic (laughs). It’s my way of expressing my pent up rage and frustration and anger. Everybody has that shit but not everyone has a way to express it. That’s what has always driven me to do this”.

Knowing that the initial enthusiasm that will greet the return of the prodigal son will not be enough to carry the band alone, Frankenbok are armed with a battleplan to coincide with the announcement and understand they will need to back it up with results.

“Now that this has happened it’s time to think about what Frankenbok can do and what the band is now”, McDougall said. “We’re looking at a completely new entity. A name is a name. Frankenbok is a name that has gone on for twenty years but it has changed so much in that time. Now we’re looking at a completely different band. I am now fronting a completely different band. We have to go out and prove ourselves again. We wanna start small and play a bunch of local shows and get out there and make people take notice. It’s a new band so let’s forget about the fact we have been around for twenty years because we haven’t. Not this incarnation. This is a new band; the name doesn’t mean anything. For us, it’s firstly about proving ourselves again. I’m about to turn 40 and the other guys are around the same age and I think it’s incredibly refreshing and equally important for us to be able to do that. We should have given up the game a long time ago but we refuse to do that. The energy coming from us now is like a bunch of 20-year-olds, that’s exactly how it feels. We don’t give a shit about the fact we’re 40. Fuck age, that doesn’t mean shit. We’re gonna play a bunch of shows and we’re gonna write a bunch of new shit. We’ve already started. Azza brought a couple of riffs to the table last week and we’ve already got a new song almost done. Since I left the band has gotten a new drummer, new rhythm guitarist and new bass player so it’s a whole different dynamic. I’m really excited about what kind of music this band will produce. It’s totally different to what we had before so I’m really excited to plunge the depths and explore what these guys are capable of. It’s gonna be brutal, make no bones about that”!