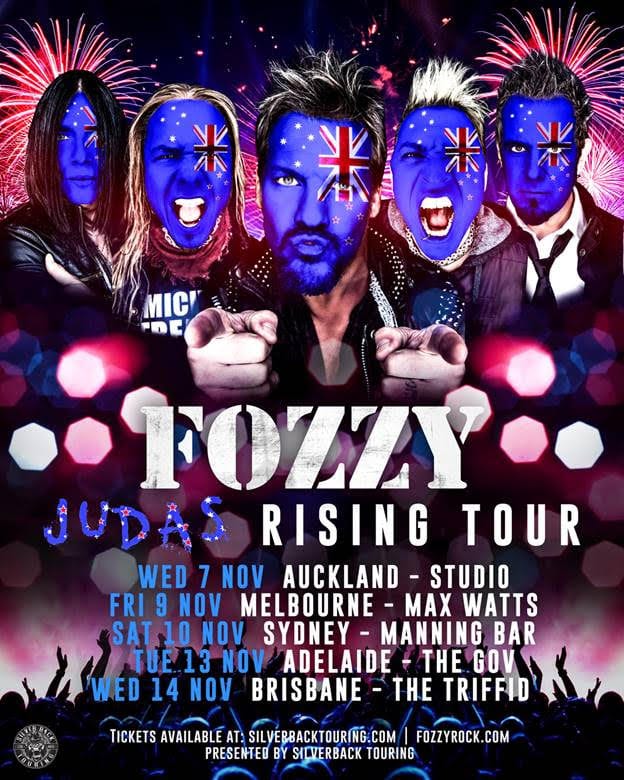 Following their most successful US & UK tours EVER, Fozzy is bringing the Judas Rising Tour to Australia for their first headline run since 2010 & their first Aussie appearance since 2013! Armed with two top 10 US Active Rock hits off their monster record ‘Judas’, the band is ready to turn the country into Fozztralia once again this November and for the first time ever New Zealand!

The band is firing on all cylinders with Rich Ward, one of the most versatile, underrated riffers in rock n roll and Chris Jericho, who’s vocal range and passion for music makes one wonder just how he is able to excel in pretty much everything he does, destroying stages worldwide. Throw in the powerhouse rock solid drumming of Frank Fontsere, the blazing leads of Billy Grey and the genius & energy of returning bassist Paul DiLeo and it’s no surprise that FOZZY has skyrocketed into becoming one of the hottest rock acts in years.

Chris Jericho comments: “We are so excited to return to one of our favourite countries in the world…and the fact that it’s our first time in five years makes it even better! The Judas Rising Tour has been our most successful ever and we can’t wait to tear up the stages of Fozztralia, with the high energy, can’t miss show that Fozzy has become famous for! We can’t wait to see all our old friends who’ve been coming to rock with us since 2005, as well as make heaps of new ones…so put on your seatbelt and grab a helmet as this is gonna get CRAZY!”

But as much success the band had enjoyed, nothing compared to the juggernaut single known as “Judas”, lifted off the album of the same name. The song spent 5 WEEKS at NUMBER ONE on the highly influential ‘Big Uns Countdown’ on Sirius/XM’s Octane channel, amassed over 20 MILLION views for its video on YouTube and stormed into the TOP 10 on the US Rock Radio Charts, where it was joined by the second single “Painless”. FOZZY is back on the road on their wildly successful Judas Rising Tour and now it’s Australia’s turn. FOZZY is coming back to bring the high energy, can’t miss rock show that that is their trademark, down under! It’s the perfect time to remind the world that not only is Judas Rising, but so is FOZZY!

Check it out below!