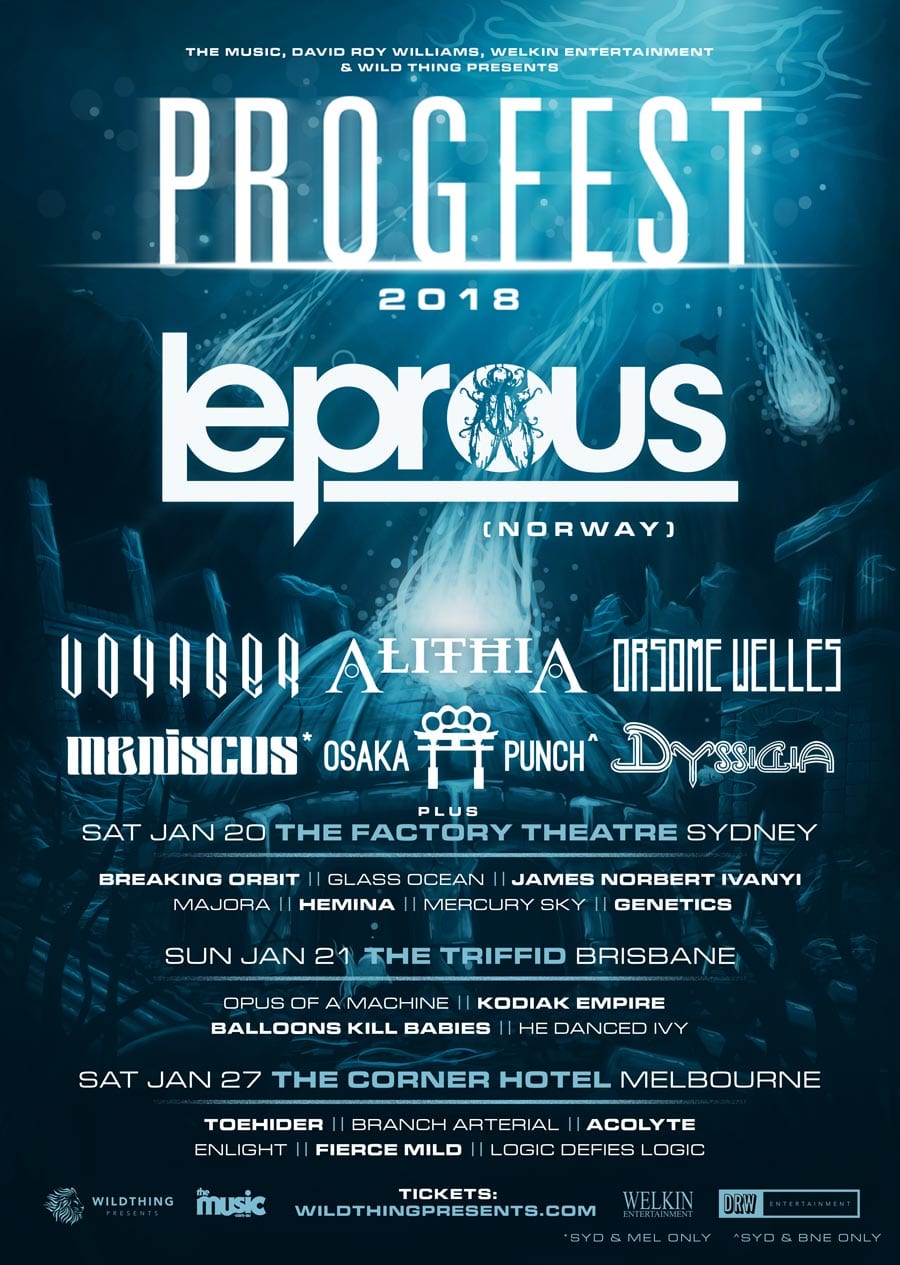 The 2018 line up of Progfest will be the strongest yet with Norway’s LEPROUS confirmed to headline all 3 Progfest festivals, plus headline their own sideshows in Perth and Adelaide!

Some of Australia’s finest acts including Voyager, AlithiA, Orsome Welles, Meniscus and Dyssidia were confirmed for Progfest as part of the first round announcement.

The full national line up for all festival shows can now be revealed. Confirming a massive 24 bands will be taking part across the 3 festivals.

Osaka Punch: These Brisbane genre benders deliver a tonne of groove and extremity in equal measures. Their virtuosic high energy show has forged them a reputation as one of Australia’s most wildly entertaining live acts. The group’s distinctive fusion of funk jams, jazz chops and a rock ethos sets them apart from most heavy acts, and allows an element of humour and satire in an otherwise very serious scene.

Toehider: Melbourne’s world-acclaimed singer/instrumentalist Michael Mills and his band of merry men, aka the prog power trio Toehider, bring their unmissable show to Progfest on the back of their latest release GOOD. Featuring Mills’ unmistakable, otherworldly voice and signature bizarre storytelling lyrics, stadium-worthy guitar melodies and driving classic rock rhythms, Toehider is a prog cult classic known the world over, with prominent admirers such as James LaBrie (Dream Theatre), Devin Townsend and Aryeon!

Glass Ocean: Boasting maturity beyond their years, and earning a reputation as a ‘must see’ live act with their modern take on late 90’s progressive pop laced with sensuality, Sydney’s born and bred Glass Ocean are one of Australia’s most prominent up and coming acts.

James Norbert Ivanyi: One of the most original, commanding and versatile young guitarists on the scene today. His unique style of technical modern metal fused with the classic sounds of 1960’s and 1970’s progressive rock music have seen his fan base transcend generations and genres.

Branch Arterial: Following near life-ending experiences for two of their members, Branch Arterial have risen from the ashes to release their strongest album yet Beyond The Border. A unique and distinctive sound derived from the desire to push musical boundaries, don’t miss one of Australia’s most spine-tingling onstage performances.